No, Wild Fire isn't the name of a Buick engine, it's actually what happened to one. Buicks generally don't spontaneously catch on fire, but one of SCG's many friends had just that experience with his '66 Buick Electra 225 convertible. It seems he and some friends returned from an evening in town, having enjoyed a top-down drive back home. As they were entering the house someone noticed that the Buick had started itself once again (the keys were in the owner's pocket at the time!) and thick smoke was billowing out from under the hood.

Quick thinking took place as the group opened the hood and yanked the battery cables off before flames got much chance to spread. A subsequent dowse with the water hose insured no further issues and the car was left to dry off overnight. The next morning Nick, the owner, surveyed the damage and saw that the entire plastic-wrapped wiring harness from the engine to the firewall and then to a terminal block on the passenger side fender well had seemingly melted. He asked our permission to have the Buick towed to our garage and, of course, we couldn't pass up the troubleshooting challenge.

Our first step in figuring out what went wrong was to pull the harness off its mounting brackets and cut off the plastic wrapping to expose the individual wires. We noted that all the wiring in the partially melted harness led to the engine itself, with the exception of one orange/black colored wire that connected to a relay on the firewall. The rest of the wires led to the coil, temperature sensor, oil pressure sensor and the alternator. At the end where the harness merges with other wiring there was no obvious damage, so that meant we'd only have to make repairs to the exposed segment. 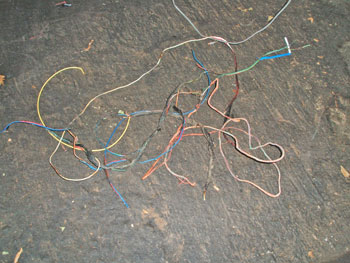 This is what was left of the Buick's original wires - a mess!

A Bit Of Luck

As we removed the battery wire off the alternator's main terminal we immediately noticed what had caused the fire in the first place. The upper A arm pivot shaft bolt had loosened and its thick compression washer (that puts compression on the A-arm bushing) had moved along the bolt shaft toward the front of the car. Unfortunately, the alternator's battery terminal post was within a few millimeters of the A arm bolt, so the washer contacted the terminal. The result was a dead short to chassis ground, which attempted to discharge the battery through the alternator's wire. Since the wire was too thin to carry all that current it glowed red hot, melting its insulation and setting fire to the plastic wrappings. 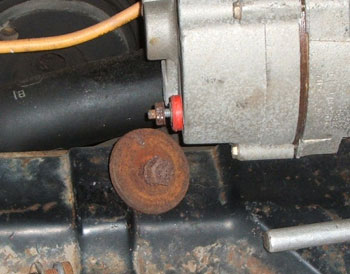 The bolt, washer and alternator are positioned like they were in the car to show how the short occurred. 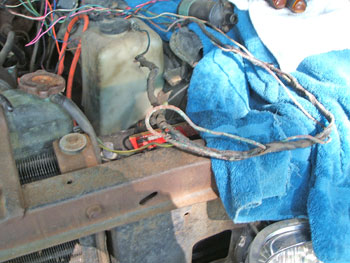 The wire in the foreground is the melted alternator wire.

We could have searched around for an expensive NOS or reproduction engine bay harness but this Buick isn't a show car or restoration. Besides, we prefer to wire our own harnesses using high quality automotive materials. We cut the original wires back where they were in good condition and added in the proper length — and gauge — replacements. All connections were soldered, making the repairs as good or better than the originals. When we didn't have the proper color wire we used our color tape kit to wrap the replacements. That way, if a future mechanic searches through the harness he/she will see the color-matched tape and realize what was done. 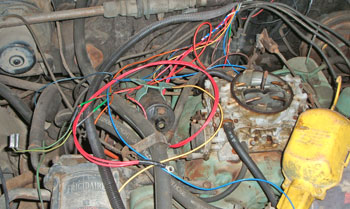 The new wiring is ready for running and connections. Note the double-thickness battery wire for the alternator. This will handle the 65 amp alternator. 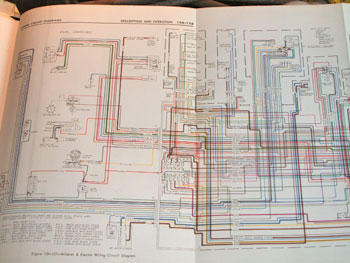 The factory wiring diagram helped to trace the burned-out wires.

It took a while to replace all the wires and test each for continuity. We obtained a replacement alternator that is slightly different from the one we removed. Its battery post doesn't come near the suspension bolt but now the connector to the field and indicator lamp interfered with it. We made a few alterations to the connector to allow the wires to come out at a right angle, thus giving some clearance to the bolt. 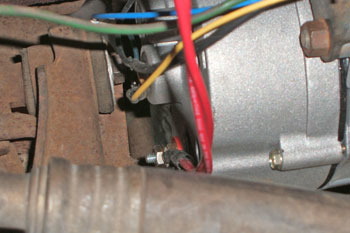 You can see the tight clearance of the blue and white regulator wires from the suspension bolt. The battery post isn't all that far away either.

Once the alternator was installed and the rest of the wires routed and connected we replaced the main battery cable. No sparks ensued, so the next step was to turn on the ignition and test the dash controls, lights, radio, etc. for operation. So far so good, so we poured a little gas into the carburetor and cranked the engine. The big Wildcat engine fired to life and settled to a smooth idle after a few moments, after which we measured the output voltage from the alternator to see if the regulator was still working. It was, and we were getting 14.5 volts at the battery. We let it run for a few minutes and periodically felt all our new wires for heating. They were perfectly cool and everything operates as it should. Success!

All that was left to do was to "dress" the wires into a plastic casing and run them neatly over the engine. That was accomplished fairly quickly and we were done. 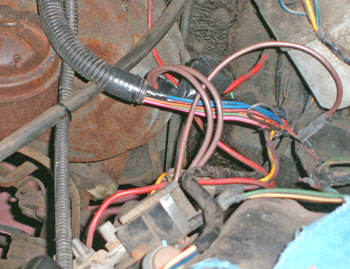 The new plastic harness is covering the wires up to where they enter the firewall opening.

Uh, Well, Not Quite!

We'd never been in the Buick before and were anticipating a test drive in the old beast. We always take a short test drive after repairs, just to make sure the work was done properly and there are no surprises later. The good news is that our electrical repairs performed well and the wiring is robust. The bad news is that the brakes don't stop the car! Therefore, you're going to see a follow-up article on what we found. (See New Brakes for a 1966 Deuce & A Quarter)