Tires: Where the Rubber Meets the Road

Without a doubt, tires are the most crucial component of any vehicle, because without them, you're not going anywhere. Regardless of how much horsepower you have, whether your engine is carbureted or fuel injected, whether your transmission is a 6-speed manual or an automatic, whether your ride is a sedan, a coupe, a convertible or even a truck, the fact remains: you've got to have tires that will support the vehicle in order for you to have mobility.

The fundamental materials of modern tires are rubber and fabric along with other compound chemicals. They consist of a tread and a body. The tread provides traction while the body ensures support. Before rubber was invented, the first versions of tires were simply bands of metal that fitted around wooden wheels in order to prevent wear and tear. Today, the vast majority of tires are pneumatic, comprising a doughnut-shaped body of cords and wires encased in rubber and generally filled with compressed air to form an inflatable cushion. Tires have come a long way since they first appeared on the scene. Here's are some highlights in the history of tires for your edification: 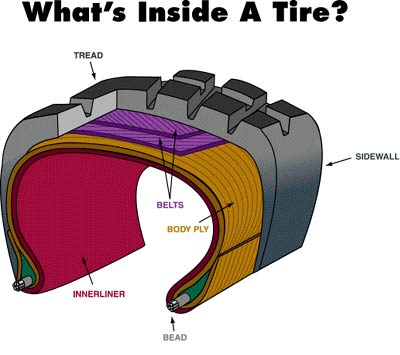 TREAD: Provides traction and cornering grip; BELTS: Stabilize and strengthen the tread; SIDEWALL: Protects the side of the tire from road and curb damage; BODY PLY: Gives the tire strength and flexibility; BEAD: Assures an air-tight fit with the wheel; INNERLINER: Keeps air inside the tire.

From Tubes to Tubeless

Prior to the '50s, all tires had inner tubes, which were so fraught with problems that flat tires were a common occurrence. The tubeless tire was invented by B.F. Goodrich in 1947 which used reinforced beads to seal against the rim of the wheel to keep the tire inflated without using an inner tube. Tubeless tires quickly caught on and, within a decade, became the exclusive choice of most automakers because they offered more ride comfort and were less prone to puncture and high speed tire bursts compared to conventional tubed tires. But flats were still a fact of life so, out of necessity, a spare tire and the tools for mounting it remained standard equipment on every car and it was the responsibility of all drivers to know how to use them.

Although modern improvements in tire design and the advent of "road service" have insulated many drivers from the flat-changing experience, the need to carry a "spare" has not been eliminated — unless you're running "run-flats".

To automotive engineers, who are continually looking for ways to improve space utilization in new vehicles, the spare tire and associated tools represent space hogs. Certainly the room they take up could be put to better use. And so, various solutions have been proposed, but until now most have met with limited success.

Carmakers have attempted to eliminate the spare by providing a small air compressor and an aerosol can of tire sealer. When you have a flat, you can presumably re-inflate the tire while sealing the puncture. Of course, anything larger than a simple puncture and you are in trouble. Other manufacturers have addressed the problem with a type of run-flat tire that features stiffened sidewalls that allow them to be driven at moderate speeds with no air pressure. This solution is less than ideal, since the inflexible sidewall can adversely affect ride quality and, in some cases, handling, but it's still better than having to carry a spare, a jack and a lug-wrench around in your car — or at least, that's what many people believe. But, like everything else in life, there are two sides to the run-flat coin, so let's take a look at both sides now.

You can drive on a flat tire — The chief benefit of a run-flat tire is the ability to drive 50 or so miles after all air has gone. Drivers usually have to reduce speed to about 50 mph to get that range. The owner's manual will have exact figures for each tire/vehicle application.

Better stability after a blowout — Because the tire can support the vehicle without air, a sudden deflation results in less weight transfer and tread destabilization. Steering and handling remain near normal.

Lower vehicle weight — With the spare eliminated, and sometimes the jack and tools as well, vehicle weight should theoretically go down. It's not as much as expected, because run-flat tires weigh more, owing to those reinforcements.

Repairability — Run-flat repair guidelines are nearly similar to those for standard tires. If the zero-pressure driving distance or speed is exceeded, the tire might need outright replacement. Furthermore, tire sealant-in-a-can leak repair products shouldn't be used, because they can foul many types of TPMS air-pressure sensors.

No spare — Run-flat-equipped vehicles carry no spare, and sometimes the jack and tools are omitted as well. In fact, eliminating the spare and reallocating that space to some other purpose (e.g., luggage stowage, etc.) is a big reason why run-flats are offered.

Harder ride — The stiff sidewalls that make a run-flat work also result in a harder ride. And, while the suspension tuning can be adjusted to compensate, the loss of tire compliance is never fully recovered.

Tread wear — It's a fact that run-flats have a shorter lifespan than standard tires. As you might expect, the temptation to put a soft tread compound on a tire to counter a hard ride is strong. But the downside with this approach is that softer compounds tend to wear more quickly; so a compromise had to be struck in the formulation.

Blowouts are still possible — If a driver fails to heed or notice the run-flat warning and drives beyond the zero-pressure range or above the speed limitation, tire disintegration can still ultimately occur, with the same destabilizing effects.

Heavier tire weight — Run-flat reinforcements add weight. And it's all unsprung weight, the bad cholesterol of vehicle mass that degrades ride and handling. Depending on the brand and model of run-flat, this may amount to a few pounds to 10 pounds or more per tire, which could add 40 or more pounds per car of added unsprung weight.

Cost — Run-flats cost more money to replace. Compared to standard tires, expect to pay as much as double or more, again depending on the brand and models of run-flats compared to conventional tires of the same size and load ratings.

So these are definitely things you may want to consider seriously before you opt to forego your conventional tires and replace them with run-flats on your vehicle - whether it's your everyday driver or your collector car.

How Tires are Made

As many as two hundred different raw materials combine into a unique mix of chemistry, physics and engineering to give consumers the highest degree of comfort, performance, efficiency, reliability and safety modern technology and creativity can provide. Here are the basic steps:

Planning and Design — Many tires are custom-designed to meet the stresses and performance needs specified by the maker of a particular model vehicle. The process begins with a computer, which converts the mathematics of the car's special needs into specifications. A prototype tire is then made to test the tire design's ability to provide the desired characteristics. Custom-designing a tire for a particular vehicle typically takes many months of testing, inspection, and quality checks by the tire maker and the vehicle maker. Only then does the vehicle maker commit with an order.

Manufacturing — The production process begins with the selection of several types of rubber along with special oils, carbon black, pigments, antioxidants, silica, and other additives that will combine to provide the exact characteristics wanted. Separate compounds are used for different parts of the tire. A machine called a banbury mixer combines the various raw materials for each compound into a homogenized batch of black material with the consistency of gum. The mixing process is computer-controlled to assure uniformity. The compounded materials are then sent to machines for further processing into the sidewalls, treads or other parts of the tire.

Assembly — Then the task of assembling the tire begins. The first component to go on the tire building machine is the innerliner, a special rubber that is resistant to air and moisture penetration and takes the place of an inner tube. Next come the body plies and belts, which are often made from polyester and steel. Plies and belts give the tire strength while also providing flexibility. The belts are cut to the precise angle and size the tire engineer specifies to provide the desired ride and handling characteristics. Bronze-coated strands of steel wire, fashioned into two hoops, are implanted into the sidewall of the tires to form the bead, which assures an airtight fit with the rim of the wheel. The tread and sidewalls are put into position over the belt and body plies, and then all the parts are pressed firmly together. The end result is called a "green" or uncured tire.

The last step is to cure the tire. The "green" tire is placed inside a mold and inflated to press it against the mold, forming the tread and the tire identification information on the sidewall. Then it is heated at more than 300 degrees Fahrenheit for twelve to fifteen minutes, vulcanizing it to bond the components and to cure the rubber. (FACT: This twelve to fifteen minute curing process is for passenger and light truck tires only, off-road and large tires may take up at a day to cure because of their size!) Every tire is then inspected, and sample tires are randomly taken from the line and tested. Some are x-rayed, some are cut apart to look for flaws, others are run on test wheels, or road-tested to evaluate handling, mileage and traction performance. And that's how we roll!