Despite his youthful looks, Jeff Schlemmer, of Shakopee, Minn., has been "restoring" vintage contact point style car distributors for nearly 15 years. During that period, Jeff has become a "sparkplug" of British car enthusiasm, sharing his knowledge of distributors with hobbyists attending both local shows and important industry functions like the 2011 British Motor Trade Assoc. conference in Daytona Beach, Fla. Today his company, Advanced Distributors, rebuilds about 1,500 of these units per year for hobbyists and professional restoration shops across the country. The specialty of the house at Advanced Distributors is returning British-made Lucas distributors to better-than-new condition. However, Jeff has redone electrical distributors for everything from farm tractors to fork lifts.

Many modern mechanics have never seen a distributor with breaker points and are not really used to rebuilding modern breakerless distributors. Restorers who are handy at fixing old cars can sometimes find the NOS, NORS or used parts they need to rebuild a distributor themselves, but you can rest assured it will not look like or perform like an Advanced Distributor. 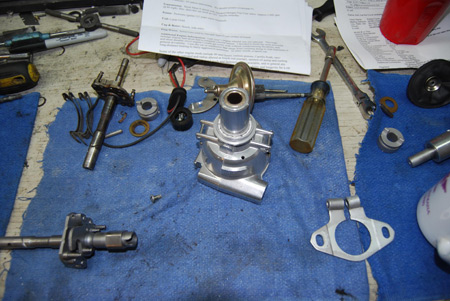 Each job begins with complete disassembly of the distributor and a work sheet from the customer listing pertinent information and any noted problems.

The reason for this is that Jeff Schlemmer does not use old parts or used parts for his rebuilds. He has had new parts made for Lucas distributors that are equal to—or often better than—the original parts. In addition, he is able to make hidden improvements and re-curve distributors to customize the performance of an engine with one of his rebuilt units. When you send Jeff your old distributor, a short time later it will come back looking like new and free of any slop in the mechanism. And depending on what you want, you'll have a car that runs smoother, goes faster or gets better fuel economy.

Jeff says his business evolved because he "got tired of doing the same old thing" with collector cars. In his youth, he had owned virtually every brand of vintage car on the market at one time or another, but it was the purchase of an MGB that gave him a focus .Since buying that car—which he still has—Jeff transferred his tuning and performance knowledge to specialize in British cars. 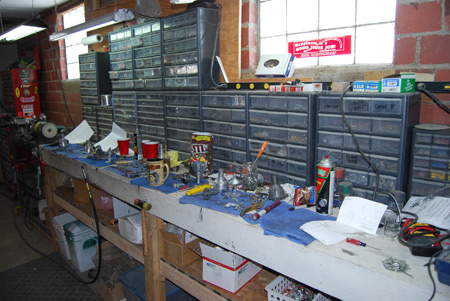 Jeff's shop is located in the basement of a barn at the farm he moved to recently and is filled with machines to make distributor parts, a sturdy work bench to do the rebuilds and plastic cabinets to store the many small parts in. 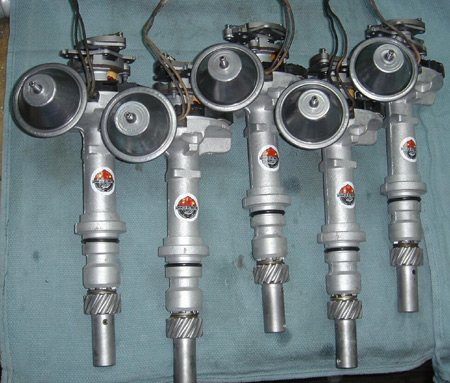 When Jeff is finished rebuilding the distributor, it looks like brand new and carries one of his Advanced Distributor stickers. He averages around 1,500 rebuilds per year (with no complaints) and hopes to hit 2,000 in 2011.

Jeff's fascination with the mechanical mysteries of the automotive distributor started 25 years ago, while he was taking an auto shop class in high school. He noticed a Sun distributor-testing machine covered in dust and stashed in the corner. "I wanted to know what it was and how it worked," Jeff recalls. "But, the shop teacher didn't know much about it, other than that it wasn't functional."

Within two weeks Jeff had fulfilled all requirements for the 12 week-long class and was getting a bit bored, so the shop teacher said he could "play" with the old-fashioned Sun distributor tester. He repaired the strobe and once he got it working, he figured out the machine's basic functions rather quickly. Then, he was able to re-curve a '67 Camaro distributor with the help of some old Hot Rod magazine articles. That was his first attempt at distributor tuning and it worked out so well that he's been tuning every car he's worked on ever since that time.

Recently, Jeff rebuilt a rare dual-point distributor for a 1960 Daimler SP250 sports car, that is one of only 2,500 ever made. This car has a 2.5-liter Hemi V-8 and is quite different than more popular British sports cars like MGs, Triumphs and Austin-Healeys. However, like Fords, Mercurys and Lincolns, British cars have a lot of commonality and use many of the same Lucas electrical components. The SP250 was a challenge, but nothing that Jeff couldn't handle. 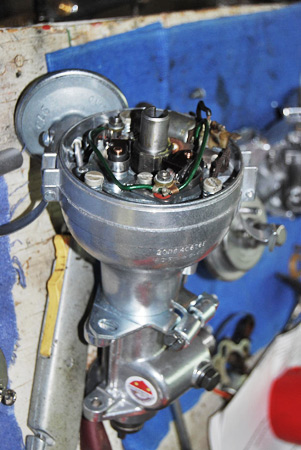 This is a rare British car distributor. The dual-point unit is used in the 1960 Daimler SP250 sports car to ignite its hot 2.5-liter Hemi V-8. 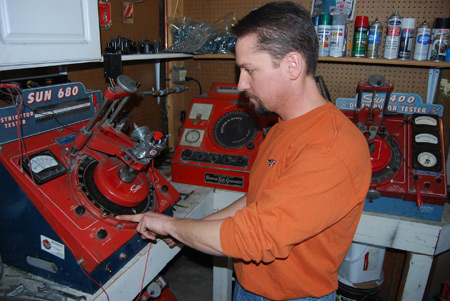 Jeff runs the SP250 distributor on test in his vintage Sun 680 distributor tester which can help him "dial in" desired performance or economy.

Typically, old Lucas distributors that have sat for many years may have problems such as a frozen advance assembly or ordinary wear in the advance mechanism. Restorers, whether "shade tree" style or professional, may also find that the distributor from a car in a scrap yard (say an Austin-Healey Sprite) was used in another car (say an MG TD). Often, these units will "look" correct and make the car go, but performance will be less than it could be and should be.

Jeff Schlemmer helps sort things like this out. He knows what works, what looks right and whether a distributor is the factory installed type or a service variation of the original. When you decide what you want, he can do a "standard" rebuild for as little as $109 for an MG, which is extremely reasonable, considering that one catalog gets over $100 for the parts alone. An upgraded rebuild for the same distributor may be as little as $10 extra.

Jeff pointed out that costs like these are "average" for distributor work and that he does Bosch and Delco distributors, as well as Lucas models. "What's normal for an MG won't necessarily jibe for a Superbird," he explained. "But whether the car is Healey or a Hudson, the distributor is completely disassembled, cleaned and glass-bead blasted and inspected for wear before we contact the car owner with a list of necessary and optional repairs."

Repairs include polishing the shaft and cam lobes. Any parts that may rust are sealed or lubricated. Endplay is reduced in the main shaft and cam assembly to closer-than-factory tolerances. The advance weight pivots are also repaired as needed and the weight stops are ground so that both weights seat at the same time (service mechanics often misplace pivots in initial assembly procedures, altering the amount of total advance.) The shafts are tested for run-out and straightened as needed. The ground wires and terminal block wires are replaced as needed. If the advance assembly in your distributor is held together with a clip, the shaft will be modified to retain the assembly with a steel screw for improved durability. This also allows adjustment of the end play which otherwise could be excessive. Besides, in many cases the clips are no longer available!

Jeff also re-curves every distributor to the original advance curve—or if the car owner prefers, to performance specifications—using his Sun 680 or Snap-On Distrib-U-Scope testers. While Jeff Schlemmer has developed a following among British car enthusiasts (he's often asked to put on tech sessions and do seminars at British car events and trade shows), he says that he can rebuild distributors for both foreign and domestic cars, as long as the parts are available.