An acquaintance of one of our staff asked us to help him purchase (well, he'll buy and we'll provide the technical assessment) a late-50s Rolls Royce or Bentley. He told us that he wants to drive himself and his wife in the stately old car to occasional trips to restaurants, outings and the theater. Their children are grown, educated and out of the house, so he and his wife want to pamper themselves a bit from now on.

All good reasons to buy a collector car, we advised, so we told him to let us know when he finds one he likes and we'll go over it thoroughly. Just a few days later he called and told us he found a "great buy," at only $18,000. Could we look at it right away? Sure we could, and here's what we found... 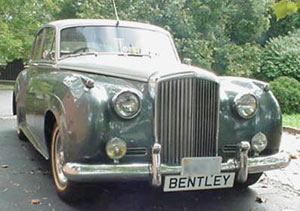 On first glance, the 1959 Bentley S1 Standard Saloon could be a likely candidate for a nice classic car restoration project.

The car is a 1959 Bentley S1 Standard Saloon 4-door sedan, right-hand-drive. While we aren't Rolls Royce experts, we did verify that this Bentley isn't one of the highly sought-after models like any of the Continental or Park Ward Coupes. 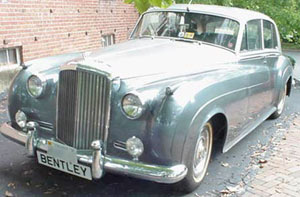 Another view of the Bentley.

All Bentleys of that year were powered by a 4.887 liter inline 6 cylinder engine, coupled to a GM-derived hydramatic transmission. The current owner states that the car is original, unrestored or painted, and has approximately 120,000 miles on it.

We walked around the car first, observing everything and making notes on a clipboard. At first glance the car looks reasonably sound (no obvious body twists or major damage) and sits level all around (no sagging suspension). 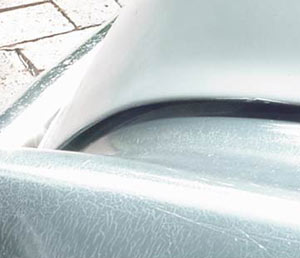 —Its two-tone silver paint is faded and "checked." That is, the surface shows minute cracks common to dried-out, shrunken lacquer paints of the past. The entire body will have to be stripped to bare metal. Looking closely it is evident that the car had been repainted sometime in the past.

—The trunk lid isn't perfectly matched to the body curves and won't open without hitting the bumper, which means the bumper is bent inward a little (probably from a mild hit or backing into a wall.) The bumper needs to be removed and repaired and the trunk lid re-shaped (at a cost of several hundred dollars).

—Most of the body panels exhibit a poor fit; that is, the gaps between them are inconsistent.

—All doors open and close easily, but the front passenger door drops about 1/2 inch when it swings out. Common causes here are worn-out hinges or rust-through on the support column, but we closely examined a bulge beneath the paint on the rocker panel below the "A" pillar. This revealed that the car was probably hit in that area, bending the bottom of the "A" pillar inward a small amount. Repairs were cosmetic only, so the plane of the door hinges is now tilted rather than vertical. Proper repair will be costly.

— The hood latches work adequately and both halves swing up as designed. The bumpers can be easily re-chromed and the few dents straightened. 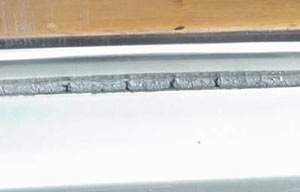 Rubber weatherstripping on passenger-side window is severely cracked and will need to be replaced.

— Chrome trim is slightly pitted, but nothing needs replacement. Estimates to re-chrome all trim on the car: $2,000-$3,000.
* Stainless trim can be buffed out.

—All glass is in good condition.

—All rubber weatherstripping on the car is shabby, rotted, cracked or otherwise unusable. Replacement is necessary and estimated cost is $2,000.

—Interior wood trim is in very good condition and can be cleaned and refinished.

—All instruments are in working order. 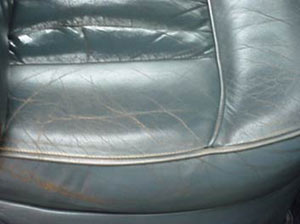 —Seats are in good condition and leather is not cracked or torn.

— Wool carpeting is marginal and moisture (from leaky weatherstrip) has caused it to smell musty.

Mechanically, here's what we noted:

—The engine starts easily and there is noticeable smoke. It shows light accumulation of grease and dirt common to engines with lots of miles on them, but is overall in sound condition.

— The cooling system functions normally, at least during our 8 mile drive.

— The brakes work quite well for such a heavy car.

—The transmission shifts smoothly but there is some slight slippage and fluid leakage.

—The differential casing weeps oil and is encrusted with greasy dirt. 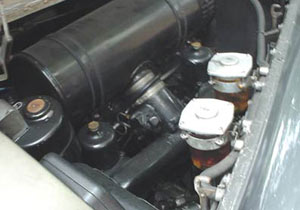 The car's engine runs smoothly and quietly. Power steering effort is very light. The automatic transmission shift quadrant operates smoothly, but is not like that of domestic cars. There is no "park" position, so holding the car in place is left solely to the parking brake which, fortunately, works quite well. Underway, the car glides smoothly and there is no evidence of vibration from the drivetrain. Suspension components were designed for a very soft ride that is far more so than modern cars. There is a slight steering "wander" that is due primarily to the type of tires on the car rather than wear of components. Braking is solid and straight, but such a heavy car requires a considerable stopping distance. 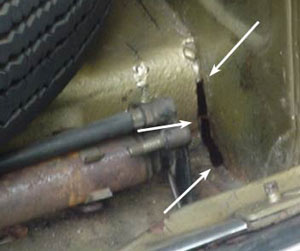 Floor inside trunk is rusted through.

We then looked for rust, the enemy of old cars. We found:
* The trunk floor is rotted clear through in several places.
* There is significant rust in the driver and passenger floor areas. 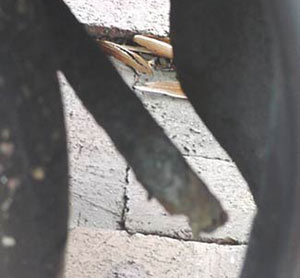 * The car has no fender liners, so there is significant rust on the underside of all four fenders, with some metal rusted away at the bottom rear of each. 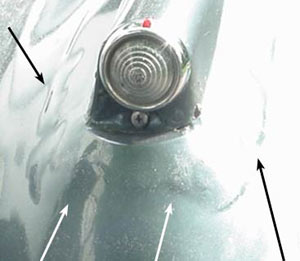 The paint here is hiding a lot of rust.

—The spear-shaped parking light bulges on top of the front fenders are severely rusted from beneath and will have to be replaced. Replacement pieces could be very expensive.

—There are a number of blistered areas on the body — at least a dozen — evidence of significant rust-through underneath.

—The frame overall looks solid but there is significant surface rust with some areas of deeper penetration. Gussets that support the fenders are either rusted through and severed, or missing entirely. 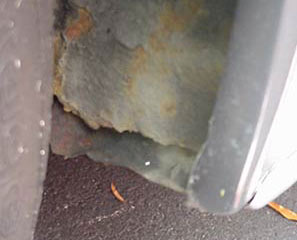 First, we consulted our Vehicle Condition and Relative Value Guide and agreed that the car is a "D" level vehicle. That is, it has significant rust but is capable of passing a general safety inspection without major repair. The extent of rust visible on the car would be classified as "Moderate", meaning that the overall amount of metal to be replaced is a relatively small fraction of the total body surface. However, metal replacement is extremely time-consuming and costly. In our estimation the costs involved in repairing, straightening and repainting the body will easily reach $15,000.

To come up with a reasonable value for the car we consulted the latest value guides for the current selling prices of a Bentley S1 of this type. We found that a "D" level car's value falls between a high of $14,900 and a low of $7,900. We told our buyer that he shouldn't pay more than $10,000.

Why that figure and not more? Well, the high value of $14,900 assumes there is no rust and the paint is presentable, but this car has a significant amount of the former and very poor appearance of the latter. Also, the car is a right-hand-drive vehicle for sale in a left-hand-drive country, thus limiting its overall appeal.

Asked for our overall judgment, we told him to pass up this "opportunity" and look at other cars for a while. For $18,000 he should be able to find a Bentley in better condition that needs less work to make it pretty and relatively trouble-free. This car will easily cost $15-$20,000 to bring it up to a nice appearance, barring major mechanical work. It's no bargain in any sense. Fully restored, show quality examples of this model can easily be found for $22,000 to $30,000.