Time to EnLighten Your Classic Car?

Imagine this scene: You are enjoying a cruise on a country road in caravan with your classic car club friends driving many different vintages of old cars. The beautiful line of cars approaches an intersection and the brake lights come on. Can't quite see those brake lights? Most of the cars built before 1960 have brake lights that are practically invisible; especially on a sunny day. If you prefer pre-war cars like I do, the situation is even worse. The pitiful glow from our tiny lenses could hardly alert an amorous firefly, let alone that multi-tasking yuppie in a Beemer barreling up behind you. 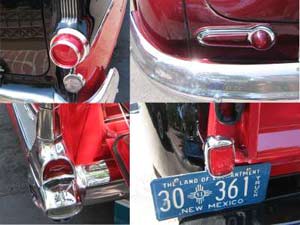 These taillights are lovely icons, but most are too small and weak to be seen in traffic.

Thanks to the light from the few modern cars that are usually in the line and the leisurely pace of our tours, there are rarely any accidents resulting from taillight deficiency. But the situation is worse when driving your old car alone in modern traffic, where you are surrounded by all that iron that emits more light than you have horsepower. It's hard to conceal your confusion in traffic when you can't send any discernable signal to those around you. Hand signals? Ha! Few understand them anymore. You are more likely to be arrested for soliciting than to successfully signal a turn by hand. No wonder car collectors have a reputation for being ditzy geezers on the road!

This quaint 40s something accessory turn signal is elegant but forget about using it to actually signal a turn.

This is not a new problem. For years there has been a cottage industry that produced and collected accessory lights of all sorts, including some cute ones that say "STOP", "SLO" or even waggle at you. These accessory lights are great collector's items, but their utility for real signaling in today's traffic is very limited.

Part of the problem is there has been a lighting race in the automotive industry over the last 15 years or so. Take a look at a modern taillight. What used to be a simple two filament bulb in a pot metal fixture has become a sophisticated engineered system. Many still use that familiar 1157 two filament bulb, but the similarity ends there. Engineers have created ultra shiny faceted reflectors and very efficient lenses to ensure that every ounce of light coming out of that bulb ends up in right in your face. Some higher end cars are starting to use LED (light emitting diodes) for taillights. These units are even brighter, especially in direct sunlight. And modern taillights have been moving up in the world, literally. Taillights in a modern car or sport utility vehicle are well off the ground, pretty close to eye level of most drivers. All this improved lighting efficiency around us has served to make our old car lights less visible in modern traffic. 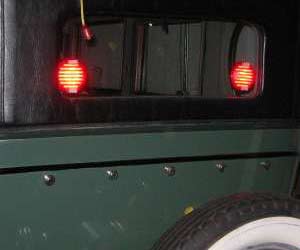 Two round LED lamps in the rear window of our '27 Buick. These lasers can let traffic know what you're up to.

I took an interest in LEDs as a possible way to get more visible accessory lighting in my old cars. My wife and I were planning a long cross country trip in our '27 Buick and I felt we needed to have decent signals to defend ourselves on the highway. I was impressed with the red LED lights that were showing up around town. Many communities have quietly replaced the red traffic lights with LEDs and some semi-trucks were using them. These commercial applications came about because of the very long life (100,000 hours), low power consumption and high visibility of LEDs.

I found that sealed red or amber LED taillights were available in standard sizes and shapes for commercial trailers. Many of these have two levels of lighting, i.e., they have a running lights and brake lights in the same unit, like a two filament bulb. These lamps have not trickled down to your neighborhood auto parts store just yet, but you can buy them from several sources on the Internet. Just Google "LED" or "LED Taillights" and you'll find sources. I started with two 4" round truck lenses to experiment with. These lamps were expensive, about $50 each. The price has already fallen a bit; I bought similar lights more recently for about $30. These units have no mounting brackets because they are designed to plug into a standard truck receptacle. After some experimentation, I used double stick adhesive pads to bond them to the inside corners of the rear window on the '27 Buick. These LED's are only available for 12 volt use, so I powered them with a small motorcycle battery. By adding a mechanical brake light switch, a standard aftermarket steering column turn signal switch, about 150 feet of extra wiring, and several thousand cuss words, I was able to get the LEDs to serve as high tech turn signals, brake lights, emergency flashers, and nighttime running lights on this 75 year old car.

It did not take much touring with these lights to notice the difference. For the first time, cars behind me actually responded to my signals. Lane changing was much easier. Using the emergency flashers on hills stopped folks from aggressively hanging on my bumper hoping to speed up my leisurely wide open throttle crawl.

I was impressed enough to equip all our old cars with similar lights. Our LaSalle already had factory 6V turn signals. For it, I used miniature 6V relays on the original wiring and two 6V dry cell lantern batteries in series to control and power LEDs mounted inside the rear window. The dry cells have kept our lights working brightly for over a year now. The rear window mounting keeps the lamps discretely out of sight when they aren't on, and puts the extra light high, more in line with modern vehicles. Make sure you aim the LEDs so they point towards the windshields of the cars behind you. LEDs are very bright but are more directed than conventional lamps. They lose a lot of oomph if they are pointing up or off to the side.

How do LEDs work? I haven't a clue, but I do know they don't use a filament, have very long life, produce hardly any heat, and emit far more light per unit of electrical power than incandescent bulbs. Edison would probably be impressed with this invention. I certainly am.

LED's are not the only aid for tired old car lights. Finding bad grounds in your wiring, cleaning up bulb sockets, polishing reflectors and lenses, or using halogen bulbs can make your existing signal lights more visible and effective. And more visible signals make driving old cars on modern roads just a bit easier and safer.