We left off last time with a successful "gear transplant," so it was time to move on to creating a crank handle. While we know that a reproduction handle can be had for $30, our project mandate was to spend as little as possible and to exercise some skills. There was plenty of steel bar stock laying around the workshop so we proceeded to brush up on our shaping, filing and welding talents.

We chose some 3/4 -inch round stock and cut off a piece for the handle's attaching yoke. This piece would be inserted in the meter side's access hole and then slip over the large gear shaft, so the first thing we did was drill the proper size hole in the center. Next, we cut the piece off to the correct length and drilled a small hole in (what would be) the inside end to pin to the gear shaft. There was no need to turn the outside diameter smaller. 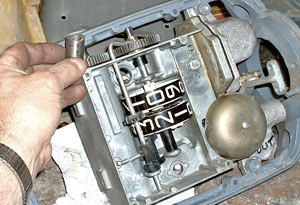 The yoke end is ready for the next step: welding.

Next, we copied a photo of a meter handle and enlarged subsequent copies of it until we had a "template" to work from. We ground a flat spot on the end of the steel rod and welded the yoke piece to it. 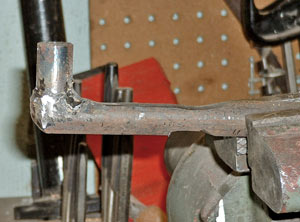 After welding the piece on our rod stock we ground the flat spot (facing down in the photo) and ground a slight flat taper on the surface.

Meanwhile, we cut a short piece from the other end of the rod to make the handle's 90-degree turning grip. This was chucked in to the lathe and we freehand-shaped a tapered waist and rounded tip. 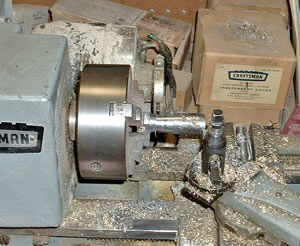 The taper is ready.

Upon removing the tapered handle from the lathe we positioned it on the flat spot of our rod. Once we were satisfied that it was correctly positioned we welded it all around. The grinder was then put into action and we slowly cut away excess metal to form a thin, tapered handle. 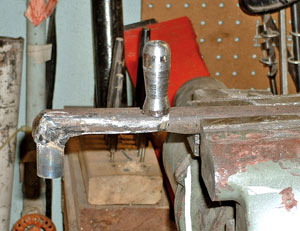 The pieces seem to fit nicely 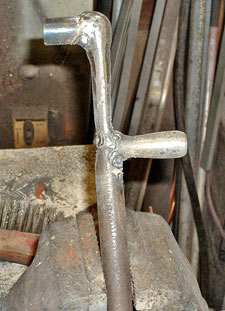 All welded up and ready for more grinding. 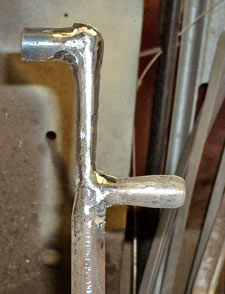 The grinder gave us a fairly neat overall shape and smoothed away all the welding bubbles.

With all the rough work completed we turned to our collection of files. These would be used to gently shape and form the final contours to the handle. We first cut the handle off the rod stock and clamped it in the vise. The shapes were formed first with round, curved, coarse files and smoothed off with fine files. This process took about an hour total. 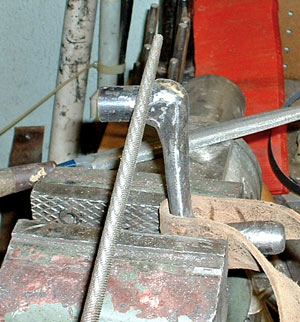 Once we were satisfied with the filed shape we sanded the entire piece with 220-grit paper. 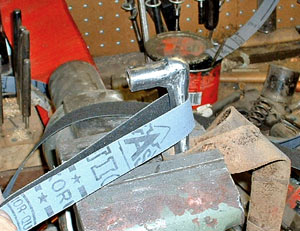 It is helpful to use thin strips of paper and to use it in a shoe-shine mode. 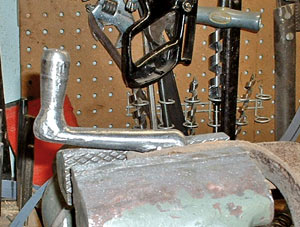 The handle is ready for polishing.

Finally, we were ready for the buffer. The handle took on a solid, finished tone that pleased us very much. However, we wouldn't want you to think that this exercise was cost-effective, at least in the sense of time. The whole task took about 2.5 hours from beginning to end. 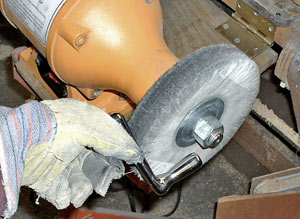 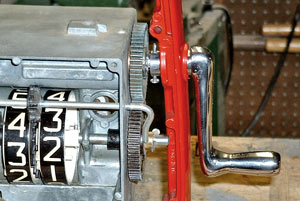 A test-fit on the meter housing shows a very nice looking handle. The nail pinning the handle to the gear shaft is temporary.

The set of trim pieces we had on hand was in pretty bad shape. Typical of such pot-metal castings, the chrome plating was badly blistered and scratched beyond salvation. Since our budget didn't allow replacement - and certainly not rechroming! - we decided to sand the chrome plating off so that we could polish the pot-metal to an acceptable shine. 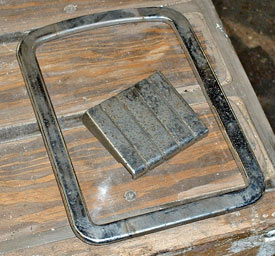 The process wasn't too difficult but it did consume a couple hours. We sanded each piece on the stationary sander (120-grit) to remove the chrome and get down to a reasonably smooth surface. Some pits were left in the metal because they were so deep that we were concerned about making the metal too thin, so these pits will give the finished pieces an "aged" look. 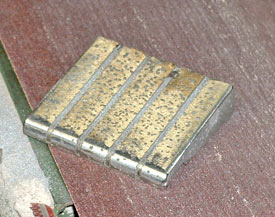 Sanding now reveals the copper plating under the chrome, so we continued on.

Following the initial sanding we switched to the pad sander and 220-grit paper to remove the deep scratches left by the coarse paper. This was followed by a 400-grit hand-sanding that made it easier to polish the surface to a smooth shine later. 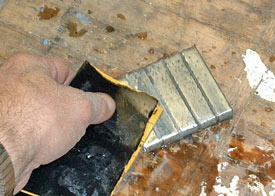 It's looking much smoother.

The buffer made short work of the task, yielding a chrome-like shine that we could be proud of. To keep the shine indefinitely we had the choice of either coating the pieces with clear enamel or waxing them, a decision we decided to put off until later. 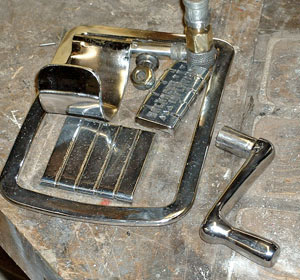 There's very little to tell here, since we've written lots of pieces on metal prep and painting. Suffice to say that we stripped the parts down to bare metal and primed/painted everything in a cherry red. Spray cans were the order of the day because the total surface area was too small to justify mixing, loading and cleaning the gun, not to mention the effort in cranking up the compressor, etc. Besides, the meter will be indoors so there was no reason to use automotive paint. 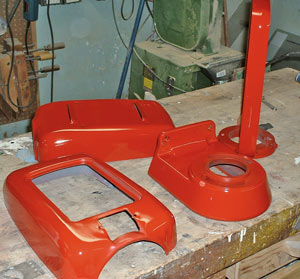 We've Got An Air Meter!

Assembly took about an hour and we took our time to get all the pieces fitted properly. After that we attached our wall mount to a piece of plywood that we had prepared with a couple 3/8ths bolts and then screwed to a stud under the drywall. 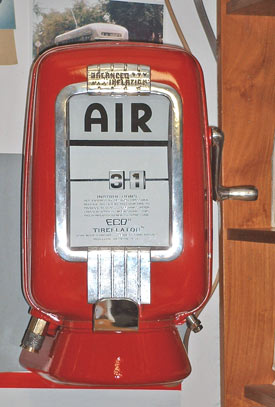 The total expenditure for the project was $48, just under our projected budget. The bulk of the money went to a reproduction face, glass front and number wheel replacement figures, along with about $6 for paint. We're happy with the result and will look around for a piece of air hose to hang on the front hook. Pretty cool, eh?