We recently obtained an old Eco Tireflator air meter, traded to us for other services by a friend who found it lying in the back of a gas station. 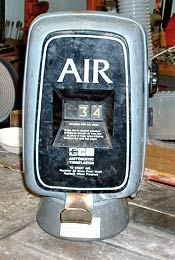 It looks pretty good and will make a fine addition to our automobilia collection.

The station manager was going to throw it out because it no longer worked, so he gave it to our friend.

This story astounded us because, over the past several years, the value of these air meters has escalated to what we'd say are unreasonable levels. A quick check on Ebay showed that meters in "marginal" condition are going for hundreds of dollars and restored ones are now at the $1500 level. The fact that it's still possible to find one lying around in a relatively modern, suburban gas station in the Washington DC area simply floored us. The fact that it was going to be thrown away is nothing short of crazy.

Anyway, now we own it now and couldn't be more pleased. The overall condition is pretty good and it's a later Model 97 meter with a plastic front face and the meter body is attached to its original wall mount bracket. While we don't profess to be experts on these devices, logic dictates that at the end of the "free air" era (now you have to pay for air in most places) the Eco folks were doing minimal re-engineering of their older meters. We believe that when existing meters were being serviced they would be fitted with the plastic face to replace pitted chrome trim and broken glass. 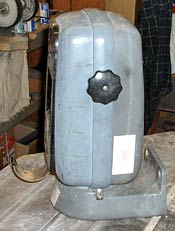 It has the later plastic wheel instead of the chrome crank handle.

We've decided to restore this meter for display, although a quick hookup to an air supply told us that it's working rather well internally — other than the fact that the crank wheel wouldn't turn. The meter is simply too valuable to install in the garage as an air pump, however so there's no reason to get it functioning and calibrated.

We've also decided to restore the meter on the cheap. That is, we're setting out to spend the least possible money to get a display meter that will light up (we need to put in a light bulb and socket) and be capable of turning the number wheels. Here are the plan's elements:

The goals in this project are to spend less than $50 and to utilize as many skills and techniques as possible to solve problems and accomplish the work. It will take considerably more time than simply replacing parts with reproduction pieces but, after all, we believe that much of the satisfaction involved in restoration is in the process itself. 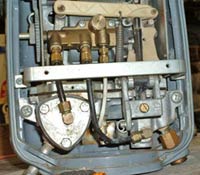 The innards are hardly even dusty.

First things first, and in this case that meant the removal of the wall-mount base and then the back cover. Once we could see inside we found that the condition of its parts was excellent. 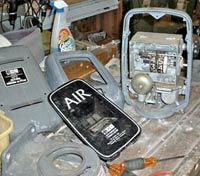 The front cover is off and the plastic face removed. 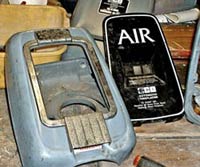 Those old trim pieces were meant to be used again.

Turning to the crank mechanism, we quickly found the reason the wheels wouldn't turn. The pot-metal gears were too soft to move the upper and lower shafts once they lost lubrication, so the teeth simply ground themselves off and the whole mechanism froze in place. 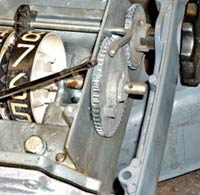 Look at those teeth!

We removed the workings from the meter's "backbone" and turned our attention to getting the gears off the two shafts. As it happens, the gears crumbled in our hands and we simply removed the pieces. The meter works by controlling a main air valve's flow. The crank is attached to the top shaft and by turning it a strong spring (attached to the air valve) alters tension to change pressure. The gear on the shaft mates to its mating gear on the number wheel shaft. Once the wheels were synchronized with the actual measured pressure the meter was calibrated. 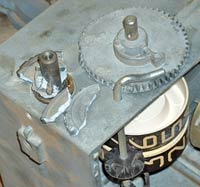 So much for the gears. The shafts were frozen in their bushings.

Now, What Do We Do About Those Gears?

Once the gears were off (well, disintegrated actually) we freed up the shafts, removed the number wheels and cleaned up the remaining components in the workings. There was no reason for further disassembly since the rest of the components were in excellent condition. We did remove the bleed valve and air output connector for ease of disassembly and polishing later. 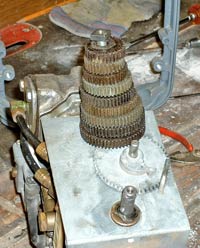 We researched the internet and found that new gears (used gears, actually, with the shafts) would cost about $70. That set us to examining alternatives such as making some crude gears out of plastic or aluminum, but we happened upon a set of thread-drive gears from an old Sears lathe we'd long ago given away. These hardened steel gears were lying around and, even though they might fit out existing lathe, of no practical use because we've never cut threads on any project in 40 years.

This jig couldn't be simpler to make and an "eyeball" alignment was all that was needed.

We carefully measured the center-to-center distance between the two shafts (2.25 inches) and then tapped two nails into a piece of wood at the same distance to create a fitting jig. We placed several gears over the nails until we found two that meshed together at the correct position. The holes in the gears measured 0.5 inches, much larger than either of the shafts' diameters. To mount the thinner (number wheels) shaft we chucked some brass rod into the lathe and made an adapter by drilling a center hole the same as the shaft diameter. We then turned the outer diameter to make a tight fit into the gear. Fifteen minutes later we had an adapter.

That was easier than we thought.

The larger shaft was only about 20 thousanths smaller than the hole in its new gear, much too small to make an adapter. Therefore, we placed the gear over the shaft and slid some shim material (okay, we cut some metal from a tomato can!) to make a tight fit and then welded the gear to the shaft. The results couldn't be better, as we now have a nice gear system that will never fail. 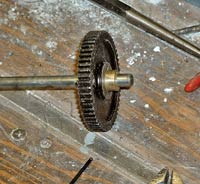 It fits the shaft perfectly.

Our over-engineered gear system works flawlessly and cost nothing.

Note: did you catch the flaw in the gear repair? Well, if you look at the "before" photo you will notice that the top shaft had a small gear and the bottom shaft a large one. The teeth-counts were engineered to turn the number wheels the correct amount of rotation to reflect the pressure as it was changed. Our new arrangement won't have the capability of synchronizing the number wheels to the pressure setting, but since the meter is for display only we're only interested in turning the crank to change the numbers. It would be quite easy to get a correct set of pot-metal gears later on if we ever want to make the meter function in a garage situation.