When we took on the Harley reassembly project we didn't really think it would involve restoring some of the parts. However, as with most "basket case" projects, the surprises keep coming every time you grab a part, in this case the carburetor. We left off at the end of our last article on this subject, so here's what we had to do...

The carb is a mess!

As you can see, this carburetor was a mess. It didn't even look like a carburetor, such was the dirt and caked-on varnish from years of gasoline leakage. The first step, of course, was to disassemble it. We sat it upside down and started unscrewing everything that would move, working our way to the inside.

That's the float bowl, by the way.

Once we ever-so-gently pried off the float bowl we could see inside. It was pretty horrible! Gas had long since dried up and water taken its place, so the interior components were caked in a thick calcium/mud deposit.

This is going to be a challenge.

Notice the pile of dirt on the newspaper.

Okay, now for the body, and the disassembly continued. We removed all the levers, butterfly plates and adjusting screws. As each piece was removed wereleased chunks of dirt and dried crud. Of course, we noted where each piece originally went and tried very hard to lay out each one in the order of disassembly. Once the carburetor was fully apart we could address each piece.

The components looked salvageable, so the decision was made to keep at it.

The bowl, as you know, was a mess so we had to clean it thoroughly. Using a small-diameter wire brush on a drill, we cleaned out all the mud and debris. Afterward, we mixed some Drano crystals in warm water and soaked the |mage6|bowl and its non-aluminum components to dissolve any stuff left in passages. After a good rinsing we dried off everything and further cleaned with a soft wire brush or the buffing wheel.

We basically did the same thing to the carburetor body. After it soaked in the cleaning solution we were a bit surprised to find out it was made of solid brass! The sodium hydroxide (Drano) solution dissolved all the nasty accumulation and left us with a nice, easy-to-polish casting. 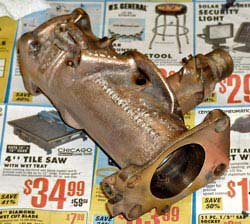 It's starting to look pretty good.

After spending a lot of time cleaning/polishing each piece we carefully reassembled the carburetor using new gaskets and springs and other parts from an NOS rebuilding kit. The entire process took a bit less than 3 hours but we were left with a like-new carburetor that would give us every chance of getting the engine running right.

We couldn't wait to mount it on the engine, so we took it out to the cycle and did so. The assembly took only a few minutes, but we then spent a lot of time looking around for the air cleaner. It turned out not to be there at all, so we'd have to order a reproduction piece. 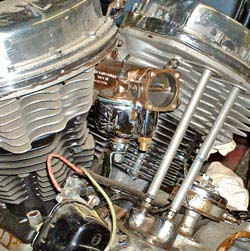 Back on the bike!!