If you have a 1956 thru 1967 Chevrolet V-8 you know what a messy job changing your oil can be due to the OEM canister-style oil filter. Zip Products has a conversion kit that permits you to use the considerably less expensive and infinitely more convenient spin-on AC PF-25 oil filter.

And, if you're a purist who's concerned about losing points at judged shows, the old canister/filter setup can be restored in less than a half hour, so you can have spin-on convenience for everyday cruising and a correct setup for judged events. Considering that a spin-on filter costs only about 1/3 the price of a canister filter, the conversion kit pays for itself after a few oil changes. The whole job takes well under an hour, and here's what's involved in doing the conversion. 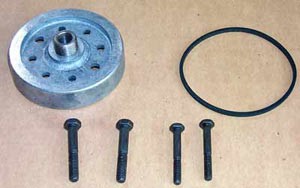 Here's what you get with the conversion kit from Zip Products: a spin-on adapter, a gasket, two 2x1/4" bolts and two 2x5/16" bolts. The two bolt sizes are provided to cover installations for all years, since the two sizes were used on both small-blocks and big blocks. My '67 big-block 427cid mill used the 1/4" bolts. 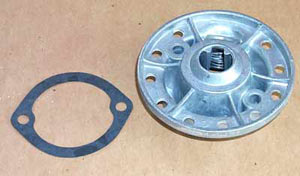 While I was at it, I decided to replace the by-pass valve assembly with a new unit, shown here, also from Zip. 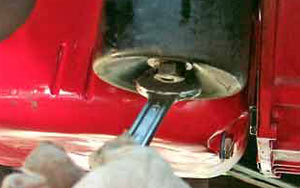 First, drain all the oil from the engine. Then use a 1/2" wrench to loosen and remove the canister retaining rod assembly and canister. Since the canister and filter will still contain about a quart of oil, this is a messy job. Wearing gloves and having a catch basin under the canister will minimize the mess. 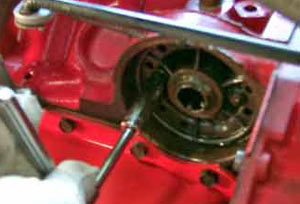 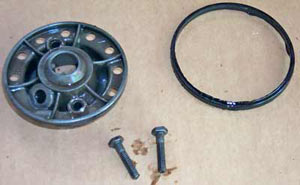 If you're going to reuse your original by-pass valve, clean it thoroughly with solvent. You can discard the old gasket and bolts, since they won't be used for the conversion. 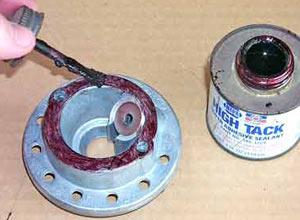 Coat the inner rim of the by-pass valve with gasket sealant and put the new flat gasket in place on the rim. 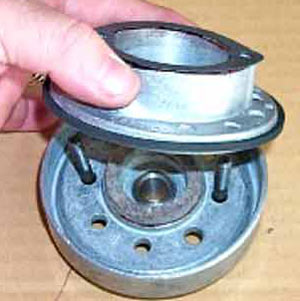 The new polyurethane gasket that comes with the kit is put on the rim of the by-pass valve next. Gasket sealant isn't necessary for this gasket, since it will be pressure-sealed when the mounting bolts are tightened. The by-pass valve can then be mated with the conversion adapter. 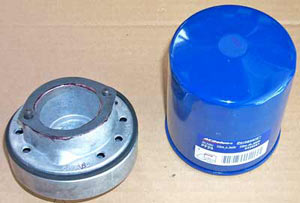 Here's the by-pass valve with the conversion adapter under it and two 2"x1/4" mounting bolts in place. The new PF-25 filter is ready to spin-on as soon as the assembly is bolted in place, which is the next step. 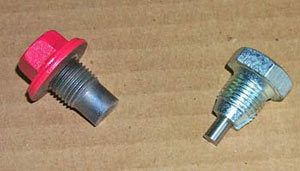 I also replaced the stock oil pan drain plug with a magnetic unit from Zip Products. For about $5.00, a magnetic drain plug is a great piece of added insurance against damage from minute metal particles that may be suspended in your oil. 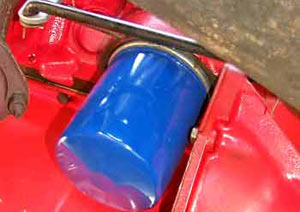 Here's the completed conversion that makes changing your oil filter faster and neater. Just fill up the crankcase with oil and you're ready to cruise - that's all there is to it.