It's time to clean up a few odds and ends before installing the new camshaft.

First, I still needed to install the front oil gallery plug on the passenger side of the motor. I wanted to provide better lubrication to the timing gears, chain and cam button so before installing it I drilled a small 1/32" diameter hole in the center of the plug. This will allow oil to spray onto the timing gear and keep things well lubricated behind the timing cover. 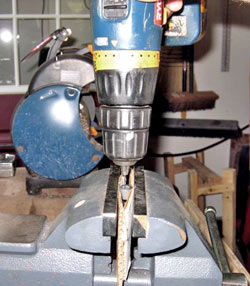 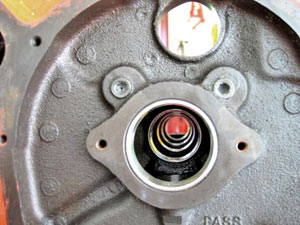 Next I installed the new oil pump pickup. When I purchased my new oil pan I also ordered the recommended pickup. After removing the old pickup I installed the new one and bolted it into place using a bit of Loctite on the bolt. Typically the pickup would be tack welded to the oil pump housing to prevent it from becoming loose and falling off. However, since the new pickup is securely bolted to the pump housing I didn't think welding it in place was necessary. 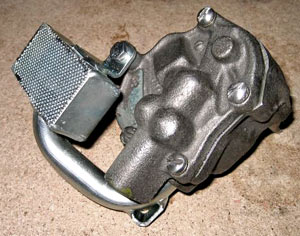 Hmmm.... Something's not quite right. The oil pump won't clear the new main studs (the motor originally used bolts which have smaller diameter heads). Both the pump and main studs are pretty critical parts so I'll have to do something to get both of them to fit. 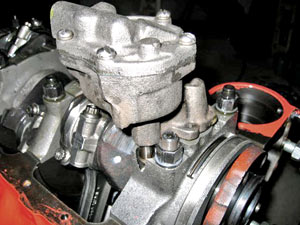 No worries, this sounds like a good job for the Dremel. After thoroughly taping off all the pump openings (I didn't want metal grindings getting into the pump) I did some careful grinding to provide the additional clearance necessary. 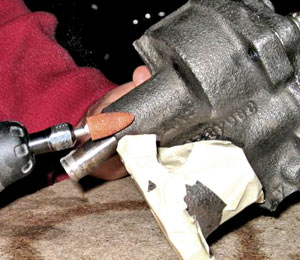 After a few minutes of grinding and a thorough cleaning I was able to reinstall the oil pump. I gave the oil pump bolt a coating of Loctite and then torqued it to 65 foot pounds. 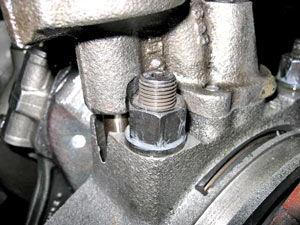 Here's the new Moroso oil pan I ordered. It's their kicked-out sump version which increases engine oil capacity from 5 quarts to 6 quarts. The increased sump capacity will reduce the chance of the the sump being pumped dry and will help keep engine temperatures down.

One nice feature of the Moroso pan is the baffle they install at the bottom of the sump. It prevents all the oil from rushing forward and prevents oil pump starvation under heavy braking. I would have liked to buy the version with the full windage tray, but the extra cost just wasn't in the budget. 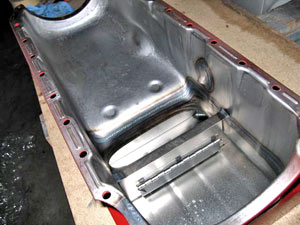 With the oil pump in place it was time to check the pickup to pan clearance. The problems associated with having a very small, or very large, clearance is obvious so the actual distance must be measured. To complete the check I taped off the bottom of the oil pump pickup and placed a 1/2" ball of putty on the pickup. I then installed the oil pan gasket and lowered the oil pan into position. 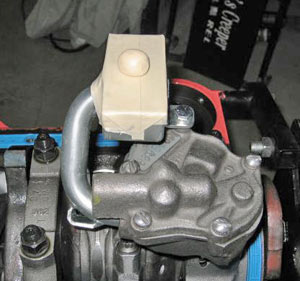 After removing the oil pan I measured the thickness of the putty. Moroso recommends between 3/16" and 3/8" of clearance. I ended up with about 1/4" so I didn't have to do any modifications, it sure is nice when things work out right on the first try! (although the clearance was checked at this point the oil pan was left off for now) 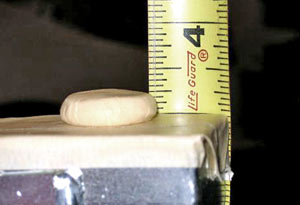 Last on the odds and ends list was installing the oil filter adapter along with a new gasket. Pretty simple... 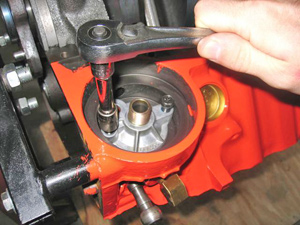 So here it is, the new camshaft! It arrived a few weeks ago and has been waiting around ever since. It looks like I'm finally at the point where I can install it.

The photo below illustrates the difference between the new hydraulic roller cam and the stock hydraulic flat tappet cam. With the cams side by side the difference in the shape of the lobes is fairly obvious. The stock flat tappet cam lobes are more of an egg shape whereas the roller cam lobes are more box shaped. The box shape causes the valves to open much more quickly and, as a result, they are fully open for a longer duration than with a flat tappet cam - and that means new horsepower! Of course the new roller cam also requires new roller lifters, but I'll get to those later on. 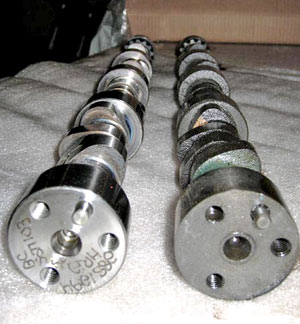 Prior to installing the cam I thoroughly cleaned it with mineral spirits, blew it dry with compressed air, gave each cam lobe a liberal coating of engine assembly grease and then coated each bearing journal with clean motor oil. 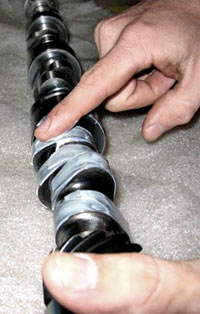 As you can see I bolted on the camshaft timing gear onto the cam to make handling it a bit easier. Installing the cam would have been simpler with a few extra hands, but it's possible to do it with one person provided you work very carefully. The trick is to move slowly and deliberately. You don't want to accidentally knick or damage any cam lobes or bearings. 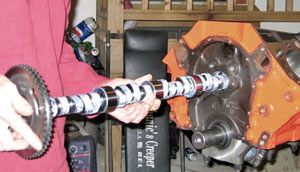 Here's the new timing set ready for installation. I opted for a double roller timing set from Comp Cams. 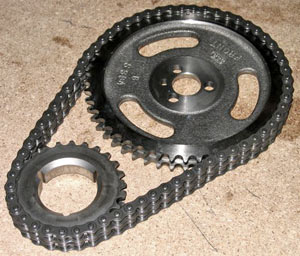 The lower timing gear is press-fit onto the crankshaft snout and can be a pain to install. Since I didn't have the special installation tool on hand I put the gear into a 350 degree oven for about fifteen minutes or so. When it was good and hot I took it from the oven and immediately installed it on the crankshaft snout. The heat expanded the gear enough so that it just slid into place, a little bit of oil on the snout helped the process as well. 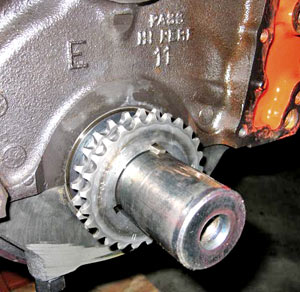 Because I'm going to a retro-roller cam setup I needed to install a cam button to prevent the cam from "walking" forward. Hydraulic flat tappet cams are profiled to prevent significant forward movement of the cam but this isn't the case with retro-roller setups. The cam button is placed in the center of the cam timing gear and presses against the timing cover to limit forward camshaft movement. 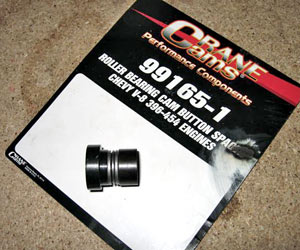 Here the cam button has been installed in the timing gear. The gear itself bottoms against the block to prevent backward movement, the cam pressing on the timing cover prevents forward movement. 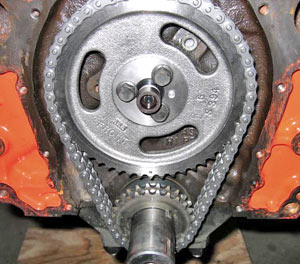 Because the timing cover is used to resist cam movement I wanted to use something more rigid than one of the flimsy stock timing covers. In the end I decided on a polished cast aluminum cover. It cost a bit more than a stock one but it'll work much better. Of course the cast aluminum cover is thicker than a standard cover so I'll need to machine down the cam button to achieve the proper camshaft endplay. 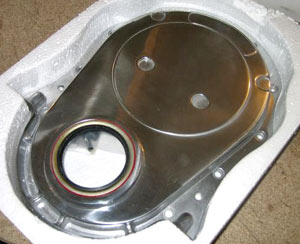 As I pointed out a few updates ago I had left the cam plug out for the time being. I had done so to allow access to the back of the camshaft to be able to check camshaft endplay. Even though I've installed a cam button the goal is not to achieve zero movement. Instead Comp Cams recommends between 0.005" and 0.008" of camshaft endplay. To measured endplay I used a dial indicator and set it up as shown below. With the dial indicator in place I gently pried between the block and the side of a cam lobe to move the cam forward and backward. It takes very little pressure to move the cam back and forth - if it doesn't move you're probably at zero endplay. It took quite a while to get the cam button machined to provide the proper endplay (removing just a little material at a time), but eventually I ended up at 0.006". I didn't want to go down to the minimum tolerance since I realize the timing cover gasket will likely compress over time and will reduce endplay by a bit more. 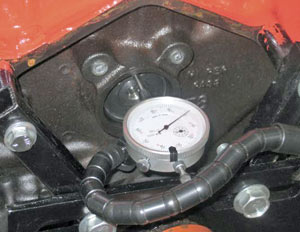 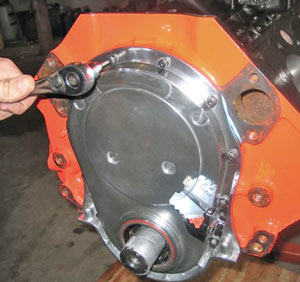 That's all for this update! Next time I'll be installing the cylinder heads, hydraulic rollers, rocker arms and determining pushrod length. Stay tuned!