It's a fact of life that all things mechanical will eventually wear out and fail.

Such is the case with the vent window regulator on my '67 Corvette car restoration project. The problem was that, due to wear, the vent window failed to close completely — if I continued to turn the crank handle when the vent window was almost completely closed, I heard a clicking sound that indicated a gear was either worn beyond hope or missing a tooth.

This is not an uncommon malady of mid-years, especially non-AC cars that are driven during the hot summer months, as mine is. An open vent window is a real blessing while cruising in the heat.

Depending on which part supplier you choose, purchasing a new regulator will cost you in the neighborhood of $150, and several of these parts houses require that you send them your original regulator or pay a core charge of up to $60.00. Obviously, this can be a costly proposition.

There is an alternative, however, and that is to rebuild your own regulator with a kit available from Zip Products. The rebuild kit (part # DR-542) sells for $95.00 and it only takes about 1-1.5 hours to install. Since you'd have to remove your door panel and regulator to replace it, why not rebuild your original unit and save some bucks?

The only tools required are a handle-clip removal tool, a basic socket set, a couple of Philips screwdrivers, a vise, a pair of pliers or vice-grips, a ball-peen hammer, an electric drill and, optionally, a #20 1/4" tap. Here's how to do the rebuild. 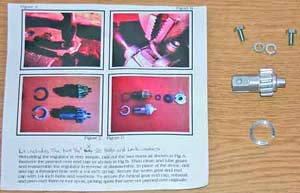 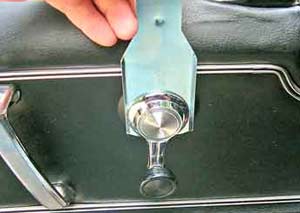 Removing the door panel is the first thing that needs to be done, so the window crank handles and the door lock knob are a good place to start the job. A handle-clip removal tool is required to remove these items. 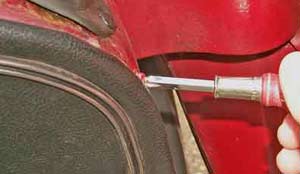 There are several Philips screws that must be removed next to free the panel from the door, and these include 2 that secure the door pull handle, 2 under the armrest, 1 on the upper portion of the panel near the latching mechanism, 3 on the underside of the door and 2 on the hinge side of the door. A stubby Philips screwdriver like this one makes accessing the screws by the hinges considerably easier. 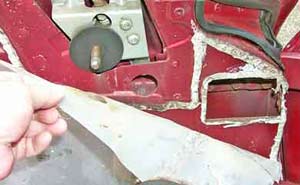 With all of the fastening screws removed, the door panel can be lifted upward while pulling it outward from the bottom. Once the panel is off, remove the plastic moisture barrier from the door by peeling it back. 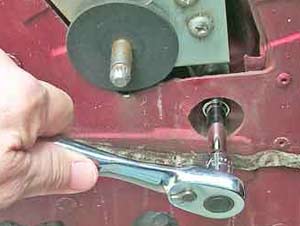 3 1/2" bolts with lock washers secure the regulator mounting bracket to the door, and these are moved next using a 1/2" socket. 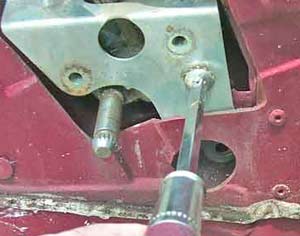 The 3 Philips screws and lock washers that secure the regulator to the mounting bracket are the next items for removal on the agenda. Once these three screws are out, the mounting bracket can be taken out of the door cavity. A 7/16" bolt with lock washer is used to secure the crank yoke of the regulator to the pivot shaft of the vent window, and this bolt is removed next. The regulator can then be pulled off the pivot shaft and taken over to the work bench when the rebuild operation will be performed. 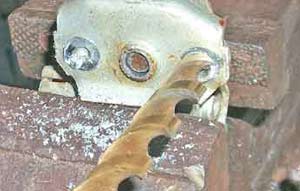 After securing the regulator assembly in a bench vise, the two rivets that hold the worm gear cover cap in place are drilled out. Remove the cap, the spring washer and the worm gear next. The end cap that secures the helical gear is held in place by peens at 3 spots around its circumference; use pliers or vice grips to gently bend the peens back so the end cap, spring washer, helical gear and spacer can all be removed from the regulator body.

The original components are shown on top with the replacement helical gear and "c" spacer washer below them. Note that the original gear only had teeth around half of its circumference, while the rebuild unit has teeth all the way around it; the replacement parts are also beefier. Aside from the helical gear and the "c" spacer washer, all of the other original components will be reused. 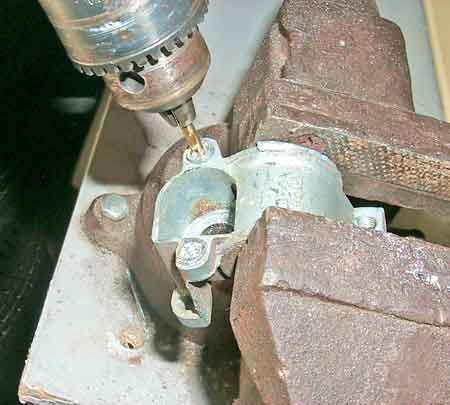 The rivets that formerly held the helical gear cover in place must be drilled out next. Even though the casting is soft pot metal, you'll find that titanium drill bits make the boring chores faster and easier.

Two 1/4"x20 bolts and lock washers are supplied with the kit and require that the drilled-out rivet holes be threaded with a #20 tap. However, I opted to drill 5/32" holes and use a couple of self-threading 3/16" sheet metal screws with the lock washers instead of the bolts. This variation on the theme saved me the extra chore of threading the holes with a tap. 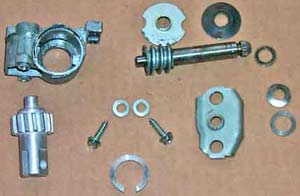 While everything is apart, it's a good idea to clean up the parts using a grease-cutting solvent. Here are all of the regulator components, ready for reassembly. 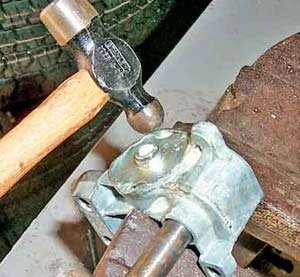 After inserting all of the requisite parts into the housing, a generous amount of 3M White Lithium Grease was sprayed inside to provide long-term lubrication. The helical gear end cap was then secured to the regulator housing by peening the housing edges. When doing this, avoid peening in the original locations to prevent the pot metal from cracking and breaking off. Only a few light taps are needed to secure the cap. 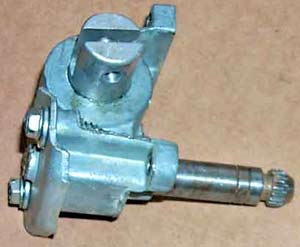 Here's the rebuilt regulator assembly ready for installation back in the door. Simply reverse the steps we performed for removal to complete the installation. You'll find that rotating the regulator shaft back and forth will make aligning the bracket and mounting holes a bit easier. That's all
there is to it.