Somebody Had To Do It 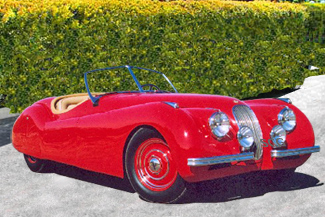 After the devastation of World War II came the difficult task of rebuilding most of Europe, including England. There, the automobile industry was faced with the dual effort of rebuilding broken-down war-production factories and tooling up to make cars. Material shortages were commonplace and skilled labor was hard to find.

Amidst all of this, founder and president of Jaguar Cars, William Lyons, spent his waking hours dreaming of a high-performance car. Lyons did not want just high performance, but the car and the engine must look powerful too. By early 1946 Lyons made the decision — a simple push-rod engine would be ignored in favor of a dual, overhead camshaft engine. Lyons wanted an engine which would power his present and future sedans and, without major re-tooling, also the prototype racing cars that were in his mind's eye.

The engine was designed and developed by Jaguar's engineering chief William Heynes. The engine was given a letter-designation of X. Each significant engineering change was designated by a second letter, starting with A. The final engine design, the XK, was the one on which the fate of Jaguar was decided. All forseeable Jaguar cars would be powered by the XK engine.

Heynes and Lyons didn't know it at the time, but they had struck the right chord with the decision on the XK. This engine would remain unchanged (except for displacement alterations) from its basic design from 1948 until 1988. The XK engine formed a large proportion of the entire Jaguar success story, because without it the cars produced by Jaguar would have been too tame to win races, rallies and the resultant sales worldwide. 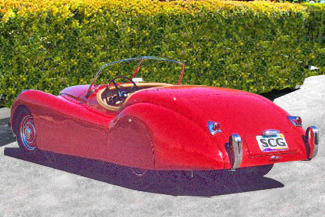 European motor racing was dominated by the Italians by the late 1940's and Lyons wanted a piece of it. He wanted to produce a sports car that was capable of winning races and, hopefully, which might actually be sold in limited production. To that end, his designers, led by Ernest Rankin, worked on a prototype two-seater based on the classic Bugattis and the 1940 Mille Miglia BMW, both favorites of Lyons.

The 1948 Earls Court Motor Show saw the world debut of the new Jaguar two seater, the XK120. A nervous William Lyons previewed the car at Grosvenor House on the Friday before the show opened and members of the world press went reeling. They couldn't get enough of the car. Not only did the new Jaguar make news, it stole the show from everyone else. A quote from the head of advertising for the show stated, "Looks as if Jaguar has the only ruddy car in the show!"

The XK 120 was an instant success, much more so than Lyons ever dreamed as it turned out. No one at Jaguar ever thought that more than a handful of the gorgeous cars would be sold and when orders started arriving from around the world the factory was turned into chaos. Within a year, XK 120 production soared. Eventually, 12,078 were produced, with 2,678 built as coupes.

Everyone Had To Have One

The XK 120 was named for its top speed. Lyons realized that the XK engine, now producing 160 horsepower, could propel the relatively light car reliably to [in excess of] 120 mph and it made sense to advertise that fact with the car's name. In fact, the XK 120 was advertised in print as the "world's fastest production car" from 1948 to 1954, an it was. With a little tweaking, XK 120's could easily hit 140 mph and soon they were being raced everywhere, driven by such unknowns as Phil Hill, Stirling Moss, Ritchie Ginther and others.

Hollywood fell in love with the car. Clark Gable, Humphrey Bogart, Marilyn Monroe and many lesser notables all bought them. Cary Grant was photographed with his own XK 120. The car simply looked three times as expensive as it was and its design managed to combine elegance with the look of speed. It was a sensation.

We can speak with some authority that the XK 120 does not drive nearly commensurate with its looks. The cars are fitted with a barely-synchronized gearbox (2nd, 3rd and 4th, that is) and the straight-cut gears make it sound like a milk truck. The steering is the heaviest we've ever experienced (including farm tractors!) and the old-technology four-ply tires make the car wander more like a squirrel than a vehicle. The drum brakes are huge — eleven inches — but very narrow and the self-adjusting design is ludicrous. The brakes must be perfectly adjusted or the cars will drift sideways in a heartbeat. Once underway the XK 120 drives about as well as most other cars of early-50's vintage, but in today's world of higher speeds and dense traffic, driving one is unnerving and demands total concentration.

On the other hand, the 120 gets more attention than virtually any other car, short of a Duesenberg or Bugatti. The car's timeless shape, the opulent/elegant interior and the understated Jaguar badge on the hood all combine to give the feeling of a distant, optimistic time when the roads were empty and the future bright.

Want To Own One?

A nice roadster will cost you well into the $30 thousands and well-restored ones command $40K +. Remember, the XK 120 doesn't drive anywhere near what you might consider "fun," but it's a personal choice. Coupes are less expensive, but a decent "driver" will still run you in the low $20 thousand range. The coupes are gorgeous, but we recommend you drive one before buying. You might find it a bit claustrophobic.