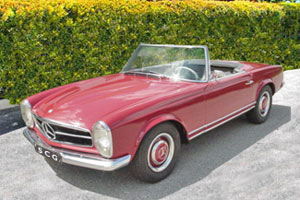 If you are going to be using.

During the 1950s, Mercedes Benz concentrated its engineering efforts on such things as braking, handling and body rigidity; things very much in vogue today. By 1952 the company had made the decision to return to racing in order to showcase its technical expertise. The factory teams won nearly every race they entered, and by mid-decade Mercedes was winning Grand Prix events in quick succession.

It naturally followed that a production version of its winning race platform should be offered and, of course, that model became the famous 300SL Gullwing. The car, built on a heavy twin-tube cruciform frame and powered by the now-potent 3.0 liter, in-line 6 cylinder engine, became an instant success. Well, at least it was a success in the context of desirability, since back in 1955 the price of $6,820 managed to scare off most enthusiasts. That would be about $130,000 today!

The folks at Mercedes knew all about the limited market for the 300SL and had already made plans for a smaller, less-expensive version eventually called the 190SL. This car would be a unit-body design with fully-independent suspension, wind-up windows, heater and radio. All of these features were new for the '50s, of course, when owning a sports car meant bone-jarring, drafty, toe-numbing, noisy driving in the best of situations.

The 190SL became a success in the upper-crust market and Mercedes was committed to offering its sports cars to the public from then on. It had its disadvantages, though. 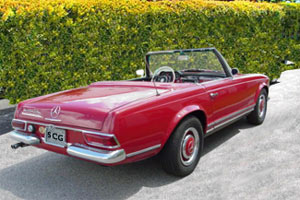 The 190SL was simply too '50s in styling and too underpowered to fit very well into the 1960's. Its little 1.8977 liter engine wasn't enough to go against new competitors like the XKE and Corvette, but the ride and handling were superior. Knowing this, and also knowing that the race track was the wrong place in which to direct its efforts, Mercedes decided to concentrate on the upscale, country club sports car market. What they needed was a newer, fresher body design and a little more power. Performance equal to the 300SL was out of the question.

What Mercedes did (in 1963) was to introduce the 230SL at the Geneva Auto Show. For the '60's, the new roadsters offered an elegant-cum-boxy design. The car was powered by a single overhead cam 2.3liter in-line 6 which developed 150 horsepower. Power still wasn't comparable with the competition but everything else about the car was. The 230SL was unquestionably the most comfortable sports car one could buy and its handling was equal to the best of the competition.

The SL's wheelbase was a relatively short 94.5 inches, but its stance was almost 8 inches wider than an XKE and nearly equal that of the Corvette. The result was a car that rode exceptionally well and had very predictable handling qualities.

The 230SL gave way to the 250SL (2.5 liter engine) and then eventually to the 280SL (2.8liters, more power, etc.) in 1968. The 280's body style, while retaining the original 230 shape, offered all the refinements that eventually won it recognition as one of the most beautiful sports cars ever produced. The 280 never achieved true sports car status from enthusiasts, but they more than made up for it in sales.

Doctors, lawyers, entertainers, corporate executives (many of these, women) lined up to buy the 280SL's. What they got for their money was a sports car with such refinements as power steering, air conditioning, FM radios and automatic transmissions. What they also got was a sports car without the inherent reliability problems from which such cars suffered.

Notwithstanding the 230's early wins in the Spa-Sofia-Liege Rally, the 280SL and its earlier SL siblings were seen less and less at rallies and became virtually nonexistent on the track. While the cars themselves had ample handling capabilities, the 2.8 engine didn't produce enough horsepower to propel the cars in the way necessary to win in competition. They did, however, become the dominant fixture at country clubs and theaters.

Mercedes manufactured over 48,000 230/250/280 SL's and corporate policy now says that any authorized dealer can get financing from Mercedes Benz for any car ever manufactured by that company. They've held their value all these years and will continue to do so, since they are definitely recognized as classic cars.