Raising The Body And Clearing The Frame

After stripping out all the parts it was time to get the body off the frame. We had removed all the body mounting bolts and double checked to be certain that there were no wires, emergency brake cables, etc. still connecting the body to the frame. Then we stopped to give considerable thought to the next step. Removing the body from the frame can be tricky with convertible cars and, if not done properly, can result in bending the body in half. Therefore, much thought has to be undertaken as to how to go about lifting the body, especially in the method of bracing the door openings. If unbraced bodies are lifted from the two ends they will bend up in the center (the only structure is the floor and rocker panels) and if lifted from the center, the body will bend down as the two ends exert leverage. Either situation results in an awful mess and time-consuming structural repairs.

The solution, after much thinking and testing, was to build a truss assembly that would keep the center portion of the body rigid. Using the trunk hinges as the "peak" of the truss (they are mounted on a very strong, multi-layered sheet metal central support) we cut and drilled/welded pieces of angle iron from the rear body mount point to the hinge top to the windshield post on each side. We then attached angle iron across the width of the car at the trunk hinge peak and additional bracing inside the passenger area. We tested our arrangement on each side by jacking a portion of the center rocker panel and measuring any changes in the door openings. With movements measured only in millimeters, we were confident to move to the next portion of the task. 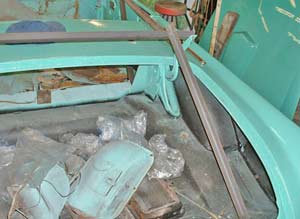 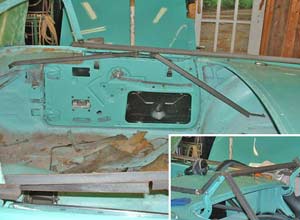 Our front-to-back bracing went from the windshield post to the trunk hinges (insert). We then added some additional interior bracing.

We decided to lift the body with two devices. In the front at the firewall we would use the engine crane attached to two chains, one on each side. In the rear we bolted a hefty piece of angle iron across the trunk floor and attached a come-along to its center. Doing so, we reasoned, would minimize the body's tendency to roll as it was being lifted. The come-along was mounted on an overhead truss, but we attached floor-to-truss 2x6 studs to transfer any load to the floor. 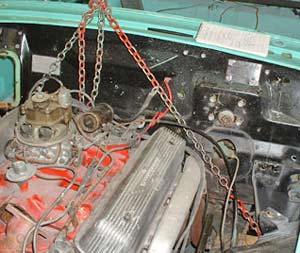 Chains from our engine crane are bolted to the body using the holes for the body mounts. 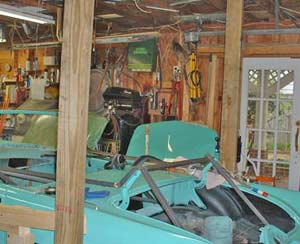 We clamped two 2x6s to the garage truss to transfer the weight to the floor. 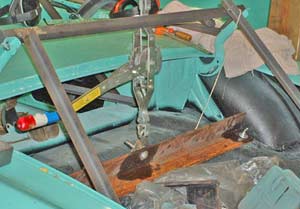 In the rear, we bolted in a large piece of angle iron which was bolted into the body mount hole. This is our anchor point for the come-along.

Our situation had another problem to overcome as well. We don't have enough room in the garage to place the body next to the frame. That meant we'd have to come up with a way to mount the body on a specially-made rolling cart that would be tall enough to roll over the chassis and wide enough so that the chassis could be rolled out from underneath.

After taking the necessary measurements (we wanted to build the cart just tall enough to clear the rolling chassis and low enough to get under the 84-inch garage door opening) we went out to buy some heavy-duty caster wheels. Once we had these we could build the cart's legs to our dimensions, less the height of the wheels. 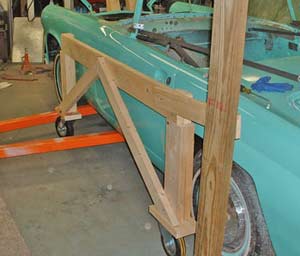 To make assembly easier while we had the body suspended, we attached the sides of the cart to our truss supports.

We built the cart components out of 2x6 lumber for sufficient strength and made sure we used enough bracing to prevent the legs from splaying out. The idea, by the way, was for the cart to be essentially a box-frame on top. We would then lay two double 2x6 linear beams on top to support the body's mounting points and provide extra length to support the ends of the body once it was up on the cart.

The cart was built and then disassembled and moved to the garage. We did this because it would be too difficult to roll the cart under the body — past the truss supports and over the engine crane's legs — with everything in place, so we'd just assemble it during the process. We placed the side pieces of the cart next to the body and screwed them temporarily to the truss supports to keep them upright. Now it was time to lift the body, so we each took an end and slowly cranked the machinery. The body started upward with little effort. Once it was high enough to get the rest of the cart's pieces underneath we left it dangling in air and screwed everything together. With the frame and braces ready, we inserted the linear beams in the proper position and let the body down onto them. 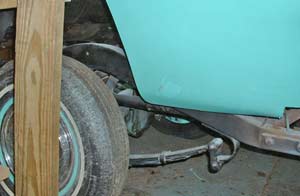 We slowly started to lift the body off the frame. 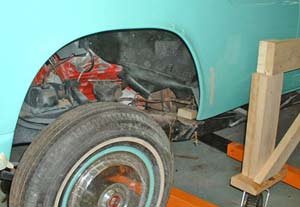 Still have a way to go to clear the cart. 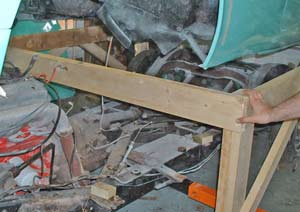 Once the body was the proper height, we positioned the cross pieces in place and screwed it together.

We then screwed right-angle wood braces to the beams to prevent twisting and then added miscellaneous supports to the front and rear of the car. Angle iron brackets sufficed for the front and pieces of 2x4 worked fine for the rear. 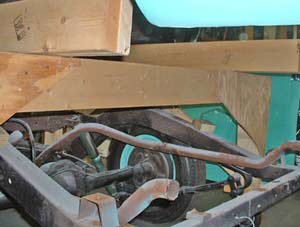 After we screwed in the crosspieces, we added some lateral bracing with plywood gussets. We then inserted the linear beams.

We then tested the cart's ability to move freely and were very pleased with the results. It took only one person's moderate pressure to move, thanks to the big rubber wheels. Rolling the body back revealed the engine and transmission on the chassis, making it relatively easy to get going on their removal. The transmission was filthy, by the way, but that's the subject of another article... 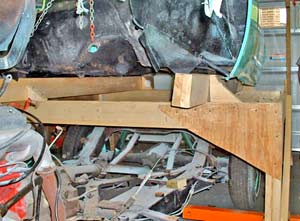 With the body resting on the linear beams, we added some right-angle braces to make sure everything stayed in place. 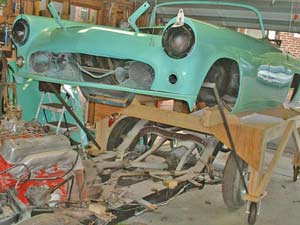 We used angle iron brackets to keep the front end from sagging. 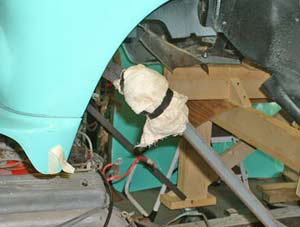 We padded the angle iron of the front supports. It was inevitable that we would bump into it and we always want to minimize any damage to ourselves. 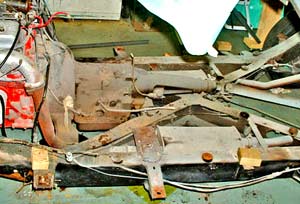 Looks like we got our work cut out for us.