Nash Metropolitan — Before Its Time 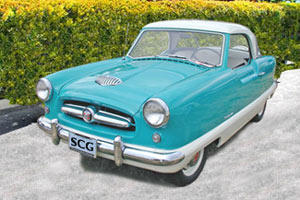 Well, we weren't, actually, but like the Crosley company, Nash Kelvinator Corp. built appliances and cars. It started when Charles Nash resigned the presidency of General Motors in 1916 and bought the Thomas Jeffery Motor Company. The new Nash company produced cars under its name until May 1st, 1954, when its joining with Hudson formed the American Motors Corp. During the Nash period, the Kelvinator company was purchased, under which major appliances were produced.

Two months before the formation of AMC in 1954, the Nash company announced its production of what had been an experimental two-seater, fuel-efficient car, the Metropolitan. Dubbed the NXI, for Nash Experimental International, the Metropolitan was the result of public surveys about basic transportation. It was believed at Nash that the new phenomenon of the suburb would necessitate the purchase of a second automobile by most families. Dad would use the family sedan for his commute to work and Mom would use the second car for errands. Naturally, the second car would have to be cheap and fuel-efficient to be affordable.

Nash engineers knew that if they were to build a tiny, 84-inch wheelbase utility car, the design of the drivetrain would be prohibitively expensive. The solution would have to be the purchase of a small-displacement engine. The place to get that kind of engine was Europe, either from Fiat or the British. The final choice was the Austin A-40 engine. This little 73 cubic-inch power plant made only 42 horsepower but was capable of 40 miles-per-gallon.

Nash President George Romney, who later gained fame in politics, dictated that the new Metropolitan would not be perceived as a "cheap" car. The car was produced in convertible form and standard equipment included a Weather-Eye heat and ventilation system, radio, turn signals and nylon & leather upholstery. All Metropolitans were equipped with 3-speed manual transmissions and one of the strangest column/dash shifters ever designed. Magazine ads of the day touted, "It's here! Nash presents a completely new kind of car - the Metropolitan!" 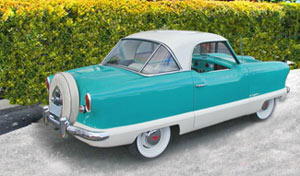 The Metropolitan was sold as either a Nash or Hudson, depending upon the dealership. The only production change was the insignia and marque name. This wasn't new, since after the start of AMC the Rambler used the same marketing strategy. In 1956 the 'Metro got more power. The little Austin engine was tweaked up to 52 horsepower and a restyled grille and two-tone separating chrome side strip was added.

Was It Ahead Of Its Time?

American Motors management really believed that the public wanted economy cars. The Big Three started to realize the fact in the late 50's also. Even though the public appetite for big, powerful, comfortable sedans was huge, there was a large enough market segment to justify smaller economy cars. The newly-introduced Falcon, Corvair and Valiant were extremely successful. So successful, in fact, that the Metropolitan's sales started plummeting. It was canceled in 1962, due to lack of sales.

So what killed the Metropolitan? Certainly the competition dealt the car its death blow, but there were other factors before that which contributed to the Metropolitan's demise. Some buyers thought of the car as "foreign" and were reluctant to purchase it, but that was never a significant problem for dealers.

More to the point, the construction of the Interstate Highway System in the mid-to-late 50's changed the way cars were driven. These large, long-distance roads allowed for higher speeds. This, in turn, made the public desire cars that felt safe and stable at such speeds. The little Metropolitans, at 65-70 mph, felt like they were internally hemorrhaging. They just didn't belong on super highways.

Metropolitans show up at many car shows and parades and still look as cute as when new. They are fun to drive on secondary roads and top-down driving, and they sell for very little. A very good example of one can be had these days for $5000 or less.