Before anyone tells us that replacement (plastic) top panels are available for Gilbarco 96 pumps, we already know. We also saw a metal one for sale ($40) on Ebay recently but  the work on our top panel had already been done. Oh, well. 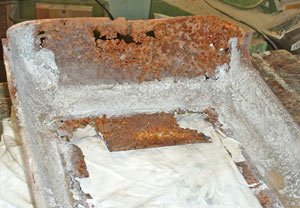 The underside of the panel showing the area to be cut away. White coating is residue from anti-rust treatment (Eastwood Oxysolv).

The point is, we wanted to show that almost anything can be restored, notwithstanding the effort required to do so. Therefore, we went to the trouble to make our existing top panel new again just to demonstrate some of the techniques involved. Granted, one end of the top had to be cut away due to rust-through, but overall the panel was reasonably sturdy. Of most importance is that the pump will spend its future indoors and not be subjected to any stresses or weathering. If this panel were on an automobile, of course, we would have been forced to replace all/or most of it.

We grabbed some sheet metal and proceeded to bend it to the general curvature of the top, prior to cutting away the rust. That curvature had been traced onto cardboard to act as a template for the process, so the task wasn't too hard to accomplish. Trial and error were the "secrets" to getting its base (the part that will be the bottom of the panel) shaped correctly. This is the critical measurement because the bottom edge just slips over the top of the vertical side panel. If we got the shape incorrect and later filled the voids with Bondo the finished "fit" would look bad.

Curving the new metal and aligning it to the template.

Next came the forming of the panel's top curvature. We started the process by hammering the [properly curved at the bottom] piece into shape, using a shot bag (a heavy-duty vinyl bag filled with lead shot and used to absorb hammer blows without damaging the outer surface of the metal) and ball peen hammer. This turned out to be pretty sloppy (read: beyond our skill level) but it was enough to allow us an opportunity to practice a little on Eastwood's Planishing Hammer. A little more noodling of the piece got us close enough to weld it in. 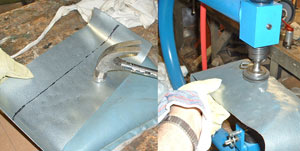 After cutting the cancer out of the panel we welded in the new section, being careful to align the bottom edge precisely.  Since there would be little mechanical stress on the panel it was not necessary to weld a continuous bead. "Spot" welds were acceptable for this purpose, that of providing a backing for a layer of body filler that could be shaped to the contour of the top.

We made a cardboard template of the shape of the top curvature using the other end of the panel as our reference. We used a contour gauge to get the shape close but a compass or pair of dividers could also be used. It would be just a matter of setting a distance between the points and running one against the surface while the other traces the shape onto paper. Once the template was accurate we simply spread filler on the panel surface (somewhat thick) and waited for it to cure. Once cured, we held the template over it to determine what needed to be sanded away or additionally built up. A few layers later, we had a very acceptable final shape. Unfortunately, we lost the photo of the final work before it was primed. Oh, well... 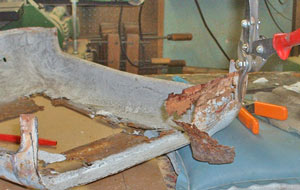 The offending metal is being cut out with snips.

Meanwhile, The Other Panels

Although there were a few rust-throughs in the three panels, none were bad enough to warrant major weld repairs. We ground away the rust in those areas and, in some cases, welded little backing patches on the inside to aid in supporting any fillers. There were about 10 coats of paint on the panels, due no doubt to the many years the pump stood outside at the gas station.

The paint was removed through a combination of sanding, grinding and chemical stripper, and then the metal surfaces were cleaned up. In some cases there was rust-pitting that had to be leveled out with filler. All finished surfaces were sanded and then primed with DuPont etching primer. 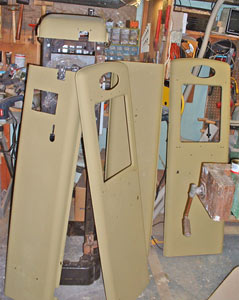 All the panels are primed and ready for test-assembly. Note how clean and nice the top panel looks.

It should be mentioned that we assembled the panels to the pump frame a number of times during this process. We needed to make sure everything fit together perfectly and that all attaching points, holes, brackets, etc., were lining up. Not doing so results inevitably in scratching up the finished, painted pieces while attempting to "make" them fit later. 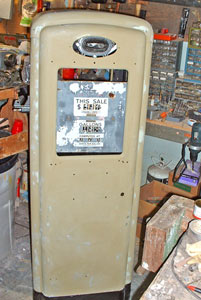 Everything fits great! The spots on the panels, by the way, are final touch-up filler repairs to correct imperfections after priming.

We chose a dark, "old-timey" red for the sides and top of the pump and a contrasting off-white (with hints of brown and yellow) for the front and back panels. One pint of each color was deemed sufficient for coverage. The inside surfaces of all the panels were first painted black, then readied for final finishing. 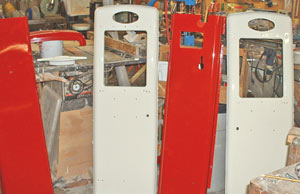 Since we were using two different colors we chose to paint the panels over a two-day period. The first day was devoted to the red-painted panels. After spraying them with three good coats we left them to air-dry overnight. On the following day we (gently, oh so gently) moved the red panels into the workshop and prepped the remaining two for the white coat. These were left to dry overnight as well, and then moved to the workshop for curing.

We were very excited about assembling the pump, but managed to force ourselves to wait several days before doing so. Freshly-painted panels can easily be scratched, scuffed or even imbedded with fingerprints, so we allowed them to cure slowly for at least four days. 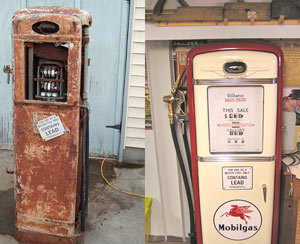 Just in case you've forgotten, the photo on the left is where we started. On the right, the finished pump in our office.

While the panels were curing we constructed several wood shelves in the pump frame. Since there never was any plan to replace the pumping machinery, all this space was available for use in storing stationery supplies.

Since we had try-fitted the panels many times before, assembly was a piece of cake. We took our time to make sure each piece snugged-up to the next, of course. The front and rear panels needed to have glass installed, as well as rubber edge molding. 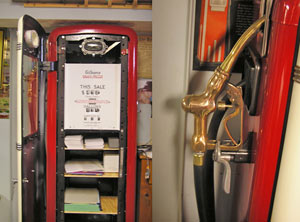 Always keeping an eye toward the practical, we use our restored pump as an office supply storage cabinet. The photo on the right shows the nozzle we picked up at a local antique shop and buffed back to its original sheen.

We had to buy new (repro) face panels for the gas meter. We also bought six stainless steel trim pieces that fit each door panel, plus a new gas hose for the nozzle. Since we were spending money we bought a couple "contains lead" and "Mobilgas" signs. We intend to replace the Mobilgas signs with "Calso" whenever we can make them up.

Overall, we spent about $350 on the project.

We're pretty proud of the freshly-restored pump. It makes a handsome addition to the Second Chance Garage office and gets lots of comments from visitors. Now all the neighbors want one...