How to Upholster Your Classic Car — Part 1

A friend of ours stopped by to talk and was admiring our '63 Falcon Sprint we were showing at a local car show. He asked us who did the interior. "We did, of course," was our answer..."We do 100% of the work on our cars."

After some additional conversation, our friend asked if we'd be interested in putting in a complete interior kit he had obtained into his 1967 Jaguar XKE roadster. The car, he explained, would shortly be coming out of the paint shop and the last thing left in the restoration was the interior and he felt he wasn't up to the task.

After considerable thought, we decided to do the job. Our thinking was that the entire project would make a great series of how-to articles for the Second Chance Garage website and other classic car owners out there might want to tackle an interior re-do but are a bit hesitant.

Well, hesitate no more, dear readers, because here we go!

If the car isn't stripped of its old interior, do it now. The only caveat here is to take out everything carefully enough that you can still use the pieces as templates or reference materials and, of course, take photos. 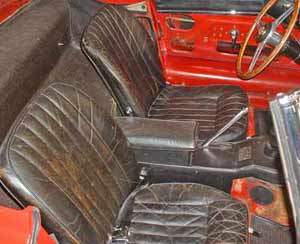 In the case of this Jag, all that was in the car when we got it were the seats and the dash (which was covered in black in all XKE's, no matter what the upholstery color.) The owner had purchased a new interior kit in "Bisquit," Jaguar's name for what we call "saddle or tan." 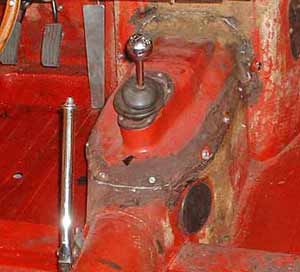 The bare interior of the car's body shows how sloppy production was.

We removed the seats and center console and took everything to the workbench for recovering. We laid out most of the interior kit's components to get a feel for where they go and in which order. The plan would be to reupholster the seats first, then fit everything else. 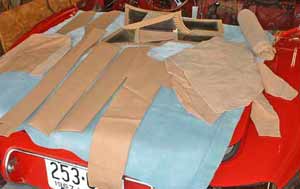 Most of the kit pieces are recognizable...many aren't!

These kits are fairly typical, in that they consist of pre-made seat covers, carpet, door panels, kick panels and vinyl or leather trim that is glued to the inner body parts. The worst thing about XKE's is the center console. It consists of seven separate components, each of which must be individually covered in material and between each must be placed a piece of welting. It's a 6-hour job, and more so if you make a mistake.

The center console "before."

We disassembled the console's components. Some are made of sheet metal, others in wood, and some are covered in vinyl and others in leather. We'll name the major pieces the cubby box, arm rest cover, handbrake piece, gear shift cowl and the main body. 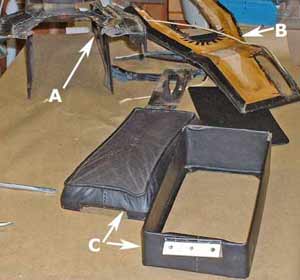 A: Console body; B: Underside of the handbrake piece; and C: cubby box and its lid (arm rest cover)."

We then took out all the appropriate trim pieces and laid them over the parts they cover. It's always important to do this, since many pieces might look correct but, in fact, fit over something else. 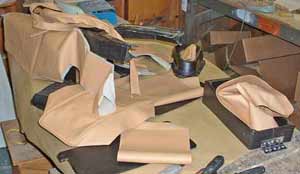 Progress! We have matched the kit pieces up with the components they are meant to cover...

Next, we had to create a new foam rubber filling for the arm rest cover of the cubby box. The old foam was collapsed, so we glued a new piece of 3-inch thick foam onto the wooden cover and ran it through the band saw (tip: if you don't have a band saw, use an electric carving knife) 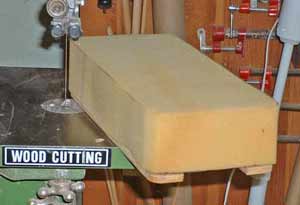 Cutting the foam to the correct shape was easy on our band saw. Take care not to cut the plywood base.

Since the new arm rest vinyl was pre-sewn, all we needed to do was stretch it over the foam core, wrap its edges under the wood bottom and staple the edges. Care was taken to keep the shape constant, rather than pulling too much to one side. 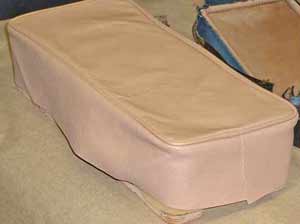 The armrest cover fits over the foam just fine...

There's a bottom panel that covers the exposed wood under the arm rest cover, and that had to be covered with new vinyl. The corners are rounded, so we first glued the vinyl to the flat surface, then made appropriate cuts in the material so that it would conform to the shape of the panel's corners. More glue was sprayed on the underside and the ends wrapped around. We also covered the 4-sided body of the cubby box with new vinyl. 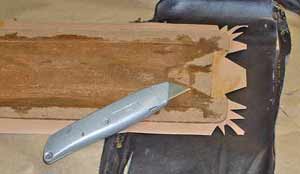 Making the cuts: Note that a significant amount of material is removed in order to allow the remainder to conform to the curves. Take care, that you don't remove too much. YOu don't want the cuts to be visible.

The handbrake panel is a two-level panel. Two horizontal surfaces are connected by a slanted surface. The whole thing is covered in leather and padded with a thin layer of foam. We first spray-glued the foam sheet to the surfaces, then trimmed it at the edges. Afterwards, we glued the leather to the foam, being careful not to get glue on the edges that would wrap around the edges. There were lots of cuts to make in order to get the leather to conform to the shapes, so we took our time. Once everything was wrapped and glued we taped the edges with masking tape to hold everything while the glue cured. 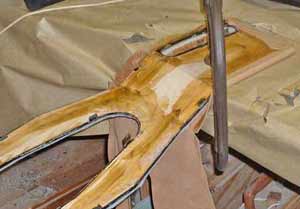 Notice that we are gluing the panel covering in discreet segments.

The tape makes it look a little nightmarish, but it's okay.

Now for the main body. This was relatively easy, since only the sides had to be covered with the edges wrapped over the top. These edges would be covered by the other panels, so neatness didn't count. We glued foam sheet on each side, trimmed to the edges, then glued the new vinyl onto the foam — making sure it was stretched to take out any creases. Proper cuts were made at the corners to allow the material to go around neatly. 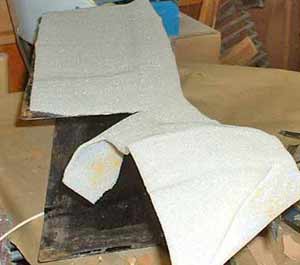 The foam is glued to one side of the main console body.

The vinyl is stretched and glued. Clamps help keep things from getting loose.

Gluing the top edge of vinyl so it can be wrapped over the lip of the body. It will be under the finished panels.

Next came the reinstallation of the panels, complete with the welting that forms a neat edge that accents the seam where they meet. We first clamped down the handbrake panel, making sure the welting maintained a nice sharp edge. This took several attempts, but when everything was ready we screwed everything together underneath.

The handbrake panel is clamped into place.

Next came the cubby box body, and we took the same care to get the welting properly positioned before screwing the components together. After the body was installed we were able to reattach the arm rest cover. 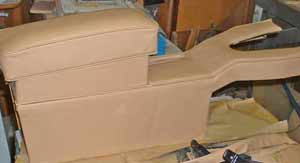 The cubby box and arm rest are neatly back in place.

The last piece to be covered was the gear shift cowl. This is a complex-curved affair and somewhat of a challenge to cover, so first we stretched the material over the front face and glued a small area. Clamps held it in place until the glue dried. 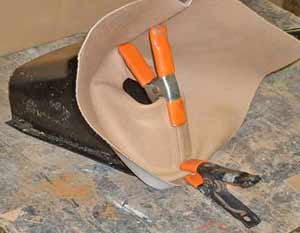 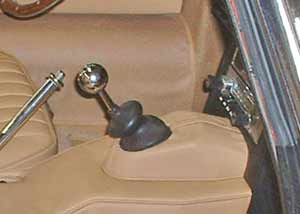 The gearshift cowl afer it was installed.

We've shown you how to cover seats before, but since no two are alike, in our next installment we'll take you through the "high points" of these Jaguar seats.