We are going to explain what parts make up an automatic transmission and the basics of how they work. These devices are so complex that it would require a specialized course of study to properly understand their design, maintenance and troubleshooting aspects. Therefore, this article will only show you what the components are, what they generally look like, and where they typically can be found. It is in no way a manual on how to take one apart and fix it, but at least you will get a feel for how they operate. Ready?

Automatic transmissions function through the torque converter, as described in the last article. Fundamental to the operation of an automatic also, however, is the planetary gear set. Planetary gear sets are compact, quiet and very strong. They can be used to step up the speed of the output shaft to reduce torque and to reduce output speed to increase torque. The gear set can even reverse torque. Here's how they work...

A planetary gear set is comprised of three or more gears called Planet Pinion Gears that revolve in orbital fashion around a central gear, called the Sun Gear. These gears are held in place by an outer ring on which mating teeth are cut into the inside face. It is referred to as the Internal Gear.

The Sun Gear is cut with helical teeth that are meshed with the pinion gears. In fact, there are two sun gears, the Primary and the Forward. The Primary sun gear is splined to the main shaft of the transmission and the Forward is free to turn independent of the shaft, but is meshed with the pinion gears. A long pinion gear connects the Primary and Forward sun gears. The sun gear assembly is designed to be held in place or to be turned by the transmission's central output shaft. The Internal Gear too is designed to be held in place or driven. Here's what happens in each case:

3) When any two members of the gear set are locked together the planetary action is stopped. The assembly will then revolve as a straight shaft, providing power transmission with no change of torque.

4) By holding the planet carrier and driving the sun gear, the pinions are forced to rotate about their pins. This causes them to drive the internal gear in a direction opposite that of their own. This is how automatics go into reverse. 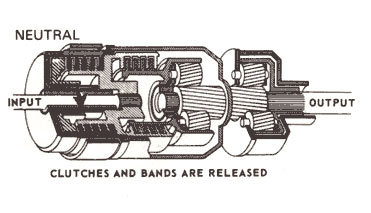 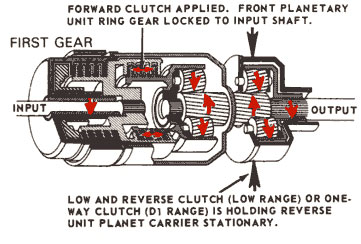 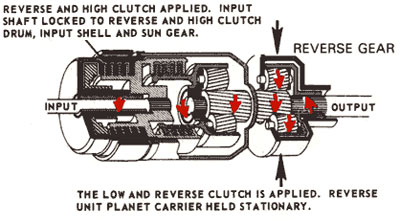 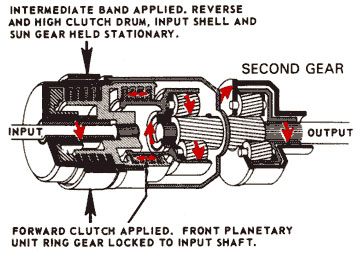 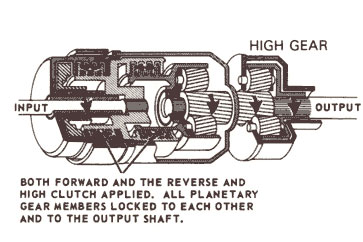 So How Does The Transmission Stop Movement Of A Specific Gear?

That's where the Bands come in. Everyone's heard of the bands, but most people don't know what they are. A band is nothing more than a steel band encircling a brake drum that is machined onto each of the planetary gear set components. Each component has its own actuating band. If any band is squeezed into a smaller diameter the friction created by the brake lining material would stop the gear's rotation. By selecting which bands tighten at specific times the transmission can select gear ratios.

Squeezing the band requires considerable force. This is accomplished through the use of a servo, which is a hydraulic piston that moves in a cylinder next to the band. An opening is provided at one end of the cylinder to admit oil. The piston is held in the released position by a spring pressing against the piston until oil (under pressure) is admitted. This oil forces the piston forward, squeezing the band.

There are many different designs for actuating bands. The one above is the simplest, but engineers have used many other hydraulic approaches over the years. The one thing that remains constant, however, is the use of oil. How it is pressurized and directed will be covered shortly.