When last we left the pump restoration the innards had been chucked and the rest of the framework disassembled and cleaned up. The cast iron base barely fit into the blast cabinet, so we stripped off the rust and paint of the ages and powder coated it a gloss black. This will contrast with the final red/white colors of the finished pump nicely. 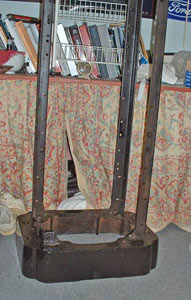 The base and frame is a little dusty, but it's all coated nicely.

The vertical angle iron frame members were only surface rusted and an overall wire brushing took care of readying them for paint. Before doing so, however, we cut off 10.5 inches of their length from the tops (the bottoms are specially formed to bolt to the base). We did this as the first step in shortening the entire pump by that amount so it will fit in its intended place in the office. After cutting we coated them, as well as miscellaneous hinges and brackets, with flat black rust-preventive spray paint. 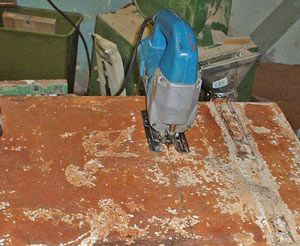 We trimmed 10.5 inches off the panels to "downsize" our pump so that it'd fit in the space we have for it.

We also sandblasted the inner top dome and the platform that holds the computer dials. The dome top was very badly rusted ("Swiss-cheese rusty!") but structurally sound. Since it only functions to hold the frames square and properly spaced and to provide something to provide attachment for the sheet metal pump top, we didn't worry about appearance. We painted both the dome and platform rust-preventive black also. 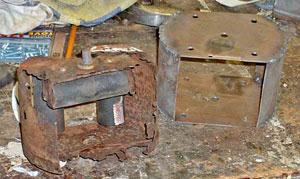 The hose reel guide roller box was definitely a basket case, so we created a new one.

Once the paint dried we reassembled the frames to the base and drilled the frames (they were sawed off, so now none of the original holes are in the right place) to attach the inner top dome. The same was done for the computer platform. Once these tasks were accomplished we could start to align and size the outer panels.

If you didn't notice it in the photos, one side panel was missing altogether. We checked out local metal shops in the hopes of having one bent to shape from new sheet steel, but even though it's only basically a "U" shape, each of the shops quoted nearly $300 to set up the fixtures and bend one piece. If we wanted several pieces or thought we could sell additional ones we'd have spent the money, but it wasn't in the cards. 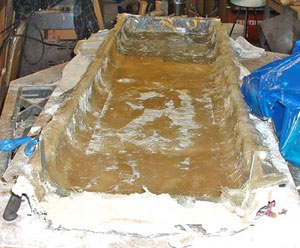 That led us to a decision: should we make one out of wood or create a mold and make a fiberglass panel? Here was our thinking on the matter: the time to make a wood panel would be less overall than molding fiberglass, but the finishing process (to match the metal panels) would take longer. So, off to the hardware store for some plaster of paris...

With a 25-pound bag of plaster in hand we addressed ourselves to making a mold of the existing side panel (identical except for specialized holes, slots, etc., that we temporarily taped over.) Placing the panel face down on some stiff cardboard, we sprayed it liberally with WD 40 to prevent the plaster sticking to it. Then we mixed the plaster and spread a layer about an inch thick over the entire panel and allowed it to pile up where the panel met the cardboard. While the plaster was wet we imbedded pieces of window screen to strengthen the final mold and help prevent cracking. The whole mess (literally) was left overnight to harden.

Next day, we flipped the mold over and pulled out the metal panel with little difficulty. There were a few air pockets and other imperfections in the plaster mold but these were quickly smoothed over with the application of new plaster. It was now time to make a fiberglass panel. 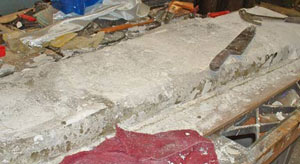 We told you it wasn't pretty. Remains of plaster mold stubbornly adhering to our glass panel.

Fiberglass is a mixture of plastic resin and glass fiber sheets. The thick liquid resin is mixed with a catalyst and spread into a mold, then sheets of glass fiber are imbedded into the resin after wetted down with some of the mixture. This is a smelly, sticky, messy process that requires wearing a respirator and rubber gloves, but otherwise fairly straightforward and easy to learn. In our case we did this process once, let it cure overnight and then laid a second layer in for strength and uniformity.

Notice what we did wrong yet? We didn't coat the raw plaster of paris with anything before laying in the resin. To be fair to ourselves (and help minimize blame for this brush with stupidity) we did rule out spraying the plaster with WD 40 because we felt the resin would slip down the vertical sides of the mold and pool at the bends. What we didn't do, of course, was to coat the plaster with anything else (like paste wax, for instance.)

The result was, well, A BLOODY MESS! The plaster stuck to the fiberglass really, really well. This meant we had to become sculpters, having to hand-chip the plaster from the fiberglass without damaging the glass itself. It took 2 hours of chipping to get to the last layer of plaster, at which time we took the mold outside for what was to be a very dusty sanding process.

One hour — and lots of sandpaper, wire brush and Scotchbright — later, we managed to produce a rather nice fiberglass panel that needed only a little bit of body filler to cover voids and scratches. The plaster dust created by this exercise coated the driveway, garage door and part of the neighbor's garden, by the way. 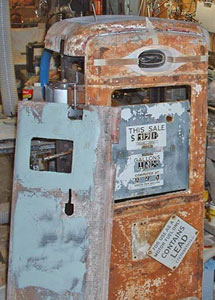 Here's our "re-created" panel after we added some body filler to smooth out the surface.

We got out a can of Great Stuff expanding foam and filled the interior of the new panel. There were three reasons for this exercise: first, we wanted to help stiffen the panel. Second, we wanted to take out the "hollow" sound that would otherwise result if the panel is tapped with knuckles or hard objects. Third, should we decide to put a light inside to illuminate the dials there will be no chance of seeing a translucent glow through the not-quite-opaque fiberglass.

Once That Little Episode Was Behind Us...

The panels had lots of dents and some rusted-through areas, especially the top. We welded scraps of metal behind some holes, re-worked some others with body hammers and created a new metal end for the badly rusted top panel. It was in the worst shape of all, but patience (and a lot of Bondo!) took care of the situation.

Note: We could get away with using this method of body filler here, since the pump will spend its life indoors. For an automobile in such condition we would have cut out all rusted metal and replaced with new, then laid a thin layer of filler over it.

The next chapter of this restoration will deal with the re-manufacturing of the top panel and repairs/preparation of the other 4 panels for priming and painting.