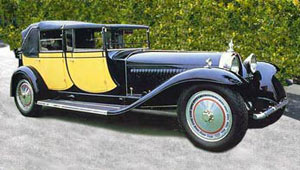 Born in Milan in 1881, Ettore Bugatti was fascinated by machinery at an early age. As a young man, he went to work for Baron De Dietrich in Alsace, to work on the Hermes-Simplex auto design. He was obsessed, however, with building his own automobile and by 1910 had acquired a small factory space in Molsheim. Before the year was out he had officially gone into the automobile business, producing the first of his cars, the Type 13.

Marriage, children and business occupied the next four years and, when World War I broke out, Bugatti moved his operations to Milan. During the war he designed airplane engines and it was in this endeavor that he was to develop his expertise at extracting large amounts of power out of relatively small displacement. It was also during this time that Bugatti decided that he would build the world's greatest car. At war's end he returned to his factory and started building Type 13's again, simultaneously starting work on a new eight-cylinder engine.

Racing, Luxury And The Depression

It wasn't very long before a Type 13 won the Grand Prix at Le Mans and the wealthy of Europe began lining up to order his cars. His new engine was ready and the Bugatti factory produced a quick succession of models, all of which were capable of moving their occupants in comfort as well as winning most any race. By the mid-1920's, Bugatti was comfortably engaged in the automobile business and again set his sights on building the "ultimate" car. The flamboyant, creative, egotistical Bugatti would build a car so fine in every way that it would never have to be replaced by its owner. The car would sport a radiator cap with a statue of a performing elephant, designed by his now-deceased brother, Rembrandt.

The car would be called the Royale. Its engine would be the most powerful one ever installed in an automobile. Bugatti' son, Jean, had convinced his father of the benefits of using overhead camshafts and multiple valves, so and the new car was equipped with this engineering improvement. The Royale, or Type 41, rolled out of the factory in 1932, in the deepest part of the Depression. Nonetheless, it was a masterpiece. The Royale's engine was beautiful as well as powerful. Weighing over 700 pounds and displacing nearly 13 liters, the engine produced 300 horsepower in an era when all cars (other than Duesenberg) had 100 hp or less.

The car itself was as magnificent as the engine. Overall length was 232 inches, wheelbase was 169 inches and the car's weight was 7,500 pounds! The cooling system held 15 gallons, the crankcase held 5 gallons and the brake drum diameters were 18 inches. Inside, the appointments were made of the finest materials available and the dash, while simple compared with today, was set in fine walnut.

And the styling? Well, what can be said that already hasn't before? Chances are very good that most 30's art-deco illustrations featuring a car show a fanciful Royale. The car itself almost looks like an artist's rendering, due to its impossibly-long wheelbase and fender curves that run 2/3rds the length of the body. The Royale looks so elegant that one gets the impression none were ever produced!

Due to the Depression, political unrest and an extremely limited market, only 6 Royale's were ever built. Bugatti's engine, however, went on to power boats and rail cars, ultimately finding extensive use in World War II. Bugatti himself continued to run the factory through his son Jean, until the young man was killed while road-testing a race car. That was in 1939, and within weeks Bugatti once more was producing aviation machinery for the war effort.

After WWII, Bugatti found himself embroiled in family and business troubles. His company limped along until the early 1950's, but his death in 1947 signalled the end of Automobiles Bugatti.

The six Royales still exist in various collections. The most famous of these is car # 6, the Berline de Voyage. It was originally bought by Briggs Cunningham and eventually found its way, in 1985, to Tom Monaghan (of Domino Pizza fame) for the reported sum of $8,100,000. It now is in the hands of a Korean investor.

Is the Royale the finest motorcar ever built? That's an impossible question to answer. Certainly for its time the Royale was one of the finest, but how do you measure such things? What the Royale is, though, is the stuff of automotive legend. Le Patron would probably be satisfied with that.