We love the look of old gas pumps. They evoke another era, remind us of our youth and, well, look really cool sitting in a recreation room or office. When one came to our attention we just couldn't pass it up. It was cheap (just a few dollars), close enough to pick it up (200 miles, actually) and from the time period we wanted (the late 1940s-early 50s.) 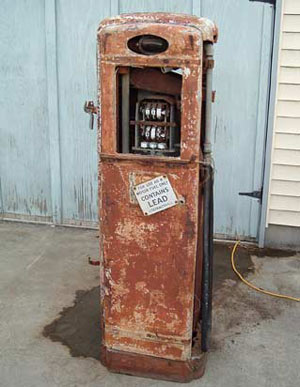 That's the good news. The bad news is that its condition is just on the "north" side of barely salvageable. One outside panel is missing, the back and top panels are nearly rusted away, one face is missing and the other faded to nothing, The meter section is not likely to ever spin again and the entire inside is one rusted hulk. There's no manufacturer's plate, so we have to research the manufacturer. It was formerly a Texaco pump but you wouldn't know it. It's also very, very heavy, weighing in at over 400 pounds. 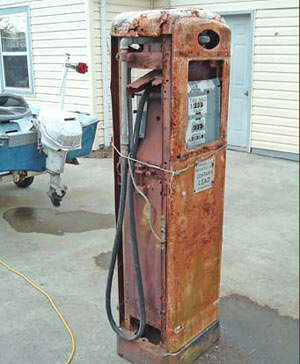 This side isn't removed for viewing...it's not there!

On the plus side the two "sight glasses" are perfectly intact, the retractable hose is in pretty good condition and the nozzle rest will fit an old brass hose nozzle that is currently mounted on the office wall. 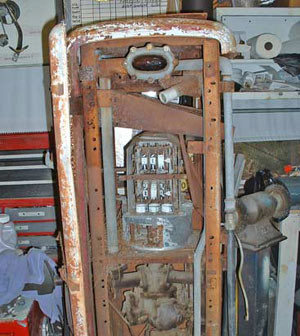 The dials are all there, as well as the sight glass at the top.

Thanks to a couple repro parts catalogs (Vic's 66 and Gas Pump Heaven) and the "Guide to Gas Pump Restoration" by Wayne and Benjamin, we've ascertained that the pump is a Gilbarco 96, introduced in the late 30s and manufactured well into the 50s. This is great, because the SCG staff actually remember using such pumps in our early days of car ownership (we saw them often in those days, as we never got more than about a dollar's worth at one time!)

After giving it some thought, we've decided to do a cosmetic restoration/alteration of the pump. That is, we're going to chop out everything that isn't seen through the glass openings, spruce up the frame, make the meter dials pretty and try to manufacturer some panels to replace all the rust. In addition, we'll probably shorten the pump by about a foot so that it fits [the only available space]in the office. We're going to configure it as a late-50s Chevron pump, just after they were changed over from the Calso brand (this nostalgic choice is in homage to Dr. Crankshaft's father, who managed the brand in the Mid Atlantic during that period. We'd do it in Calso configuration, but no decals are available in that brand anymore.) 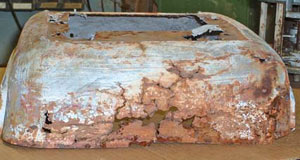 Ok, we know it's really, really rough, but what the heck!

We've started to strip the carcass, using everything from a grinder to an impact wrench to a Sawzall (with a metal-cutting blade) to a torch, in an effort to get components out. No fastener is removable with conventional methods, since time and rust have "welded" everything together.

We took the "computer" apart. Back in those days the "clock," as it was called, kept track of the amount of fuel being dispensed and the total price. It had to be reset each time a car pulled in as well as maintain accurate measurements. No real computers existed back then, so the entire device consisted of about 20 pounds of gears, wheels, springs and drive shafts and was powered by the pump's electric motor and synchronized with the flow of gas. 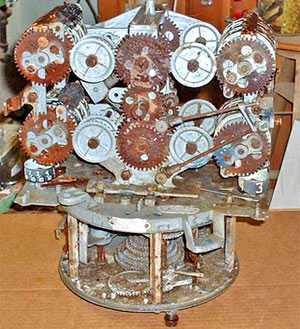 Is this thing cool, or what?

We found the entire mechanism to be a marvelous array of doodads, but rusted badly enough that we couldn't get it operational. Since we don't plan to invest serious money in the parts to rebuild or replace it, we stripped out all the heavy stuff, cleaned it up and set the indicator wheels at an early 60s "typical" fillup. It now shows a bit over 13 gallons at 31.6 cents per gallon, for a total sale of $4.32.

Two weeks have passed. The whole shebang has been taken apart and about 250 pounds of machinery tossed into the dumpster. We've received several gas pump restoration catalogs and will start the cleanup/prep/paint on each piece.