Several months ago we recounted the extensive troubleshooting we performed on our friend Jim's Mustang 6-cylinder engine. After testing and replacing a number of parts that had long been neglected the car still ran poorly. Vacuum tests showed leakage on the # 5 cylinder, however.

Jim drove the car for a while but eventually came back, asking us to give an opinion as to what should be done. "Rebuild the cylinder head," was our answer, and Jim approved. With that we sought machine shops to get estimates on the work. As it turned out there is a shop we found on the internet that specializes in Ford sixes. Their price for a complete overhaul, $185, was very fair even considering the costs of shipping. Jim elected to have the shop rebuild his head rather than do an exchange, so we needed to remove it for shipping.

We'll take you through the next steps to show what we did and how we did it. Of course, we wanted to remove the cylinder head, but there are easy and hard ways to do it. It pays to prepare, and we did so by draining the coolant. Next, we had to get the engine to Top Dead Center (TDC). Why, you ask? To make it easy to adjust the valves and get the timing correct at reassembly, of course. With the carburetor removed and hoses and wiring out of the way, we were ready to start taking off hardware. With the manifold disconnected from the rest of the exhaust system we could turn our attention to the head bolts. There were lots of them and, since such bolts are torqued tightly, it made sense to use our electric impact wrench to save some muscle pain. 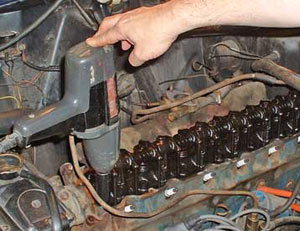 Headbolts are easy to remove with electric impact wrench.

This Ford six has a cast-in-head intake manifold, so there was nothing to remove in that case. The exhaust manifold was bolted on, of course, but the angle of the lower bolts made them hard to reach. Therefore, removing the two exhaust flange nuts and dropping the exhaust down-pipe made the most sense. We could then remove the head and exhaust manifold as a unit and take off the manifold bolts when they could be reached easily on the bench. The head bolts came out easily and we gently pried the head off, then placed it on the garage floor for removal of the exhaust manifold, temperature sensor, vacuum hose and thermostat housing — all pieces that could get lost by the machine shop if we left them on. Looking at the combustion chambers it was obvious that the #5 valves were burnt to a crisp. 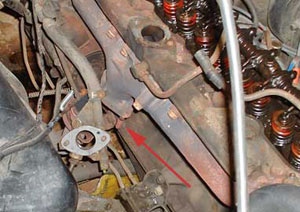 The bolts on the underside of the manifold are hard to reach, so we disconnected the two exhaust flange nuts (red arrow) and dropped the exhaust down-pipe enough to clear the manifold.

Before boxing up the head for shipment we took a careful look at the cylinder walls and valve lifter galleries, not to mention the #5 piston. All cylinder walls were smooth and free of scratches and cracks. After cleaning the carbon off the #5 piston we found its top to be sound and unburned. That was good, since a hole in the piston was a potential fear. The valve lifter galleries were a little sludgy, but otherwise looked in good shape. 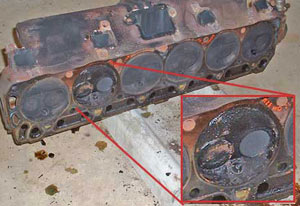 It's easy to see which cylinder was causing the problem. Inset shows obviously burned valves.

It took three months to get the head back! It turned out that the small-valve head on the car was no longer widely available, so the machine shop had to find a big-valve head that had the right throat size for the carburetor. Since the weather was getting cold and there was no rush to get the engine back together we simply waited until the shop found the right head. 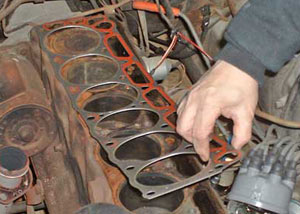 Laying down the head gasket.

Before installing the head we attached the exhaust manifold. This could be done after the fact, but access to all the bolts was far easier with the head off the car. After making sure the mating surfaces were clean and grease-free, we positioned the new cylinder head over the gasket and made sure it was centered. Then each head bolt was hand-started and snugged up. We torqued the head down in three stages until the proper specification was reached. 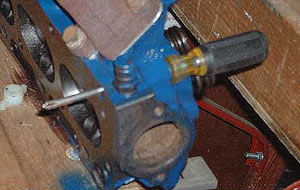 Our phillips-head screwdriver helped us to make sure that everything aligned perfectly. 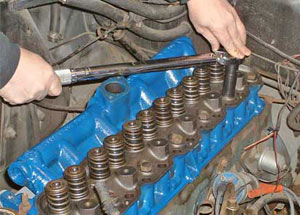 Following that task we inserted the pushrods and then carefully placed the rocker arm shaft over the head. This particular engine didn't come with adjustable valve clearances, so all we could do was torque down the rocker arm shaft. A few quick measurements of valve clearances told us that we could continue to put everything together. We installed the new, aftermarket, chrome valve cover, carburetor, hoses, etc. and tightened everything down. 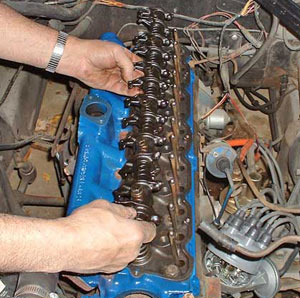 Before refilling the cooling system we decided to start the car and see if it ran reasonably well (you can do this as long as you don't run the engine for more than a minute or two.) The car started right up, although it ran very sluggishly and vacuum was at 12 inches.

Why, you might ask, would this be when we left the car in perfect tune before taking off the old head? Well, bear in mind that the old head's valve train was different from the new one. That means the valve timing (overlap) is different, so we'll have to re-tweak the timing. Also, the intake valves on the new head are larger, requiring readjustment of the carburetion. 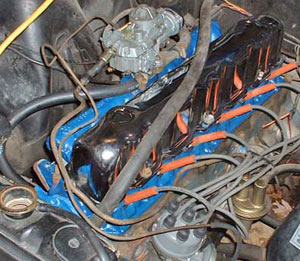 We re-checked the ignition's dwell and then readjusted the timing to correspond to that of later engines with big-valve heads. Then we refilled the cooling system and started the engine, allowing it to warm up to operating specs. An adjustment of the idle mixture on the carburetor brought the engine to a nice, smooth-running idle. A re-check of all belts, hoses and vacuum lines and a test drive was all that was left to do before we called the project a success.