How to Rebuild a Water Pump

Okay, we are fully aware that you can buy a new or rebuilt water pump (for around $40) that fits your Mustang, Camaro, Impala, Galaxie or other popular car from the 1950s through the 1970s. On the other hand, if you happen to own a less common car you might find that such a relatively simple component costs a lot of money.

That's just what happened when a friend of ours needed to buy a water pump to fit his 1960 Maserati 3500 GT. Only 2000 of these cars were made in their 7 years of production, so the price, he was told, would be $600, plus his old pump to be used as a core. No new pumps are available, so the "cheap" price was for a rebuilt one. Wow! To put this in perspective, that means our friend would have to earn approximately $900 to net the necessary money to pay for a rebuilt pump. There had to be a better way, he thought, so he brought the pump to the Second Chance Garage for a consultation. 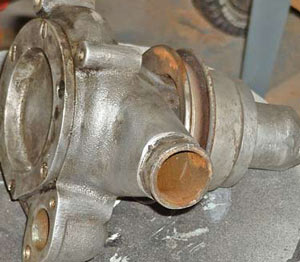 The Maserati pump, looking to be in pretty good shape.

We looked the pump over and realized it was designed to be rebuilt. Before taking it apart, however, we researched the Hollander Exchange Manual in hopes of finding other machinery that might have used this particular pump. Unfortunately, no records were kept for Maserati, so the choice was made to take the pump apart and obtain the inner components from a generic source.

Now, water pumps are water pumps. No matter what they look like, they all work the same way. A central, pulley-driven shaft turns an impeller inside the housing, pumping water in and out. The shaft is suspended in two ball bearings (inner and outer) and there are seals at each end to keep water and dirt out. 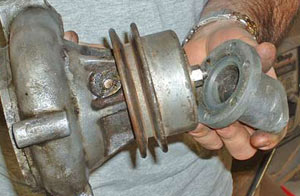 The shaft nut was hidden under the fan spacer.

Disassembly was straightforward, but seriously tedious. After removing the nut holding the pulley to the main shaft all it took to slide it off was gentle pressure on the screw drive of a gear puller. 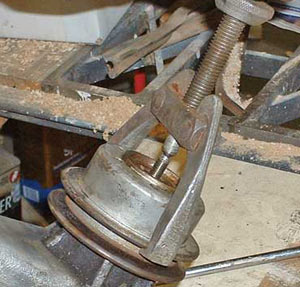 We used our wheel puller to gently pull the pulley off the keyed shaft. 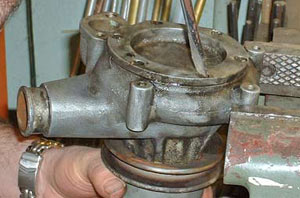 Trying to unscrew the 45-year-in-place screws.

To press out the shaft we had to remove the backing plate, and things got complicated at this point. The screws had been glyptol'd (the forerunner of Loc Tite) and only one yielded to various combinations of screwdriver blades. Even our trick of driving out the screws by hitting the outside of the slot with a cold chisel failed to work. It only destroyed the slots. Therefore, the decision was made to drill out the remaining screws.

After drilling the screws we gently pried up the plate using knife blades and a putty knife, staying acutely aware of the fact that all pump components are aluminum. Too much pressure, therefore, results in breakage and subsequent replacement (translation: very expensive) difficulties. Once the plate was off we pressed out the shaft with no difficulty. It came out easily and after inspection (it was in perfect condition) we put it aside. 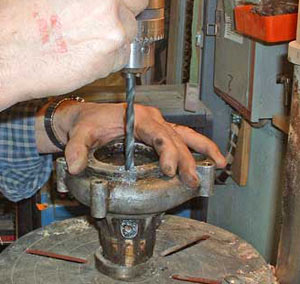 Drilling out the screw heads. 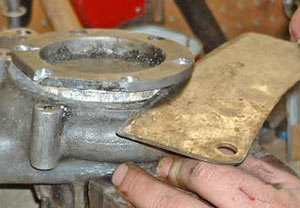 Carefully prying the plate off, trying not to break it. 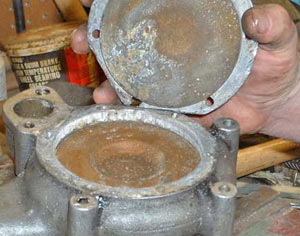 The plate successfully removed, revealing the back of the impeller shaft. 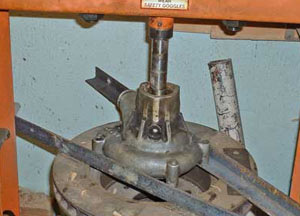 The shaft being pressed out. Note the use of angle iron to hold the housing without interfering with the impeller. 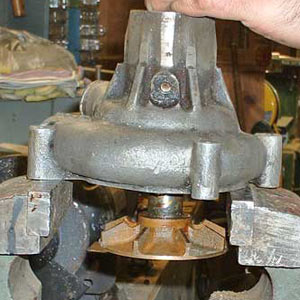 The shaft is almost out... 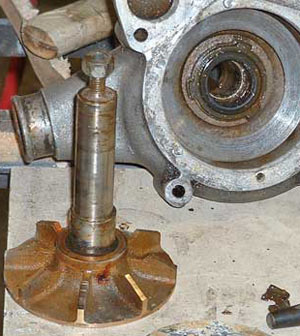 We made the assumption that the 44 year-old seals and bearings were worn out, so no attempt was made to keep them from harm during removal. A keeper-ring was holding the outer seal and bearing and it was removed with a suitably-adjusted ring plier. A quick twist of a screwdriver popped out the seal. 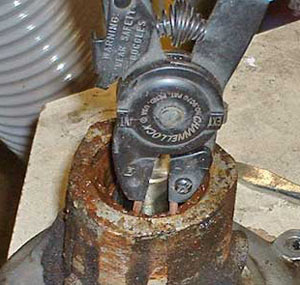 The ring pliers in action.

We removed the inner seal (easily done with pliers) and selected a suitable drift for pressing out the front bearing. We tried taking photos of this operation but due to the tight clearances between the drifts and housing there was nothing to see.

Tip: use good-quality sockets as drifts. The appropriate size can easily be determined and their tool-steel hardness makes them ideal for the task. 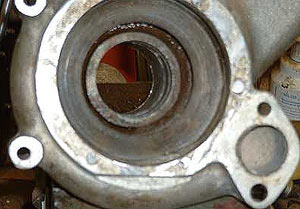 Now, To Obtain The Parts!

As we've written before, bearings are bearings. They can be found from an endless array of suppliers by simply giving them the inner and outer race dimensions, thickness and general purpose (to estimate loads.) It was the inner and outer seals that gave us the trouble. These seals are no longer available, so we decided to look at what we had carefully... 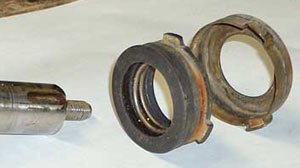 These are the original seals, looking the least for wear.

Looking at the seals, we saw that they were dirty but in otherwise good condition. The mating surface of the impeller looked great as well. Since the pump's failure mode was the bearings and there never was any leak, why not consider replacing the bearings and using the existing seals?

That led us to talk with Tony, the proprietor of Flying Dutchman, a company in Oregon that specializes in rebuilding exotic car water pumps. Tony informed us that the best way to rebuild these old Maserati pumps was to modify them to take modern, easy-to-find shaft seals. We spoke with him about the steps he takes in rebuilding the pumps and decided we'd buy from him the necessary seals and bearings, so we graciously provide his phone number for your convenience: 1-888-595-1110. 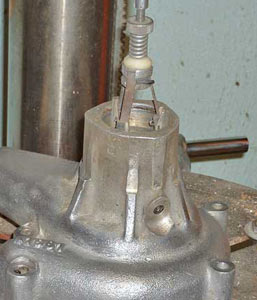 Honing the housing on our drill press.

We took our brake hone and cleaned up the bore in the pump housing before fitting any new parts, a good procedure in any case. Afterward, we sized up our new bearings. We decided to go ahead and reuse the original seals after careful inspection, so onward ever onward... 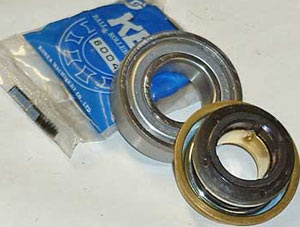 Starting from the inside of the pump, we replaced the inner snap ring, then pressed in the housing that holds the seal, using generous amounts of RTV sealant. Then the seal was coated with RTV and inserted. 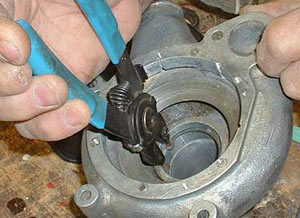 Snapping in the ring. 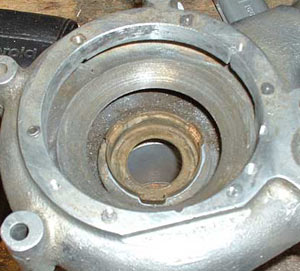 The seal is now nested in its housing. 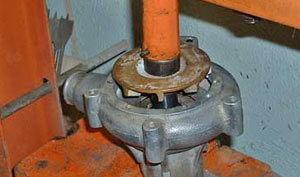 The shaft pressed into the new bearing quite easily.

We then turned the housing upright and pressed in the inner bearing until it met the snap ring at the bottom. Another snap ring was put in its groove above the bearing to keep it from moving down the bore, then we flipped the housing over and took it to the press to drive in the impeller shaft. 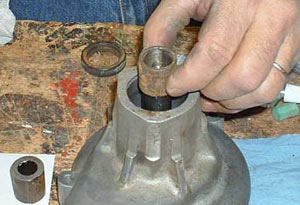 Sliding the spacer onto the shaft.

From there it was back to the top of the housing. The next thing to be installed was the spacer between bearings. This slid right over the shaft, followed by the outer bearing. We tapped this in until it rested on the spacer, then replaced the outer seal and snap ring. 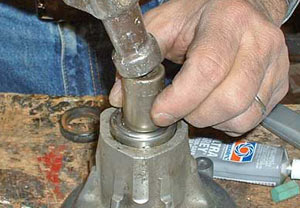 Tapping in the bearing. 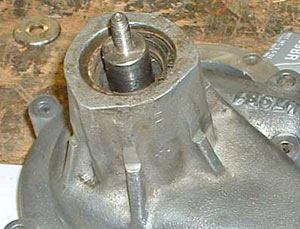 The assembly is ready for the reinstallation of the pulley.

Before any further parts were attached we wanted to test the pump body for leaks. To do so we placed it in a bowl and filled it with water to immerse the impeller/seal interface. We left it for an hour (lunch time!) and came back to verify there were no leaks. With the test successfully completed we installed the pulley followed by the back cover plate, again using ample amounts of RTV sealant. Once everything was assembled we stepped back to admire our pump rebuild. 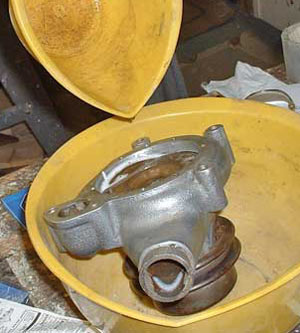 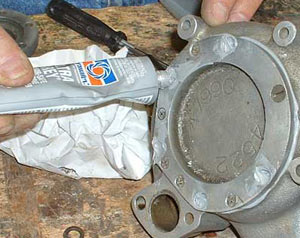 Installing the back plate. 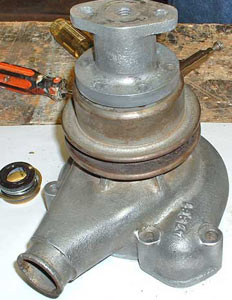