It wasn't long after the introduction of the automobile that designers started looking into ways of taking the work of deciding which gear was appropriate from the driver and making it "integral" to the machine itself. After all, doing so could theoretically make a car more reliable and smoother in operation. By the 1940s the industry had come far enough along that they offered semi-automatic and full-automatic transmissions to the buying public. By the 1950s the majority of the public (75% or more) chose automatics and the demand has never slackened. In fact, only about 7% of new car buyers choose manual transmissions these days.

Basically speaking, automatic transmissions eliminate the clutch pedal and the need for the driver to select gear ratios for specific driving conditions. These devices shift up or down to accommodate the vehicle's road speed, throttle position and engine loading. Regardless of design, all automatics consist of essentially identical components. They work because of the torque converter, or torque-multiplying fluid coupling. 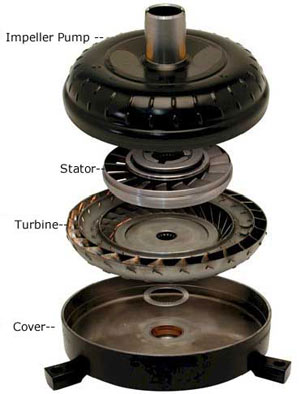 Exploded view of a torque converter

Commonly known as the Torque Converter, this device transmits power from the engine to the transmission. The torque converter is a hollow "doughnut" (actually, the technical term for the geometric shape of a doughnut is a Torus) that has inside two separate "members," the Driving (called the pump, or impeller) and the Driven (called the turbine.) Each of the members is constructed with a series of vanes, or fins, coupled to an independent rotating shaft. The vaned assemblies are placed very close to each other inside the converter shell, which is then filled with oil.

The way a torque converter works is best explained by imagining two electric fans placed face-to-face. If one fan is turned on the air blown by it will easily turn the other fan's blade. Since the medium of power transfer is air in this case, things wouldn't be very efficient. However, if the fans were placed in a sealed container with close tolerances and then filled with oil, power transfer efficiency would be far greater.

If you imagine taking a garden hose and spraying a stream of water into a cereal bowl, the water hits one side of the bowl then curves at the bottom and exits the other side with nearly as much force. To fill the bowl properly you have to either cut way down on the nozzle pressure or find some other way to limit turbulence.

Inside the converter you have the same problem. Every drop of oil that spills away from a vane is a little energy that is lost. However, if you collect all that energy by precisely directing the oil into the vanes you can effectively multiply the torque of the engine until such time that the pump and turbine are spinning at the same speed. It follows, of course, that the greater the difference in relative speeds, the greater the torque multiplication.

To accomplish torque multiplication engineers have curved the pump and turbine vanes to reduce turbulence. They have also added another component that, at high relative speeds, re-directs oil flow into the turbine's vanes to take advantage of "lost" energy. The solution to that problem is the stator, and the converter multiplies torque through the use of one or more of them.

A stator is a small, wheel-like assembly that is mounted between the pump and turbine. Its purpose is to direct the flow of oil into the pump vanes in the most optimized manner. Think of it as the "brain" of the converter.

If there were no stator, this is what would happen: as the pump begins to spin, oil is thrown outward into the vanes of the turbine. It goes through the turbine vanes and then passes back into the pump vanes. However, because the oil is being thrown in many directions it doesn't enter the pump vanes at any specific angle. That means all sorts of conditions exist to rob available power from the pump, and the assembly would only be a basic fluid coupling. The stator's job is to direct the oil flow into the pump at the most efficient angle so that the assembly can multiply torque.

The stator is mounted on a non-rotating shaft and spins with the pump. If any force tries to rotate the stator against the direction of pump rotation, a one-way system causes the stator to lock up. This one-way system is called an "overrunning" clutch and usually takes the form of a sprag or roller (these assemblies will be the subject of another article.) The reason for such a system is that the stator must remain still (locked-up) while there is slow relative speed between the turbine and pump, and then spin freely after the turbine speed reaches the pump speed.

So How Does Torque Get Multiplied?

If you go back to the cereal bowl example above, imaging holding another bowl inverted over the first one. As the water shoots out of the first bowl the inverted one redirects it back, recovering all the lost energy. In fact, Newton's (Isaac, not Fig!) first law of motion states: that for every action there is an equal and opposite reaction. If you apply that law to the cereal bowls you can quickly see that, because the inverted bowl is stationary, its reaction to the energy of the water stream is to direct it back, combining the force of the "reflected" stream with that of the initial stream of water, effectively multiplying the overall forces.

Inside the torque converter the stator does the same thing as the inverted cereal bowl. Therefore, the reaction of the turbine blades on the oil stream is equal to sum of the forces exerted by both the pump and stator (because it's fixed in place.) Thus, you have torque multiplication that decreases as the turbine speed increases. When the car is stopped the torque multiplication is greatest, and at cruising speed there is little or none. Here's why:

When the car is standing still with the transmission in "drive," very little transfer of torque from the pump to the turbine is taking place. As the engine is accelerated pump speed increases and oil is thrown into the turbine with greater and greater force. Leaving the turbine the oil strikes the stator. As the stator is forced backward by the oil, its one-way clutch will stop its motion in that direction, or "lock it up." The oil is then diverted back into the pump, causing vortex flow that increases the oil's speed, thus applying more and more torque to the turbine. The maximum torque multiplication is at the point when the pump has reached its highest velocity and the turbine is standing still, or "at stall."

No One Size Fits All

Stator, pump and turbine designs vary all over the place. There are variable-pitch stators, dual stators, multiple turbines and pumps. All are designed to facilitate torque transfer and multiplication. The most common configuration is still, however, the pump, turbine and one stator design.

So What Does "Stall Speed" Mean? Stall speed is the amount of rpm that a given torque converter has to spin in order for it to overcome a given amount of load and begin moving the turbine. When referring to "how much stall will I get from this torque converter," it means how fast (rpm) must the torque converter spin to generate enough fluid force on the turbine to overcome the resting inertia of the vehicle at wide open throttle. Load originates from two places:

(1) From the amount of torque the engine places on the torque converter through the crankshaft. (This load varies over rpm, i.e. torque curve, and is directly affected by atmosphere, fuel and engine conditions.)

(2) From the resistance of the vehicle to motion which places a load on the torque converter through the drive train. This can be thought of as how hard the drive train is to turn with the vehicle at rest, and is affected by car weight, amount of gear reduction and tire size, ability of tire to stay adhered to ground and stiffness of chassis.