There is no fast or easy way to strip the old paint and primer from sheet metal by doing it your self. You can, if there's an abundant amount of spare cash, have the paint stripped commercially. Such a method is easy (at least for you) and thorough, but requires transporting the panels or body to the facility and picking them up later. There's nothing fast about it, but at least the mess is someone else's.

We'll assume you are as financially-challenged as most of us and wish to strip the metal in the garage, so what follows is an overview of what we found to be the least difficult, most effective, and [relatively] inexpensive method to get to bare metal.

Note: Chemical strippers aren't the only method! Sometimes you need to strip paint/rust mechanically with devices such as wire brushes, sanders, scrapers, etc. The circumstances will dictate which is the most appropriate method, but it's almost always true that the body exterior is best stripped chemically.

For our test we chose a 50 year-old hood that had been repainted (at least once,) hiding the original blue finish. We bought two widely-available chemical strippers at the local home center. Both are made by the same manufacturer: StripEase. These strippers contained methyl chloride, one of the most caustic substances around. One, the KS-5, has more of the substance in it, so it acts in as little as 15 minutes. The other acts in 30 minutes, and was the stripper of choice because of its longer lifetime out of the can. The fast stripper dried up in about 25 minutes and needed to be scraped off and reapplied. A gallon of these strippers costs around $20.

We also ordered Eastwood's DeKote ($32), an environmentally safe stripper that contains no methyl chloride and cleans up with water. We also bought some "orange" stripper, another environmentally safe product. All products were paste-type. That is, they are viscous enough to stick to vertical surfaces without running off. 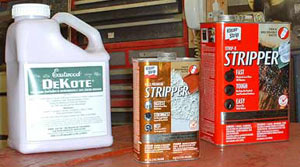 We tested Eastwood's DeKote, and 2 versions of Strip-Ease's Klean Strip.

We ruled out the orange stripper because such materials are chiefly designed for furniture use indoors. That limited its overall effectiveness in the garage, so it was eliminated.

Spreading any stripper is best done using a cup or tin can (pour some in) and a disposable brush. Instructions generally tell you not to brush in multiple directions and to apply thickly, as we did. It took less than 5 minutes to spread the whole hood. 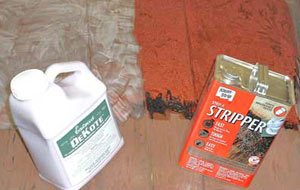 We brushed half of the hood with thick layers of DeKote and Klean Strip.

Experience has led us to let the stripper "work" for a long time, since it takes quite a while for the solvent vapors to penetrate the old paint. The idea here is to use as few coats of stripper as possible (cost considerations) by giving each coat time to penetrate deeply. For the first coat we waited 5 hours and came back to examine the bubbled paint surface. 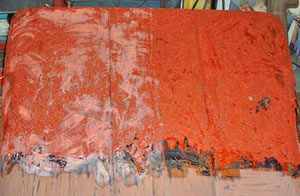 After 5 hours the paint was bubbled and ready for stripping. 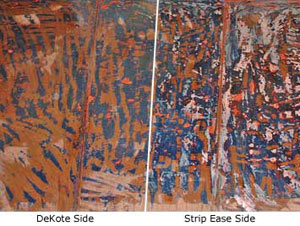 Comparison of DeKote and Klean Strip

That brings us to the "tools" department. No chemical stripping operation is going to eliminate the need for scraping tools unless the entire body is dipped. Therefore, several items are needed: two basic scrapers (one small, one large) that are available at any hardware, paint store or home center; a stiff putty knife or drywall knife; and a screwdriver (for replacing the scraper blade.) 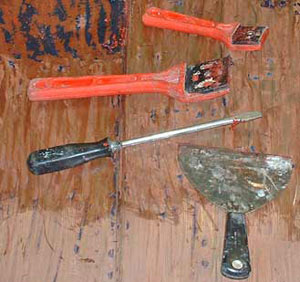 The tools needed for your paint stripping job.

Overall, it was apparent that DeKote worked better than the others, especially when there's sufficient time to let it do its thing. It never dried up, so scraping it off wasn't difficult. It also doesn't need as thick a film, so less of it is needed for any given area. That being the case, we coated the entire hood, let it work overnight and then scraped off everything the following morning. 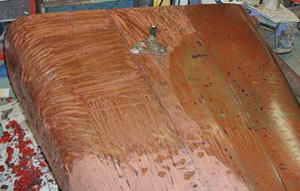 That left us with an almost-bare metal surface, with hundreds of little flakes of paint and a thin film of primer still adhering. Experience again told us the best way to remove the last remnants is to wet coarse steel wool with methyl chloride stripper and scrub away what's there. In less than 20 minutes we had the entire surface cleaned up and rinsed with mineral spirits (it not only cleans but it neutralizes the strippers). 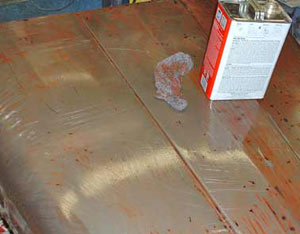 After scrubbing the hood with mineral spirits and coarse steel wool, the hood is starting to show promise.

You need a variety of strippers. DeKote is well worth the money because you can strip a larger area more effectively per gallon. It's easy to use, doesn't have a headache-inducing odor and is environmentally friendly. On the other hand, you can't beat the speed of the really caustic strippers that contain large amounts of methyl chloride for cleaning up residue. However, you need lots of ventilation (or a breathing mask) and protection for your eyes and hands. 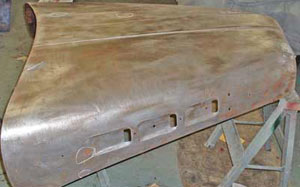 The bare hood. After carefully going over the whole hood surface, we marked areas needing further repair with chalk.

We keep a gallon of both types on hand.