How to Restore a Classic Car Horn

Restoration of our classic car horn was basically a simple process.

The first thing you need to do when attempting to restore a horn is check it out electrically. If it can't be restored functionally there's no sense in going to all the trouble cosmetically. Obviously, that means connecting it to a battery or charger and listening (ear plugs might be a good idea in case it works!) for any "life" in the old unit. We did so with our subject horn, using a battery charger. It made little bleating noises, somewhat like a lamb from 100 yards away. That meant a restoration was possible. 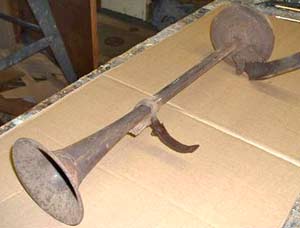 This is where we started... 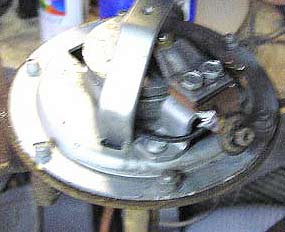 The cover has been removed...

Once a decision to restore was made we started taking the horn apart. Its rusted brackets were removed, then its domed hood. Once that was done we had a mostly-disassembled horn.

Now we could remove the "guts" of the horn. Once that was done we could survey the extent of damage. The electrical side of the assembly was in very good condition, showing no appreciable wear, burning or even dirt. The other side, however, was caked with accumulated rust and blown-in debris from spending its life under the hood. 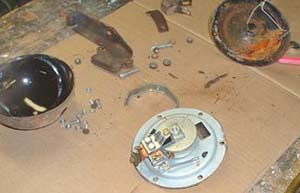 The rust was brushed off the horn's metal diaphragm and we were pleased to find no holes or rust-through. The paper gasket between the diaphragm and horn barrel was deteriorated, but we planned to replace it with RTV anyway. Time to test for mechanical movement... 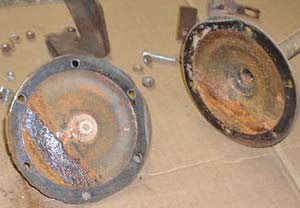 This shows what 50 years under the hood can do.

While new horns create their sound electronically, old horns worked much like speakers, just using more current. Horns used strong electromagnets that moved a central armature connected to the flexible metal diaphragm. When switched on the armature moved to its mechanical limit, disconnecting power to the electromagnet. As it relaxed back to its starting point, electrical contact was again made and the armature would start its travel again. The repeated movements of the armature created the vibratory noise in the diaphragm that carried out the horn barrel and into the air. Failure could occur in the diaphragm itself (cracks, breakage, holes), the coils of the magnet or the switching contacts at each end of armature travel. All these needed to be inspected and checked out.
Also, the total distance the armature travels dictates the sound of the horn, so we had to make sure we readjusted everything to come close to its original pitch. 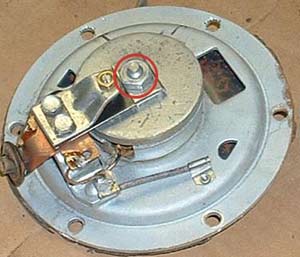 A visual inspection of the mechanical components (contacts, flex springs, general assembly) showed they were in perfect condition. Next, we did a resistance check of the coils in the electromagnet to make sure the circuit wasn't "open" or "shorted." The meter showed 2.3 ohms resistance, about what we would expect for a high-current coil. 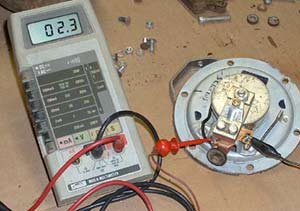 Checking resistence of the electromagnet's coils.

Next we checked the wire-wound resistor that takes one side of the coil to ground. Over time this resistor tended to fatigue and fail, much like a heating element in a toaster. Ours was in excellent visual condition and the resistance check showed 2.9 ohms, again close enough to what we believed was a 3-ohm resistor. 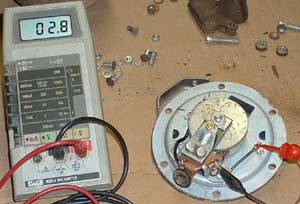 Our confidence was running high at this point, so the decision was made to do a thorough cleanup of the internal parts and a refinishing of the externals. All that needed cleaning internally was the diaphragm, so a gentle scrubbing with water and an SOS pad worked wonders. After that we disassembled it from the main armature shaft. Close examination revealed some rust-pitting on the diaphragm, but no sign of imminent penetration. 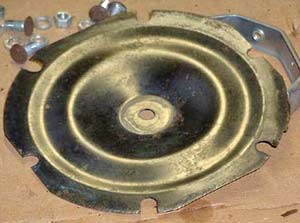 The diaphragm after careful cleaning.

We reassembled the mechanical components and took the horn housings and brackets to the sand blast cabinet. A few minutes in there cleaned up everything and made it ready for powder coating. Why powder coating? Well, for one reason, the horn lives under the hood in a nasty environment. Another reason is that we had several gloss levels of black powder, and a third reason is that we could coat the horn, reassemble it and store it away in less than two hours rather than wait a few days for paint to cure.

The Test Your Restored Horn

At last, we could test our newly restored horn, so we connected our 12-volt battery charger to the appropriate points on the assembly. Why 12-volts and not 6 volts? Because the electrical system on our project will be upgraded to 12 volts and we wanted to see how differently the horn might sound*. Our test, using a 20-amp fuse in line, worked perfectly and the horn blared out quite well, not to mention loudly. 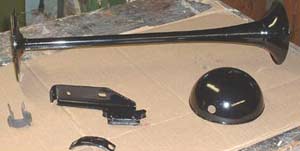 The horn and its brackets after powder coating.

*You might ask why we didn't re-wire the horn for 12 volts or put a resistor into the circuit to step the voltage down to 6 volts. The reason is that the horn's wire coils are quite large and can handle the extra voltage without heating up very much. There is no electronic circuitry that can be damaged, just electro-mechanical components like those of a starter motor — another item we can run directly on 12 volts, as it just spins faster. On the other hand, light bulbs, radio, voltage regulators, generator, relays, ignition and windshield wiper motors have to either be replaced by 12-volt parts or the voltage to the originals must be stepped down to 6 volts. We'll probably replace them.