First, Do No Harm:
Maintaining An Unrestored Original 1958 Jaguar XK150-S

Our friend's 1958 Jaguar XK150-S is a family heirloom. Now in his 60s, our friend Bill accompanied his father when the car was delivered new at a dealership near their home in Vermont. 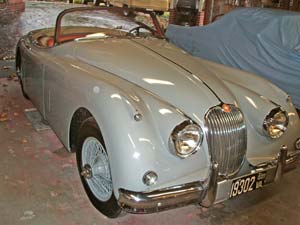 The Jag as it sits. It's all original but some years ago had its body repaired and painted.

His father drove the car very little over the years, only accumulating 42,000 miles at the time of his death. Bill inherited the car and although it had been garaged since new, it had never been "babied." Therefore, rust had crept onto the fender bottoms and trunk floor and time had taken its toll on the instruments, interior surfaces and mechanicals. 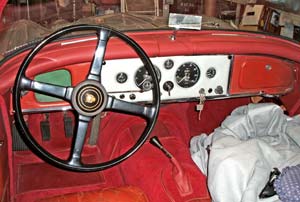 Bill had the rust repaired some years ago and the car was stripped and repainted using the very same lacquer that was used by the factory back in 1958. Everything else on the car was left original and Bill stored it away for over 15 years. A while back Bill decided that he would drive the car on outings and club events, so we carefully disassembled the instrument panel and repaired/cleaned all the gauges and switches. We did the same to the seats and interior panels, carefully maintaining the original materials. The canvas top was untouched and although it can be raised and unfolded, Bill chooses to leave it intact and unused.

The top's fabric tonneau cover is original, but in such deteriorated condition that no one wants to try to fold it.

The Jag is back in our garage for some routine maintenance and we thought we'd show you what is being done to the car. The list of repairs include: make the parking brake functional; change oil and filter; try to fix engine oil leaks; fix leaking fuel pump; fix pulsating brakes. 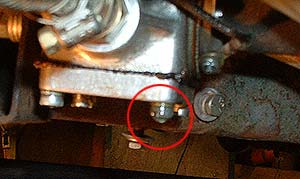 The fuel pump leaks from the bottom plate mounting screws. Notice the drop of fuel hanging from the nearest one (red circle).

We were concerned about touching a 50 year-old parking brake mechanism underneath the car, but it turned out to be in decent condition. The brakes had been rebuilt during the rust/paint repairs and all that was wrong was a stretched cable running to the wheels. We were able to tighten up the adjuster far enough to make the parking brake functional but the cable will eventually have to be replaced. 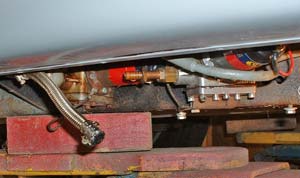 We dropped the input line from the pump inpreparation for disassembly. The line had to be blown back to the tank to prevent siphoning.

The XK150S has twin pumps located under the body, immediately to the rear of the passenger door opening. They sit outside the frame (not a great place in a side crash, but safety concerns were very different in 1958) and can be accessed with the car on a lift. The forward pump's base plate dripped gas and attempts at tightening the screws were futile.

We had no choice but to remove the inlet hose, which meant that we quickly had to insert an air hose and blow the fuel back into the tank to prevent siphoning all the gas onto the garage floor. With that messy chore done we could remove the bottom plate, revealing a poorly-constructed cork gasket. 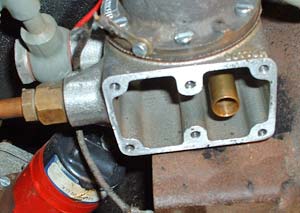 Nothing wrong with the pump, only the bottom seal design. We had to do some re-engineering. That other pump in the rear distinguishes the "S" series from stock XK150 cars. "S" cars had dual pumps and triple carburetors.

The gasket was deemed worthless, so we created a new one out of rubber. Using a hole punch we made 6 precisely-located holes for the mounting screws and then cut out the center area with scissors. There was no need for precision in that area. We then reinstalled the gasket and spread Permatex fuel-resistant sealant on the screw threads. So far so good, as the pump doesn't leak. 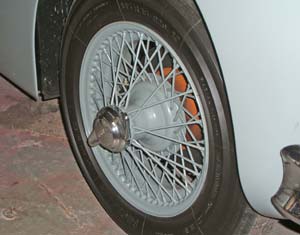 The original painted wheels look fine, but the rusty hub behind needs attention. We cleaned and prepped the metal and brushed on black rust-prevention in a flat tone.

After removing the wheels (no mean feat, by the way, because the shop that had replaced the tires recently must have put the knock-offs on with a pile driver! We had to position the knockoffs horizontally and lower the car onto a 4X4 block of wood to break them free, and even then we had to use a large rubber hammer) we measured the front rotor runout with a dial indicator. The right wheel was over 10 thousanths and the left about 5 thousanths, both sufficient to cause brake pulsation during stopping. 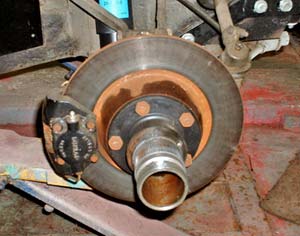 We removed the brake pads and sanded the glazing and wedge-wear smooth. Afterwards we loosened all the bolts holding the rotors to the hubs. We re-torqued the bolts and measured the runout, noting that it had decreased a few thousandths on each rotor. That told us that they had originally been torqued incorrectly and that most of the runout was mechanically created.

We loosened the bolts again and marked which side of the rotor on which the greatest runout was measured and put a shim (a piece of paper) between the rotor and hub mounting surfaces. Once the bolts were properly torqued we found both front rotors within the .003 runout spec. 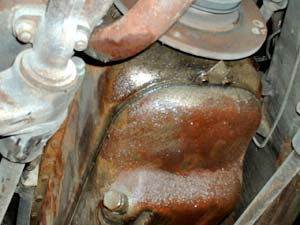 Sure, the oil pan is leaky but that's not bad for 50 years.

The oil change went badly. Draining and replacing the oil itself (although it had been in the car for a very, very, very long time and had turned to syrup) was no problem, but the old Jag uses a canister filter. The canister itself is sealed to the oil filter housing with a tiny, tiny O-ring that comes with the filter cartridge. That's where the fun began...

It took two hours of searching in the DC area to find the one import auto parts store that had an old filter cartridge in stock. They could have charged a fortune for it, but fairly priced it at $12.50. So far so good, at least we thought. However, when we removed the canister and tried to get the old O-ring out we discovered that it had been in place for (this is no exaggeration) at least 35 years!

The O-ring was petrified. We had to create a little chisel from a small screwdriver and, bit by bit, chew the old O-ring out. It took 1.5 hours to remove it. The new parts went in okay after that and we ran the engine to full operating temperature to check for leaks.

The owner had driven the car for all these years without seat belts and was getting nervous. He provided a set of aftermarket belts that we installed without undue effort. All it took was some careful measurement and equally careful drilling through the floor to mount the belts. Now, at least, the car is more reasonably safe to drive.