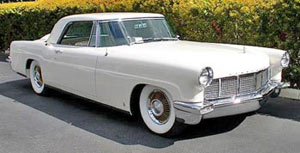 There was a Lincoln Continental model produced during the 1940s, as almost any auto buff knows. It was elegant and expensive for its time but did not earn significant profits for Ford. During the late 40s the auto industry was in such turmoil that Ford decided to drop the Continental model in favor of the introduction of the all-new 1949 Ford.

In 1952 Edsel's son, William, was made head of the Special Products Office. That group had made surveys to dealers and customers in an attempt to forecast what vehicles the company should produce for the 1950s. Those surveys indicated the demand for upscale cars so William responded by creating the Continental Division.

The Continental team decided to design and produce a car that would be a tribute to [the recently deceased] Edsel Ford. It would be elegant, comfortable, powerful and would attract the rich and famous. It would be as well made as it looked. In fact, the team decided to make it the "Rolls-Royce" of American cars. The styling would be called "Modern Formal," a great marketing term then and now. However, things took on a life of their own from that point...

No, It Was Never Called "Lincoln Continental Mark II"

Let's get the story straight right away. The Continental shared drivetrain and some suspension components with Lincoln. Other than that it was a totally different car. A new perimeter frame was designed for the Continental and the floor pan was attached to the bottom of that frame for "step-down" entry. A low driveshaft tunnel was dictated for the car and this proved to be an engineering challenge. The result was a very expensive, complicated three-universal driveshaft.

The standard '56 Lincoln engine was used in the Continental but only after each one was carefully balanced, test-run and inspected for unusual wear. Every Continental's transmission was tested in another vehicle, also disassembled for inspection and then installed in the new car. All hardware was aircraft quality and carefully torqued.

Inside the Continental there was Bridge of Weir leather, lush carpeting and special instrumentation. Painting standards for the car gave them "show" finishes, far better than what the public expected.

Doesn't This Cost A Lot?

When all that care is taken in the building of a vehicle the costs are quickly going to escalate beyond control. That's exactly what happened in the case of the Continental Mark II. In an era when a typical family's yearly income was around $4000 and a mid-level car could be had for less than $2500, the Continental's price tag came in at a whopping $10,000! Granted, the car came with power-assisted everything and the only option was air-conditioning, but that was still a lot of money for any but the most well-heeled buyers.

Although it looked lean and elegant, the Continental Mark II was a big car. Its wheelbase was 126 inches, overall length 218.4 inches and its weight was 5190 pounds. The smooth Lincoln engine put out 300 horsepower but pulling all that bulk made for a leisurely 0-60 time of almost 16 seconds and fuel mileage that barely squeezed out 13 mpg.

In May of 1957 production was stopped forever on the Continental Mark II. It was not selling well and Ford was losing over 1 million dollars a year on the program - not much by standards of the time but still enough to question its continuation. The Continental division was given over to Lincoln and the production plant was converted to manufacture the new Edsel (Now there's a bit of irony!) The subject will be debated for years but the prevailing theory on the demise of the Continental is that Bob McNamara didn't like it, nor did William Ford's older brother Henry II, who took over the reigns of the corporation.

If It Was So Good, Why Doesn't Anyone Want One Now?

Show-level Continentals sell today for about $30,000 and good, restorable examples can be had for $3,000 (far less than a T-Bird of those years.) Why aren't the 56-57 Continental Mark II cars more valuable in the collector market? Well, if anybody really knew what makes one car extremely desirable and another not so, that person would be very, very wealthy. We think it's a combination of a short production run that produced very few cars - just over 3,000 total. That means relatively few collectors have ever really seen one up close.

Add to that the limited number of restoration parts available and the Continental becomes an expensive car to restore. Also, the car was overshadowed by its little cousin, the 55-57 Thunderbird. Too bad, really. If the Continental Mark II were about a ton lighter and had only two seats, it probably would have been a collector's dream.