In every restoration you will encounter broken, rusted away or sheared off fasteners. Usually the problem is solved by replacing with new hardware. However, sometimes a piece of trim is held on by a specialized bracket that holds the fastener and the threaded portion of the fastener breaks off. This is the case with these Ford emblems: 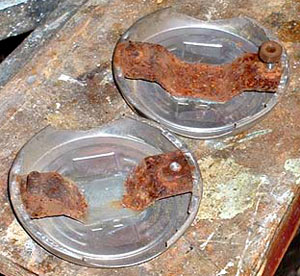 Fifty years of rust and corrosion has taken its toll on these brackets.

The repair started with the removal of the brackets from the emblem. All we needed to do in this case was rotate the bracket until its ends reached the open areas of the emblem.

Now we had to remove the rust, and the best tool for these particular brackets was our wire wheel. We just kept brushing away the rust until we saw a good metal surface. 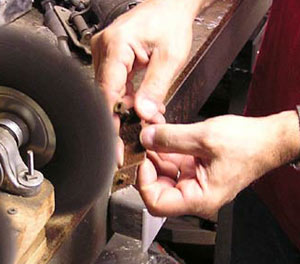 First thing was to remove rust and scale from the brackets using our wire brush. Use caution to keep fingers away from brush.

Next, we had to remove the broken threaded fasteners from the bracket. Once the bracket was cleaned we realized these fasteners were carriage bolts that were pressed into the sheet metal. We didn't want to hammer them out because we'd most likely bend the bracket, so we went to the grinding wheel to take off what was left of the threaded shaft. 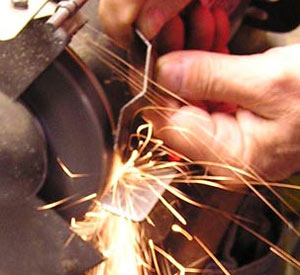 After wirebrushing, the remainder of the broken off bolt was ground off. 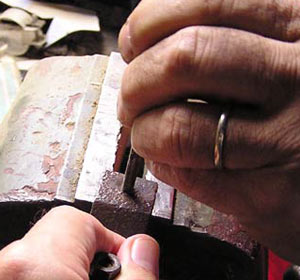 We held the bracket so that the head of the carriage bolt was between the jaws of the vise and used a punch to tap it out.

Once the grinding was finished we could see the shape of the carriage bolt's square shaft. This allowed us to accurately place a drift for tapping out the remainder of the bolt. 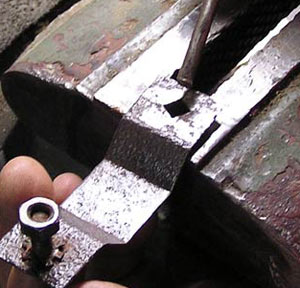 This photo clearly shows the square hole once occupied by the carriage bolt.

Now we had two brackets that were cleaned up from rust and ready for replacement carriage bolts, so the next step was to paint them. This will prevent future rust problems, of course. 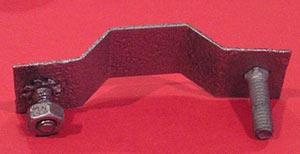 Here's the finished bracket. A coat of paint has been added to prevent further rusting. The new carriage bolt was a tad longer than the original, but it doesn't interfere with anything so we decided to leave it.

We stopped by the hardware store and bought a couple new carriage bolts, 1/4 inch in diameter and 5/8ths inches long, to match the originals. We gently pressed them into the square holes in the brackets and the problem was fixed!