For reasons we don't quite understand, all the belts driven by the crankshaft seem to be called "fan belts." In actuality, of course, the one driving the cooling fan (attached to the water pump) is the fan belt and all others should be called whatever they are driving, but that's the way things have evolved. We'll just call them "belts."

Older cars generally had only one belt that drove the fan, water pump and generator. Later on another belt was added to drive a power steering pump and soon afterward another came along to run the air conditioner compressor. Whatever your engine/accessory configuration, changing belts is an easy and relatively straightforward, if not a dirty task. We're going to change the alternator and A/C belts on this Corvette engine, partly because it's been chewing up A/C belts and partly because it is clean enough to photograph details. 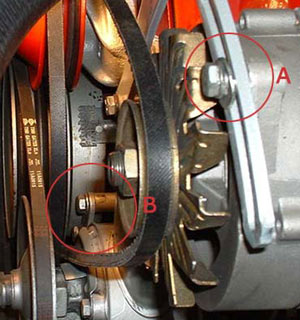 Every engine-driven accessory has some sort of adjustment on its bracket attaching points. In the case of this Corvette the alternator's adjusting fastener is right at the top. The A/C compressor is adjusted with a bolt that passes through a flat plate on its front flange.

To loosen the belts you need to undo the adjusting bolts and push the device in towards the center of the engine. This can generally be done without loosening any other mounting hardware, but if the accessory is too tight you might have to do so. Just remember to count how many fasteners have been loosened so you won't forget to re-tighten them all.

In this Corvette engine the power steering belt is the most forward one. Even though it doesn't need replacement, it prevents removal of the other two. Therefore, all three accessories have to be loosened and all three belts removed from the crankshaft pulley. 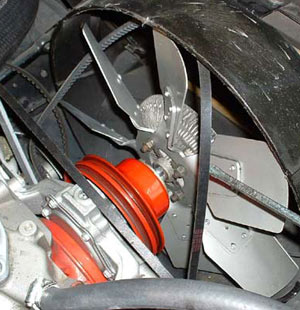 After removing belts from pulleys, remove them by lifting them over the fan.

Once a belt is loose it has to be removed from the car. In the majority of circumstances you won't have to remove the fan, but you will have to "thread" the belt around the fan blades to get it out, being careful not to damage the radiator fins.

Installing the new belt around the fan is done the same way. Once the belt is on, make sure it is being routed into the correct groove in the crankshaft pulley. If the belt isn't traveling in the same plane with all pulleys it contacts it won't last long, so double-check alignment before tightening things down.

Tightening belts properly is very important. If a belt is too loose it will vibrate, wear prematurely and possibly damage something if it breaks. Belts that are too tight place undue stress on water pump bearings, idler pulleys and other parts. In addition, the belt itself will stretch and fail. Virtually all shop manuals give instructions on how to measure proper belt tension, so follow them carefully. 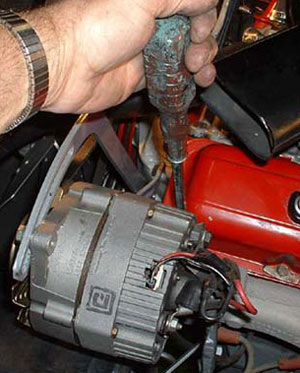 Leverage the alternator and tighten the bolt.

To tighten a belt you need to move the accessory outward. This is generally difficult to do by hand, so some sort of wedge, or lever, is necessary. We highly recommend using a broom handle or some other wooden device for this task. Metal levers or wedges can damage valve covers or bend the casings of some devices such as power steering pumps, creating more work and expense. Wood levers will usually break before damaging engine components.

Once your belt(s) are tightened, go back and check all fasteners to make sure you haven't forgotten any. Then run the engine a few minutes and watch how the belt "tracks." It should move smoothly, without bouncing or noise.