How Automotive Suspension and Steering Works

Note: Unless your classic car is a Cord, Morris Minor, Olds Toronado, Jeep, or a mid-70s GM X-Body, it is almost certainly a rear-wheel-drive vehicle. We want to make that clear, since this article will only deal with the most common layouts you might encounter in old cars. Also, no mention of McPherson Struts is made, since these devices are generally found on more modern vehicles.

Since the beginning, cars have been suspended by some sort of road shock-cushioning system that smoothes out the irregularities of the road surface and maintains stability. Otherwise, driving them would be so uncomfortable and dangerous that some other form of transportation would be in use today.

Suspension systems use springs to accomplish this task. Spring steel is simply steel that, when bent or twisted, returns to its original shape. In doing so it absorbs the energy created by the movement of the vehicle. On the front end of the car the general suspension systems employed by manufacturers were — and still are, in two cases — leaf springs, torsion bars and coil springs: 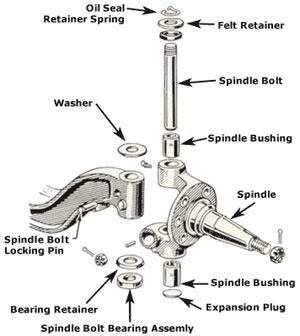 Leaf Springs were hand-me-downs from the carriage trade and are still used today on a few rear axles, trailers and trucks. They are easy to manufacture, inexpensive and relatively effective, although more difficult to "fine tune" to a chassis. The last cars to utilize front leaf springs were the British AC Bristol and Ace sports cars. The AC Cobra was derived from the Bristol.

Torsion Bars were widely used by some foreign manufacturers as well as Chrysler during the 50s, 60s and 70s. The chief advantages of torsion bars are their adjustability and "compactness," when it comes to space considerations. Stabilizer bars, used in virtually all vehicles today, are torsion bars.

Coil Springs were found early on to provide the best combination of ride, control and cost of manufacture and are used in some form on nearly all cars today.

The coil spring, mounted between the upper suspension arm (control arm) and the car's body, is a very common method of arranging the front suspension. Another common method is the mounting of a coil spring between the upper and lower suspension arms, henceforth called control arms. Upper and lower control arms are almost always of unequal length. The reason for doing so is to provide a way to keep the wheel as close to vertical as possible during its up-and-down travel as it moves along the road surface.

The control arms are connected to the car's body at one end by moving joints that are supported by rubber bushings, their purpose being to help locate the arms in space, allow movement and to help cushion road shocks that would transmit through the car body if only bolts were used.

At the wheel end of the control arms are normally found ball joints. Ball joints are used to carry the loads on the wheel while allowing it to move up and down in space. Depending upon design, ball joints can be under tension or compression — an important consideration when attempting to remove them — because spring tension must be properly relieved to prevent serious injury. 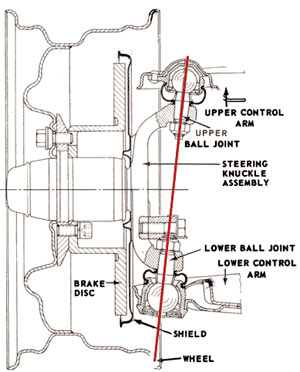 As they move ball joints wear, causing looseness in the suspension system that in turn causes steering problems and tire wear. All ball joints have "play," or clearance specifications, beyond which they should be replaced or (in some designs) rebuilt.

Older cars, especially ones with leaf spring front suspensions, generally were not equipped with ball joints. Instead, manufacturers utilized a pivoting metal assembly fitted with bushings to tie the control arms together.

Something has to tie the control arms, ball joints, springs and steering system together, as well as provide a mounting for the wheel assembly. This is referred to as the spindle. The spindle is typically a forged metal component that has provision for mounting the ball joints at top and bottom. In the middle the spindle is fitted with an axle hub, to which the wheel and its bearings are attached. The spindle also has a fitting to mount the steering components, stabilizer bar (if any) and anti-sway bar.

As the car moves down the road the wheel pushes the spindle up and down and the steering rotates it vertically right and left. This motion is transmitted through the ball joints and control arms, as well as the steering components and stabilizer assemblies.

The above components are in place to allow the car to move safely and predictably down the road, but something is needed to keep the wheels from bouncing wildly when they hit bumps in the surface or dips in the roadway. If not checked, a wheel's tendency to bounce would allow the springs to expand and contract (rebound) over several oscillations, much like a Slinky.

The component that prevents this action is the shock absorber. When a shock is operating properly it controls the rate of spring rebound and compression, thus assisting in limiting body sway.

The purpose of a shock absorber is to keep the tire in contact with the pavement!

Shock absorbers were used early on and have gone through a number of designs over the decades. During the 20s and 30s a popular shock absorber was the "knee action" type, a complicated hydraulic device that had a tendency to leak and wear out. This was universally replaced by the telescopic shock absorber, or "double acting" shock absorber.

The telescopic shock consists of an outer casing, central piston rod, upper and lower fluid reservoir cylinder, piston, control valve, fluid fill and provision for mounting on the car. When the shock is extended the piston is pulled upward, forcing fluid through the control valve into the lower chamber. When compressed the fluid is forced through the piston valve into the upper chamber, and so on.

All manual steering systems contain the same basic components, although individual designs vary tremendously. The most popular systems are the recirculating ball worm and nut design and the rack and pinion. The basic components are as follows:

The steering wheel is the only visible component in everyday use. The wheel itself is attached, usually by means of a spline, to the steering shaft.

The steering shaft is a hardened steel rod that transmits rotation of the steering wheel to the rest of the system. Depending upon the car's size and engine configuration the shaft may be solid or articulated (utilizing U-joints or other coupling devices) to clear around engine bay components.

In recirculating ball worm and nut designs the components are mounted in a gear case that is normally attached to the car's frame. The components consist of the ball nut, worm gear, sector shaft and sector gear. The steering shaft is connected to the input shaft of the gear case, either directly or through the use of a universal joint.

As the steering shaft turns, the input shaft's worm gear moves the ball nut along the worm gear. The ball nut's teeth, intersecting with the sector gear's teeth, forces the sector gear to rotate the sector shaft. All components are set in bearings and lubricated either with grease or special oil. (Some manufacturers built steering gear cases with just a worm gear driving the sector. This configuration works well but wears quickly. To solve this problem, manufacturers turned to the ball nut, in which ball bearings follow the worm gear grooves, dramatically lowering wear rate.)

Typical linkage consists of a rod that runs horizontally under the car, usually called a "drag" or "center" link. The pitman arm connects to one end and as the pitman arm moves the link follows from side to side. Attached to the link are the steering arms.

Steering arms, commonly called "tie rods" are attached to the center link. These have ball joints at both ends so that any up and down movement of the wheels can be accommodated without binding. The tie rods are designed to be adjustable in length so that alignment adjustments can be made.

And Now, Rack and Pinion Steering

Rack and pinion steering systems differ from recirculating ball systems in that there is no gear case, pitman arm and center linkage. Instead, the steering shaft connects to the rack assembly, which in turn connects directly to tie rods out to the wheels.

The chief advantages of rack and pinion systems are cost, compactness and less overall "slop" in the steering system due to fewer joints. Such systems give a more precise "road feel," a desirable element in modern vehicle design.

Power steering systems utilize essentially the same components, with the addition of an engine-driven hydraulic pump and associated equipment. In most systems the pump pressurizes hydraulic fluid (basically automatic transmission fluid) and pumps it to either the steering gear case or a power cylinder attached to the center linkage. Valves in the system direct the pressurized fluid in the proper direction when the steering wheel is rotated.

Power assist greatly reduces steering effort. Such systems were introduced in the 1940s and gradually took the place of manual systems during the 1960s. If the power steering pump fails for any reason, or if the engine stops running, the driver always has manual control of the steering, although effort may be considerable.

All front suspension components must be designed to keep the wheels in the proper orientation. Otherwise, tire wear would be unacceptable, steering effort could be difficult and the car might be unstable or difficult to control.

Engineers go to great lengths to design front suspension systems to provide ride and handling as well as tire life. The geometry of suspension/steering systems is classified by the following terms:

The spindle on which the wheel is mounted is not set vertically between the control arms. Doing so would cause an unstable rotation about that axis. Therefore, manufacturers specify an amount of slant off the vertical, measured in angular degrees. The slant can be either forward or rearward, expressed as "positive" or "negative" caster angle.

Front wheels are generally not perfectly parallel to each other, due to the way the suspension's geometry changes during turning, forward movement and its adjustment to the curvature of the road surface (all roads have a "crown," or a convex shape to shed water to the sides). Engineers specify a degree of Toe-in — the wheels are slightly closer together at the front than at the rear — or Toe-out — the wheels are farther apart at the front than at the rear.