Jim Honeywell has been a car lover since his youth, but the last 20 years have seen his greatest enthusiasm for his hobby. He has purchased and sold many a car, but retains his favorite which he acquired 16 years ago, a 1974 Jaguar E-Type convertible. Besides some heavy maintenance on his E-Type, he did a ground-up restoration on it and on a 1958 Corvette convertible. Jim retired to the wine country in northern California in 2000, where he spends his time touring in his E-Type.

Really! It has no car jacks that might move as you work. You don't have to move heavy equipment in and out, back and forth. It is permanent, effective, easy to make, and easily removed. The ramp is made of wood and puts your car up high enough so that you can get under it to do many of the tasks that you couldn't accomplish without one.

My 1974 Jaguar E-Type convertible has a ground clearance of just 3 inches, making any work under it cumbersome at best. I could purchase short steel ramps to drive up upon, but they slip occasionally and have to be stored somewhere. They aren't high enough, and don't boost both ends of the car simultaneously. I considered renting some time on a lift in a professional garage, but work would be at someone else's convenience, not my own, and probably at unusual hours. Then there's the mechanic to pay.

I moved recently, leaving behind a nice garage with a hydraulic lift that would boost the car 44 inches. In my new garage I have less room and, since I'm now retired and spending less time involved in auto restoration and maintenance, I decided not to purchase and install another lift. I still have an occasional need to get under my E-Type, and I don't want the high cost of someone else doing maintenance on it that I already know how to do. 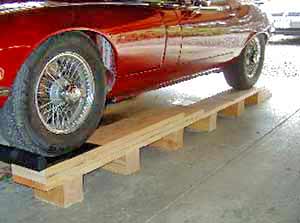 So I built two ramps of wood which would raise the car high enough for routine maintenance. The ramp's foundation is made of 6" x 6" blocks, nine inches in length, mounted cross-ways to the 10 inch planks they support. The 2" x 10" planks are nine feet in length, just long enough to contain a full tire print at each end. I made the ramps as short as possible because my garage space is somewhat limited. I used 2 1/2" dry wall screws as fasteners, so that I could easily dismantle the ramps if needed.

In order to drive up onto the ramps I nailed pieces of 2" x 4" together to configure a sloped ramp-entry. 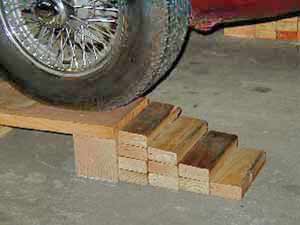 Upon reflection, I decided that, although my initial plan of using a single plank would allow me to get under the car, I wanted more clearance under the front end. So I added two more planks, each shortened, and stepped, raising the car as I moved forward. This gave me an additional three inches of height underneath, adding to the existing seven inches. That, I figured, was enough. 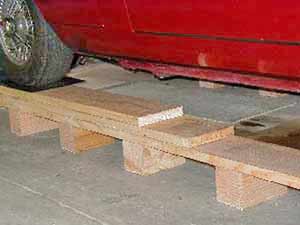 The additional planks not only added strength but gave me the height I was looking for.

And it was. To keep the ramps from slipping (if you try to drive onto them un-anchored you'll just push them forward) I used Liquid Nails under each of the 6" x 6" blocks. Once it set, I had no problem with slipping.

My first tasks were to remove the exhaust system, replace the donuts in the joints, tighten all the nuts and bolts connecting it to the down pipes, change the oil and filter, and tighten all the transmission pan bolts (a leak onto the exhaust pipes created an embarrassing amount of smoke every time I drove the car). I wanted to re-cover the exhaust with a heat wrap (to move the heat out the tailpipe and keep the inside of the car cool) and to paint the wrap to keep any oils from collecting on it (and smoking).

Voila! I accomplished all my tasks easily under the car. The cost of cost of getting the car up high enough was minimal, and I am able to do the work in my own garage on my own time. The Liquid Nails makes the two ramps permanent, but they can be easily broken free using a hammer.

One difficulty still exists, though. Since I made them permanent, I have to park on them all the time. Getting up onto the ramps is not a problem, just a little difficult. The ramps are by design somewhat narrow, not much wider than the tires. Seeing where to go as I move forward is the difficult part, so I purchased a three-foot-square mirror and placed to the side near the front left ramp, allowing me to view the movement of the left front wheel onto the ramp and its movement forward. It works fine. You could use 2" x 12" planks, giving more room for error, but I opted for the narrower planks in order to increase my width of access underneath the car. 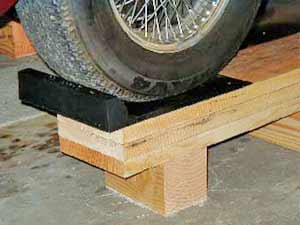 I purchased a rubber wheel place-marker from J.C. Whitney to mount on the front of the ramp. I can see the ramp leading edge with the mirror, but I also wanted to "feel" the leading edge. You could also build a small "overrun" section of ramp to put there, which could be removed once you were parked correctly.

It's a simple and inexpensive project, easily completed in a few hours, and well worth the effort.