Light bulbs burn out. Automotive bulbs are designed to take vibration as well as major changes in temperature and humidity, but they too eventually burn out and need to be replaced. We will show you how...

While early cars had various lighting systems such as coal and carbide gas, two general types of electric light bulbs were utilized in cars for most of the 20th Century. Later cars used sealed-beam bulbs (in which all filaments and a reflector are vacuum-sealed in a glass bulb) and earlier cars used individual bulbs housed in large reflectors. You can assume any vehicle made after WWII used sealed beam bulbs.

Your old car will be equipped with either single or dual headlights. Single headlights have two filaments inside, one for low and one for high beam. Dual headlights use a separate bulb for high beam, but sometimes use a dual-filament bulb for the low beam lamp so that both come on in high-beam mode.

Filaments typically burn out separately. Unfortunately, the bulb must be replaced in that case, even though only one filament is burned out. Let's replace the bulb in this early 60s Ford. It's a very typical arrangement, used by most manufacturers. 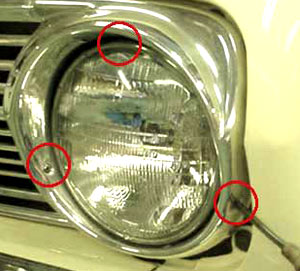 Three screws (circled in red...the top screw is not visible in this photo) hold the headlight bezel in place. Be careful that you don't scratch the bezel when you remove it.

First we need to remove the decorative trim surrounding the bulb. This trim is commonly called a "headlight bucket" or "headlight bezel," and is usually held on with two or three semi-hidden screws. 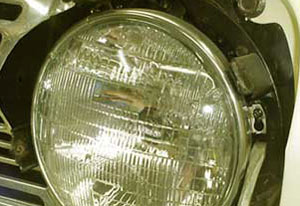 With the bucket removed, you can see how the bulb itself is held in place by a chrome or stainless steel ring. Caution! Don't confuse the ring's mounting screws with the headlight adjustment screws. All you want to do is remove the headlight without affecting the adjustment. 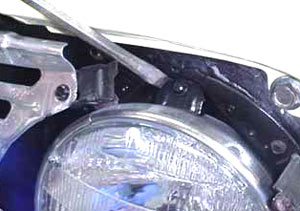 You don't usually have to remove the ring's screws. Normally the ring can be removed by loosening the three screws and then rotating the ring to allow the screw heads to clear the ring's enlarged holes. As you remove the ring, keep one hand on the bulb so it won't fall out. 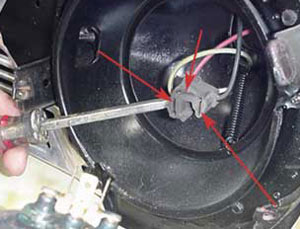 Notice that the bulb is attached at its rear by a large electrical connector. Sometimes this connector is hard to pull off, so take your time and gently wiggle the connector side-to-side as it pulls off. Yanking too hard or twisting can break off one or more of the bulb's metal connections. This isn't a big concern if the bulb is burned out, but using too much force to push the connector on a new bulb can result in the same problem. 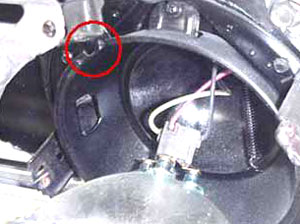 Slots in headlight assembly line up with the tabs on the bulb.

Take a look at your bulb. Notice that it has several rectangular "steps" cast into the outer diameter. These line up with corresponding rectangular depressions in your headlight socket assembly. Their purpose is to prevent the bulb from rotating and to keep it right-side-up.
Once your new bulb is connected to the wiring harness, just gently place it back into its socket and, while holding it, replace the retaining ring. Rotate the ring to its correct position and tighten the screws. 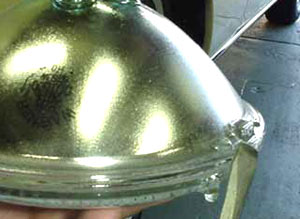 Tabs on side of bulb assure that bulbs remain in a fixed position in their sockets.

Replace the trim bezel, clean up any fingerprints or dust, and there you have it!