Back in the mid 90s we were looking for another car restoration project. One came to us in the form of a 1954 Jaguar XK120 Fixed-head coupe. It had been parked for many years and was "not running," a description that proved to be a vast understatement. In fact, its owners had attempted a restoration and had paid to have the car completely dismantled. Over the years some work on the project was accomplished, but its various components were handed down from shop to shop and mechanic to mechanic. Eventually the Jag's parts had been scattered over four distant locations in Maryland. It was — in every sense of the word — a true "basket case." 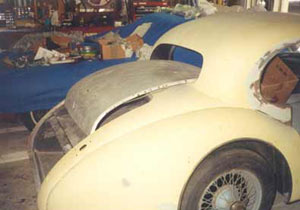 A lot of body work had already been done and the body looked pretty good going in, but looks can be deceiving.

Common sense would have dictated that we walk away from such a disjointed project. There was no accountability, little or no detailed records of the work done and no parts inventory. That said, let us stop here to give a piece of valuable advice: For those who are contemplating the restoration of a favorite car and who have never done so, DO NOT buy a car in pieces! Working on a basket case project is very risky, requires loads of experience and generally ends up costing far more than anticipated to complete. It is always — ALWAYS — safer to buy an assembled, complete, running car and then take it apart.

However, we were aware of the inevitable missing parts and had done a restoration of an XKE, so familiarity and experience won over common sense. We purchased the car from the wife and son of its original owner. It was built on October 23, 1954 and shipped to Morocco, where it was loaded into the bomb bay of a B 47 and flown to Plattsburg, NY (this practice was common in those days and served the dual purpose of enhancing officer morale — by letting them smuggle cars back home! — and eliminating the high import duties on expensive cars). The owner rarely drove the car, but never stored it in a protected place or covered it. Therefore, when he died in 1982 the car had less than 20,000 miles on the odometer but had deteriorated badly. The futile attempts at restoration — and the disassembly of the car — resulted in its passing to us for a relatively small amount of money. 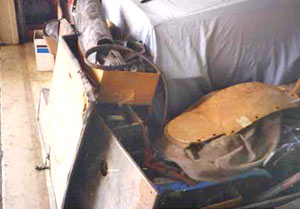 Parts, as they arrived...a lot of work ahead of us.

It took two days of efforts to collect the car's pieces, scattered as they were over a 50-mile radius. One was devoted to picking up the rolling chassis and body and the other to gathering what was left of the interior and engine. Once the stuff was at our garage, a full weekend was devoted to going through the mountain of parts. After weeding out several hundred non-Jaguar (and even some non-automotive!) parts, we sorted everything into sub-assemblies and assessed the project.

Here's Where It Gets Dicey!

At this point our estimation was that the restoration would take 400-600 hours, probably stretching over two years. As things turned out, the two-year time frame was correct but the hours nearly doubled. The condition of components was as follows: 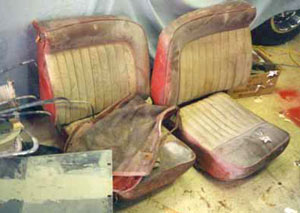 They look comfey, don't they?

The Restoration, In a Nutshell:

Having rebuilt many engines of all types (including a few XK engines), we found that particular part of the restoration relatively simple. The only difficulty with these engines is the valve adjustment, a tedious operation that involves several removal/installations of the camshafts until all tolerances are properly set. A harmonic balancer was found through Hemmings Motor News and a visit to Carlisle yielded enough MG and Healey generator parts to make one suitable for the Jag. Of course, every opportunity to test-run the engine was taken advantage of. After assembly it was easy to attach the gearbox and clutch and mount everything onto the chassis.

It took a while to create a wiring harness but we were able to take advantage of using modern wire and excellent quality connectors. The wiring was run through the chassis before mounting the body. After that, the wiring harness was properly fitted throughout the car and all systems were tested for operation.

After the bodywork was done and the doors, trunk and hood were properly fitted there was just enough good weather left to paint(daytime temps above 50 degrees, otherwise the paint won't cure enough to sand). Our personal favorite material for painting is catalyzed enamel, so the car got four coats. It was sanded and coarse-buffed right away but we saved the final polishing operations for later, to limit the inevitable scratches, dings and "brushes with stupidity" that accompany the reassembly process.

The next 200 hours were spent making up the interior. First, enough leather was purchased to sew up new seats and console covers, with matching vinyl for the door panels and trim parts. Upholstering the seats required all new foam (not to mention rebuilding the wood seat forms) and this was done over the winter. Part of that time was spent remaking all the wood pieces out of marine plywood or solid cherry, because both are resistant to expansion with temperature. We then veneered them with Carpathian Elm burl. The finishing operation required seven coats of polyurethane varnish, each needing 24 hours to cure before sanding. We realized that manufacturers and professional restorers use lacquer because it's fast and easy, but we prefer polyurethane because it gives a deeper gloss and lasts many years longer.

After sewing up a new headliner and installing it the rest of the interior could go in. We spent slightly over two weeks to accomplish the complete fitting out of the interior, once all the components were made up and tested for fit and finish. During this time we were able to obtain an old rear window (it was the only curved glass on the car). We cut our own glass for all the other windows, using tinted safety glass.

Lastly, we made a new steering wheel out of cherry and padouk wood and made a matching gear knob of the same materials. The center hub for the wheel came from an old Jag sedan that was parted out. Complete, step-by-step instructions for making steering wheels can be found in our archives.

The finished car took to the road in 1995 and won every show in which it was entered — probably due to its very Bugatti-like appearance. We sold it in 1998 to a collector in Texas though, because it wasn't being used much and we needed space for the next project. Besides, we found the car to be downright awful to drive. It steered like a tractor, had no headroom, little visibility out and the brakes were wholly inadequate for modern roads and traffic. The XK120 is one of those cars that looks spectacular but is nothing sort of unpleasant to drive.

Overall, the "basket case" Jaguar restoration took us 1100 hours to complete and cost about $5,000 more than originally estimated. Some of that extra cost was voluntary, such as new Dayton wire wheels, but most was spent on parts we didn't think we needed.

The project was great fun, however, and we enjoyed the challenge. Our advice to anyone seeking a basket case is this: avoid such projects unless you are an experienced car restorer and the cost of the car is very low to start, or if the car is so rare and desirable that you'd be foolish to pass it up.