In the 1950s, 60s and into the 70s, chrome wire wheels were the choice of thousands of owners who were looking for the "right" dress-up for their cars. Few things look better than Kelsey Hayes wires on a '55 T-Bird or Chrysler Imperial of the same year. XKE's came with chrome wires, of course, and you could get them to fit your MG, Healey, TR, Sunbeam and a host of other cars, not to forget many motorcycles.

Wire wheels had some distinct disadvantages, however. They were difficult to clean, prone to rust, easy to "prang" and much more flexible than steel rims, so over the years they became bent, out of round and somewhat shabby looking. Wire wheels are all about looking good, not about performance. Hard cornering and rough roads wreaked havoc on wire wheels. Oh boy, did they look great, though! 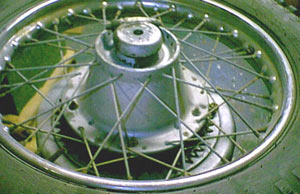 One look at our wheel tells us that it needs to come apart. The aluminum hub has surface corrosion, the spokes are dingy and scaled, the rim shows rust pits and the whole thing is warped and out of round.

Time to make those wires new again? Well, we're going to show you how to take apart a wire wheel (in this case belonging to a Triumph motorcycle) and restore it to show room condition.
Stop! Take a photo of the wheel first!

First, the tire has to come off, and in this case be thrown away. It's long past its prime and unsafe to use. With no tire changing tools, we chose to hacksaw the tire down to the rim. Next, a little judicious cutting and sawing got us through the tire bead without scratching the rim. The tire and its inner tube were removed and discarded, showing the spoke adjusters.

We took the time to spray penetrating oil into each of the spoke adjusters to make removal a bit easier. After that we started our removal, wherein most of the adjusters were relatively easy to unscrew. Some spokes wouldn't come off easily, though, so we got out the propane torch and heated the adjuster for a few seconds, then tried to turn it. Ninety-nine times out of 100 it will loosen up when heated.

Torch aside, several tighter ones needed the help of vise-grips to keep the spoke from turning while we twisted the adjuster (Tip: wrap masking tape around the jaws of the vise-grips to limit marring the spoke's surface). We did break off two spokes, however, so replacements were ordered.

The spokes in this wheel weren't chrome plated, but we decided to make them look nicer (read: shinier) than they originally appeared. To do that we first wire-brushed each spoke to remove scale and rust, then polished each one on the buffer wheel using emery compound. The bright finish we obtained was well worth the trouble, although the wheel's 40 spokes took nearly 3 hours to clean and polish. Tip: You can ready them for polishing faster than wire brushing by laying the spokes and adjusters flat in a plastic tray, then covering with muriatic acid (available at hardware stores and home centers). The acid will remove rust and scale within a few minutes, so careful watching — not to mention ventilation and rubber gloves — is a must. Wash them with soap and water afterwards and discard the used acid according to safety instructions.

The rim was chrome-plated, so we gently wire-brushed the rust out of the inside, then stripped the chrome plating off (This is the subject of an article on chrome plating, but those who don't plan to replate at home should still go to the trouble of preparing the rim. The more work you do the less the plater will charge). Using our plating apparatus, we replated the rim and gave it a polishing.

Next came the aluminum hub. We removed the bearings and seals from the hub, setting them aside for replacement. Also removed were the brake components. Since the hub was pretty seriously oxidized we had to sand the surface down to a smooth enough one for polishing. Starting with 100-grit paper, we patiently hand-sanded the entire hub to remove nicks, pits and scratches. After that we switched to 220-grit paper and sanded the entire hub to remove the scratches introduced by the harsher paper. A final, gentle sanding with 400 grit paper gave us the proper surface for polishing. This took about one hour.

A relatively short time (20-25 minutes) on the buffing wheels netted us a beautiful, shiny wheel hub that was ready for the installation of bearings, seals and brake components. After that it was time for the dreaded reassembly

Not really, but one needs to follow a procedure for reassembly and remain patient throughout the process. Remember the photo you took of the wheel before disassembly? Well, now it will come in handy.

All we needed to do at this stage was to separate all the short wires from the long ones, and then thread each wire spoke into its proper spot on the hub. Our original photo shows us the lower and higher sets of holes in the hub and which way each respective wire is pointed, so all we had to do was lay out everything roughly in its place.

Next, we placed the rim onto each spoke, making sure the arrangement wasn't disturbed. We screwed an adjuster onto each spoke just enough to catch a couple threads. Once the entire assembly was loosely put together we again checked to make sure all the spokes were lined up correctly.

Starting with the short spokes, we tightened each adjuster until almost all "play" was taken out. Then we repeated the procedure on the long spokes. At this point the wheel had assumed its proper shape.

Now came the tricky part. The adjusters had to be tightened far enough to hold the entire wheel in compression, so we first tightened all the short spokes until only a couple threads were showing. At that point we tapped on a spoke, noting its "ring". Then we tightened all the spokes until their ring matched the pitch of the first. This takes a while, so don't get impatient.

After satisfying ourselves that the short spokes were correct we did the same procedure with the long ones. That accomplished, it was time to check wheel runout.

Runout is defined as the amount a device is rotating out of its plane of rotation. If a wheel exhibits runout it will wobble, much like that bicycle wheel you bent when you hit the curb years ago. The reason our wire wheel has runout is that we haven't, as yet, tightened all the spokes to an equal enough tension. We can check how much runout is there by mounting the wheel's axle on the forks and measuring with a dial indicator that we set up with a simple clamp/magnet arrangement. Of course, if you're working on a car wheel you'll have to mount it on the car's axle or create some suitable fixture. 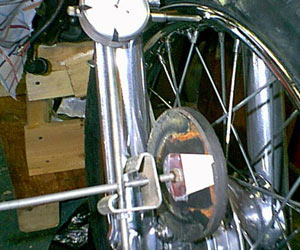 This shows the setup where we found 1/4 inch of runout.

Tip: We made the dial indicator's mounting system using a round magnet from an old speaker, threaded rod and a few nuts. It's adjustable over a wide range of shapes and sizes and the magnet sticks to any ferrous surface, in this case the steel bracket holding the brake hub in place.

All we need to do is rotate the wheel slowly and mark the point of maximum runout with some chalk. We also used the dial indicator to tell us when everything was in the same plane, tightening the spoke adjusters in that area to bring the rim more toward center. If the adjusters had already reached maximum thread depth, we rotated the wheel 180 degrees opposite and loosened those adjusters a little.

Playing around for a while, we finally got the wheel to the point where we didn't notice any runout. We also didn't see any out-of-round condition, wherein the rim's diameter doesn't change as it rotates. That can happen if spokes are adjusted too far off from each other or, of course, if the rim is slightly damaged. 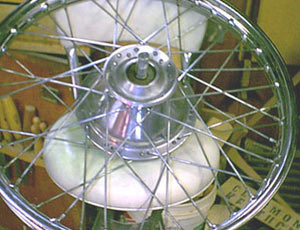 Was It Worth The Trouble?

You be the judge of that. This whole process took us a little over 4 hours, much the same as if it had been an automobile wire wheel. The total cost was just a few dollars for the acid, buffing compounds and polishes. If re-chroming were necessary, significant cost would be added, but no more than if a commercial shop was restoring the wheel. Typical wire wheel restoration charges these days exceeds $200 per good-condition wheel and much more for badly deteriorated ones.